Granted, Alex said those words 20 years ago. And he was adamant about it. Last week-end, he ate cake. Wedding cake that is.

In the summer of 1988, while surfing at Doheny Beach, in Dana Point, California, I met a guy named Alex Rentziperis.

Between waves, as we chatted, I asked, “What kind of work do you do?”

Alex said, “I’m a barber. In a few months, I’m going to open my own barber shop not too far from here in Dana Point. Right up there,” he said, as he pointed in a northernly direction. “How about you?”

I said, “I going to open my own deli, not too far from here in Dana Point. Right up there,” as I pointed in the same direction as Alex had.

That was the start of a friendship that has lasted for 30 years. Later that year, Alex opened the Sports Barber Dana Point, at the corner of Del Prado and Golden Lantern, above where the Still Water restaurant is located now.

In December, 1988, I opened Tutor and Spunky’s Deli on Pacific Coast Highway, next to the Dana Point Donut Shop, across from Rubens Imports, the Mercedes Benz dealer. Our businesses were a half mile from each other.

During the next 30 years, we’ve done a lot together. Most notably, after my divorce in 1994, and after putting up with some unsavory roommates, I finally was going to get to live alone in my Monarch Beach home. That was before the phone rang. It was Alex, calling from his San Juan Capistrano home.

“Toot,” ( the nickname he had given me) he said, “She threw me out. I’m getting a divorce. Got a spare bedroom for a short time?”

So, Alex moved in. Turned out to be for about a year. He often repeated vehemently that he would never marry again.

We took many camping trips to the Sierras together. I can still picture him standing on a huge rock, trying to master fly fishing, casting into the icy waters of Lake Mary. He got a little too far forward on one cast and did a belly flop right into the lake. I told him he’d never make the Olympic team as a diver.

Alex’s passion is ocean fishing. He has a boat and is out on the water once or twice a week. He taught me how to catch sea bass near the kelp beds. He’s been on the cover of Western Outdoor News, the largest weekly fishing and hunting magazine in the country.

Four years ago, Alex attended an age 55+ singles meet and greet event at Tutor and Spunky’s Deli. Alex’s sister, Faye Dalton, encouraged a recently divorced client of hers named Carolyn Young, to attend the same event to meet her brother. I remember that night. Carolyn and Alex seemed enamored with each other. He walked her to her car. They’ve been a couple ever since. Ah, senior dating that has been successful.

This past Saturday, with many members of Alex’s big Greek family and members of Carolyn’s family in attendance, Alex and Carolyn were married in the backyard of Faye and Doug Dalton’s San Clemente home. Mark Rentziperis, Alex’s brother, was the best man. 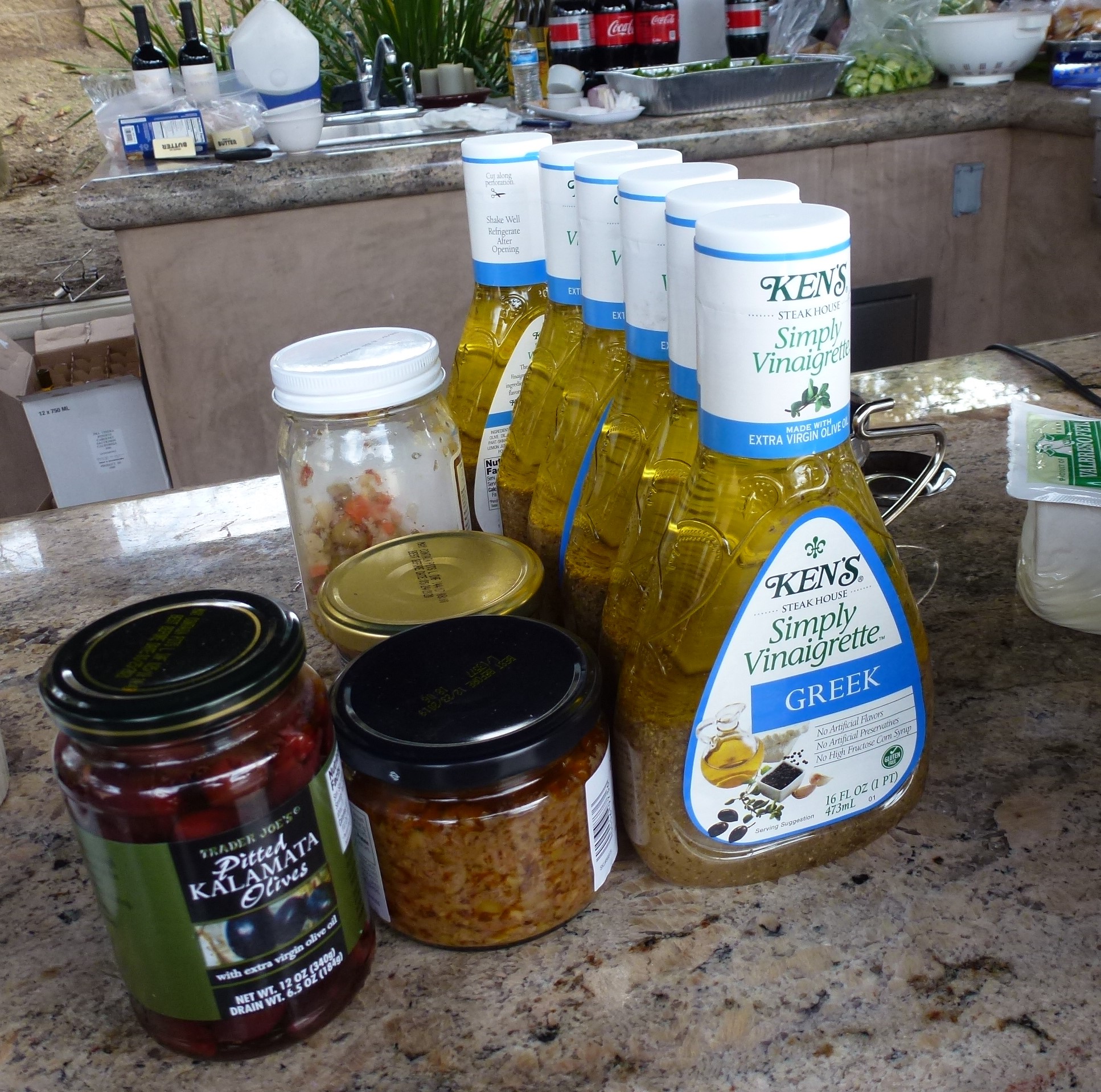 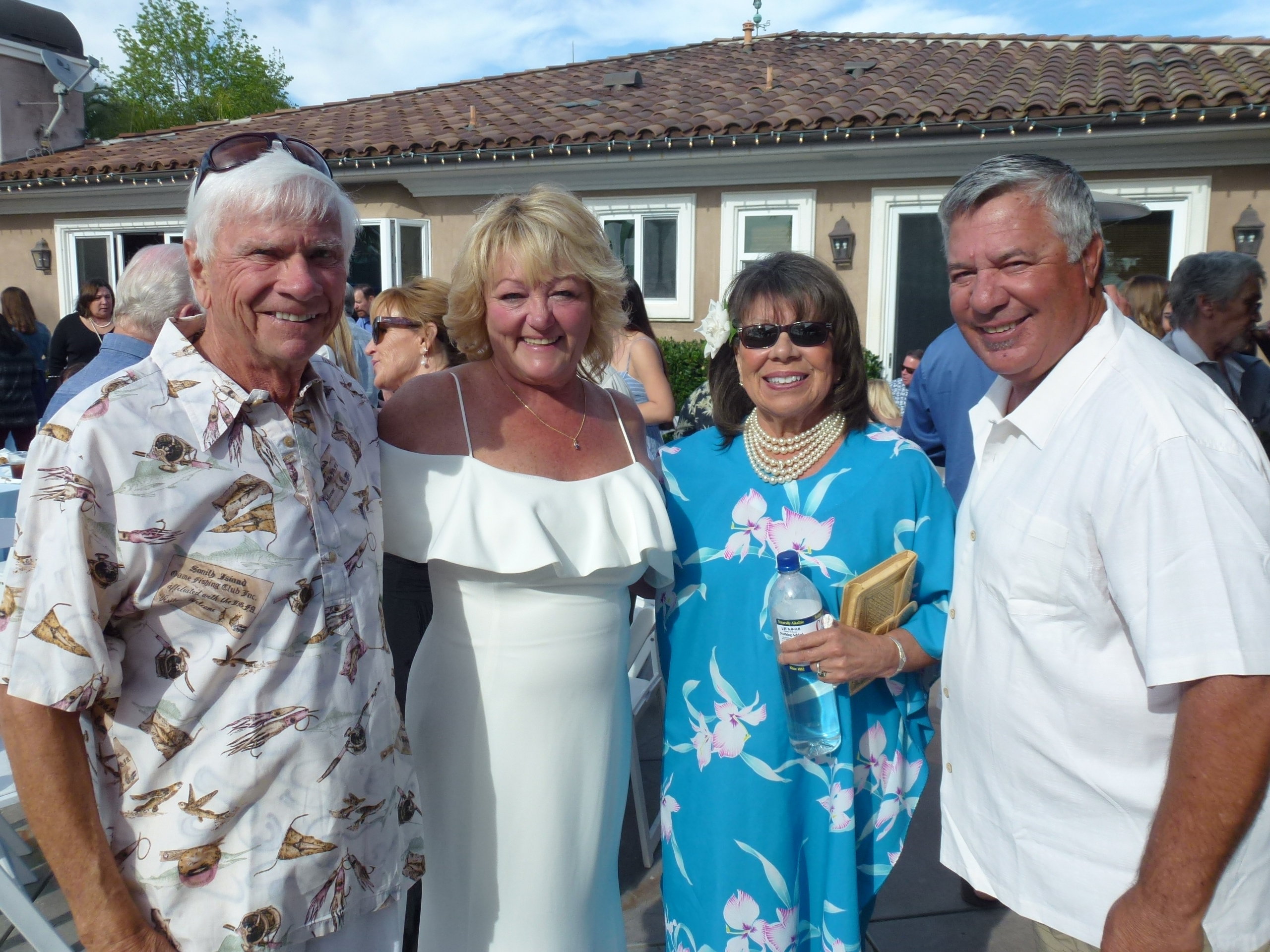 Tom, Carolyn (the bride), Greta, Alex (the groom who said he would never remarry)
(photo by Tom Blake)
Christine DiGiacomo, a San Clemente resident, whose business card reads “Pastor Woman…for such a time as this,” ( http://www.pastorwoman.com), married Alex and Carolyn. Christine and Carolyn have known each other for years. I heard many of the guests compliment Christine on the beautiful, unique ceremony she performed. Christine is a non-denominational minister.

She began the ceremony by reading from Ecclesiastes 3:1-8, which is also referred to as “Turn, Turn, Turn.” That seemed to resonate with the guests, who ranged in age from young flower girls to older dudes like me, perhaps because of the “Turn! Turn! Turn! (To everything there is a season) song written by Pete Seeger and made popular by the Byrds, in 1965. The song’s words are almost identical to the biblical words.

To conclude the ceremony, Pastor DiGiacomo added an unusual touch: Instead of the traditional “You may kiss the bride,” she turned to her friend Carolyn and said, “You may kiss your new husband.” Very cool.

My partner Greta said, “This is the finest wedding I’ve ever attended.” 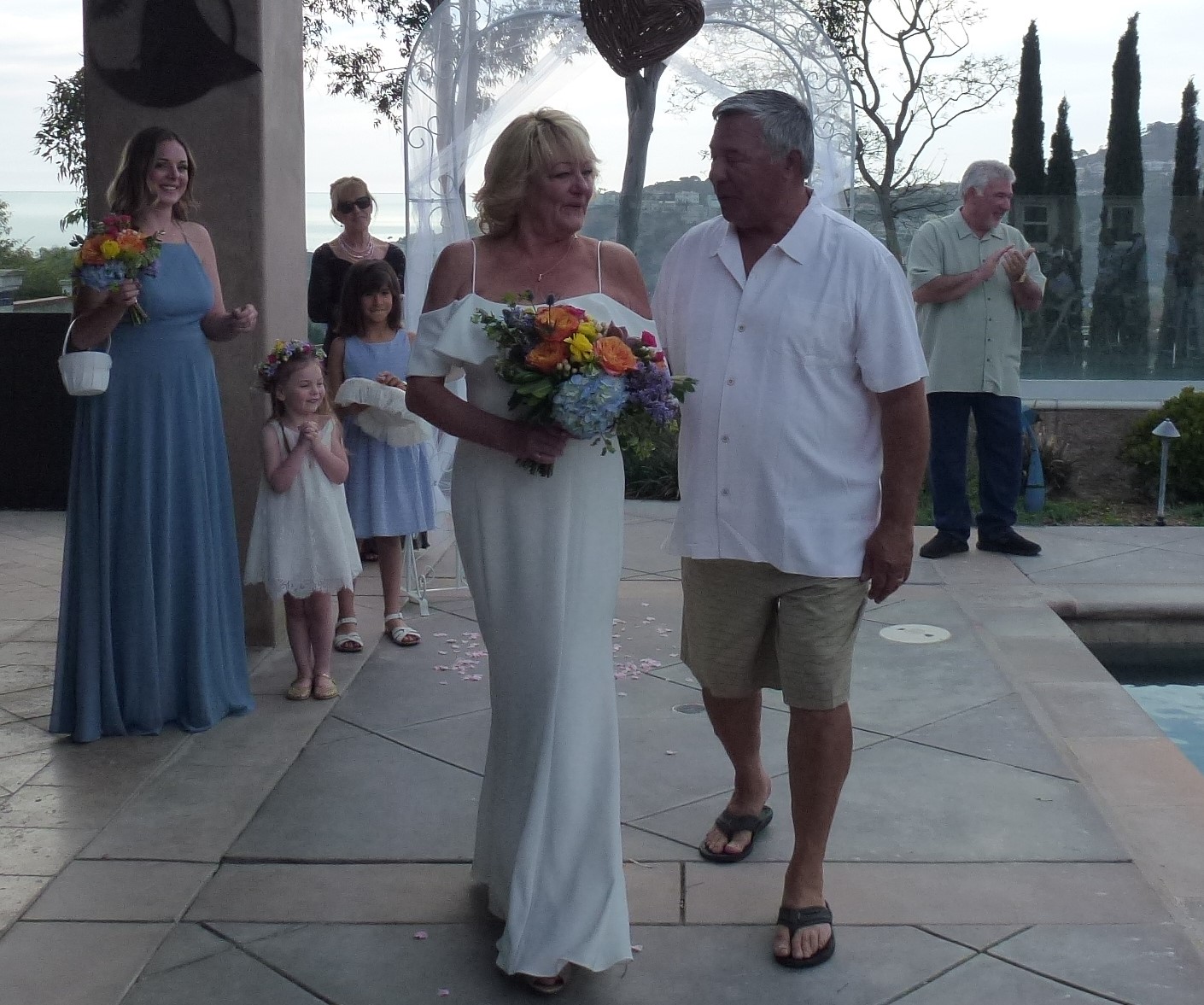 Carolyn and Alex after ceremony

Alex still owns and works at the Sports Barber. Carolyn works at a local bank. They live in Dana Point. Good to see an age 55-plus wedding so hip and fun, and yet with so many millennials in attendance.

Goes to show. Even though you’re over age 55, you never know when or where love might come along; it might even happen at a singles function at your local deli.