On Life and Love After 50 eNewsletter

Shelley, San Diego, “I did not encounter men who lied about their age but back in 2016 when I was on OK Cupid a younger man messaged me. His profile picture was just his face and I could tell he was overweight.

“MY profile stated I was ‘healthy-physically fit and active and looking for the same.’ Against my better judgement, I agreed to meet this man and when he showed up at the public park where I asked him to meet me, he was enormously FAT. He could hardly walk the few steps from the parking lot.

“I didn’t rush off as I wanted to- we talked for over an hour and he told me he needed a hip replacement and he had had a heart attack the previous year. Then, he asked when we might meet again, and he said he wanted to go on a road trip with me!

“OMG!  I was very polite-said I had three other dates lined up in the next few days and would be in touch with him. He emailed me the next day saying what a wonderful woman I was and he couldn’t wait to see me again. I replied I would be in touch. He kept badgering me.

“Finally I emailed him and said I met someone I really clicked with-it wasn’t true but I didn’t want to hurt his feelings. He then began leaving me voicemails saying what an awful woman I was and that I had led him on!

“What? So, I wrote him and told him not to communicate with me again.”

Rosemarie, South Africa, “I’ve been dating for a long time, and always say my right age, which is now 80, and post full-length pictures as well.

Cynthia, Watertown, New York, “You matched me up with a gentleman last year. Well, we were politically incompatible and quite frankly there were no sparks for me. We went out three times. I appreciate the try. If you come across someone 56-76 years old. (I am 66).”

Tom’s response to Cynthia, “Regarding that attempted fix up a few months ago. The reason I suggested you two communicate with each other was that you lived within a reasonable distance to each other in the upstate New York area.

“From that experience, you now know firsthand why I’ve often said I’m not a matchmaker. There was no way I could know about the potential chemistry or lack thereof between the two of you, and I hadn’t considered that your political preferences might be different.

“That comment brings up another important compatibility measure on dating profiles: Political preferences. For some, that can be a deal breaker so being upfront about that on one’s profile is a good idea to keep two people from wasting each other’s time by meeting in person—especially in this president-election year when feelings are escalated.

“I avoid writing about politics as there’s a chance that nearly half of my readers might get upset. That and religion. Those two topics I avoid, which may be one of the reason’s I’m still writing after 27 years, and nearly 4,000 articles.

“At least you and I tried to find you a potential mate.”

Robbie, Orange County California, “Absolutely a turnoff when you take the liberty to fib about your age. It begins a basic level of distrust (for me) that would be very hard to overcome. So much easier to be honest and straightforward even if it’s meeting for a coffee.”

Susie, Virginia, “I have been tempted to put down a younger age. I just turned 78 and look years younger and act it too, but I feel my age is holding me back to meet men.

“I have always dated and married men that were five to 10 years younger than I, but now it seems men are not interested in a woman my age. What give’s Tom?”

Tom’s response to Susie: “Your comment that you’ve always dated and married men five to 10 years younger makes me wonder how many times you’ve been married.

What give’s? It’s likely not a lack of interest as much as a lack of men. At your age, 78, the ratio of single women to single men is approximately four-to-one. And women sometimes point out that not all of the men included in the ratio are relationship material. Of course, that same sentiment is felt by some men about the women as well.

Rhonda, South Orange County, California, “Interesting and somewhat amusing topic here. Your fact-finding mission and hypothesis on the rationale (of the 81-year-old man who lied to Arlene) are on point. And your math skills as well!

“I was on a dating site and one guy I met up with was also a good eight years older than he stated and when we discussed it, he claimed he couldn’t change it on the site. Seriously?

“If a guy is deceptive about his age, then what ELSE is he being dishonest about? What a way to start a relationship – based on white lies, half-truths and? Not for me!

“I have integrity and good moral character and that’s just part of who I am, even if I’m ‘too old’ for some. Someday I’m thinking a man will be glad to have me by his side ‘as is!”

Cynthia S., Kansas City, Kansas, “I am on Silver Singles and eHarmony and I totally understand what Champ Arlene is saying about men lying on their profiles.

“Even worse than age lying is posting old photos in order to appear more attractive. Recently, I had two cases in which two gentlemen posted nice looking pictures. When I queried them on how old these photos were, they said yeah maybe seven years or so. I then requested that they post current pictures as I had done.

“The pictures that were then posted on their profiles were amazing. The men looked a lot older and in fact, were almost not recognizable from their original photos! Ye gads, how would I recognize them if I met them at a restaurant? This is frustrating to say the least.

“I understand they want to attract women, but I say, ‘post recent photos and be truthful about your age; it will be better for you in the long run.”

Jackie, Florida, “Right out lying is wrong! How can you trust anything else if they lie on one thing? It doesn’t hurt to do a background check or investigation if the relationship is getting serious. Amazing what you can find on the internet.

Tom’s comment: As mentioned earlier in this eNewsletter: check out a potential date’s person’s political leanings, if that matters to you. Knowledge is power, or something like that.

Laurie, South Orange County, California, “After a year on eHarmony, I found a great guy.  After jumping through their hoops and talking on the phone several times, we met up. The photo was apparently from several years in the past and he was heavier by far than in the photos.  We had a good time, though, and when he called me the next day, I told him he misrepresented himself.

“I was blunt about his appearance, but we kept talking and he apologized, claiming not to have any current photos.  I suspect it was one of those half-lies. We dated for nearly three years, so no regrets. He always teased me that my confrontation on the phone was the “morning massacre.”  I’m nice or I would have called our first date the “rude awakening.”

We’ve had many serious comments (with one or two humorous exceptions) on this topic in the last three eNewsletters. So, I put together a brief senior man’s online dating profile for fun, with a huge tongue-in- cheek. Please men, do not take it seriously. 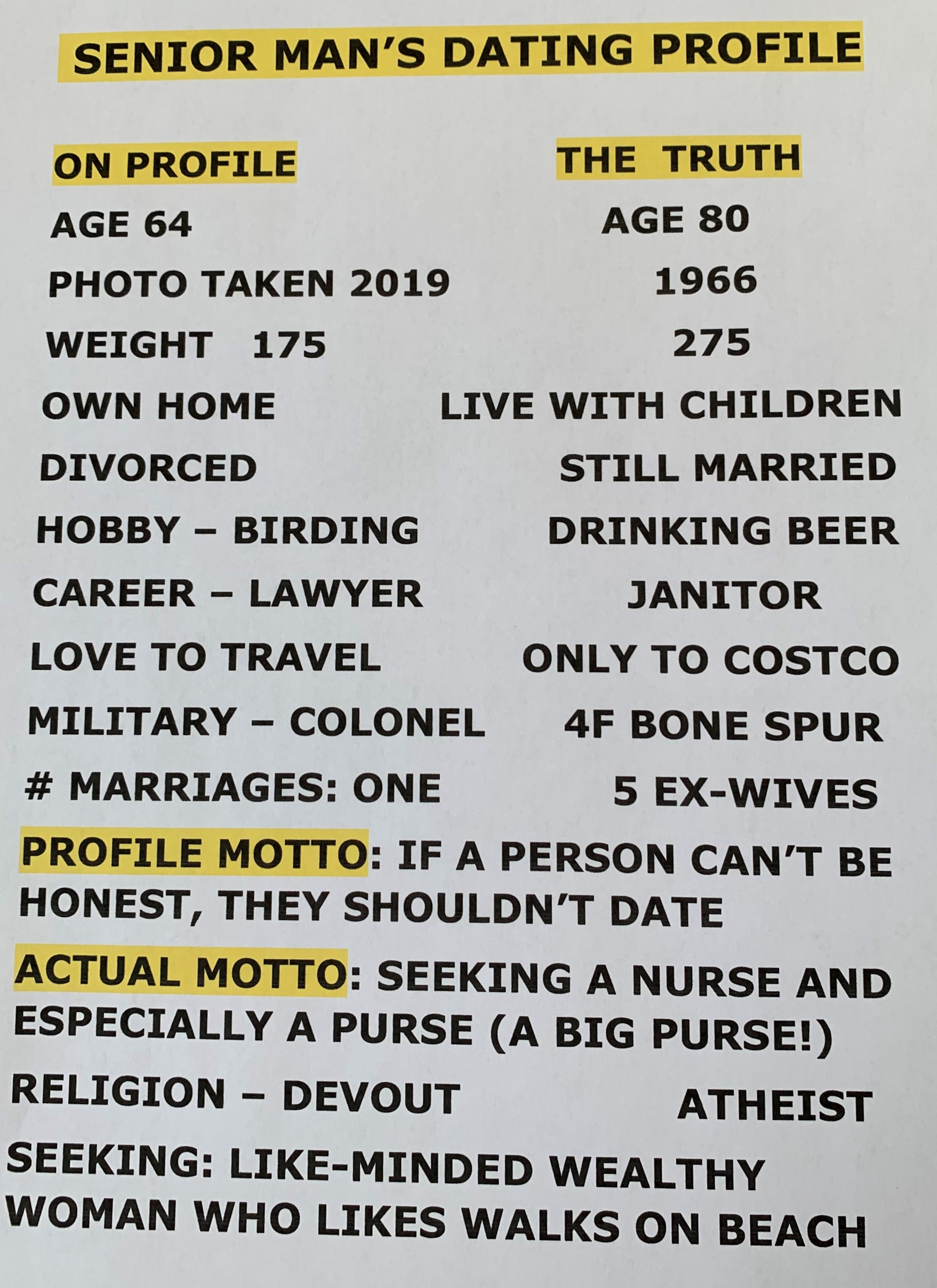 Next week will bring a new topic pertinent to older singles. What will it be? It depends on what lands in my inbox.