On Wednesday, Greta, my life partner of 21 years,  asked me to go to a late-afternoon movie with her. She loves movies; I tolerate them. But when a great one comes along, I usually thoroughly enjoy it.

“Sounds like opera to me.” I rather non-enthusiastically replied, in that opera isn’t my favorite type of music.

However, I didn’t want her to go alone so I agreed to go. The Wednesday matinee at that theater costs just $6.50 for seniors, which made the outing a little more palatable.

And guess what? As often happens with movies, I loved it. Producer Ron Howard created a masterpiece. It’s a documentary, not a film with a plot or story line. In scenes featuring Pavarotti, the footage and music are authentic Pavarotti himself. There isn’t a stand-in actor pretending to be he.

His enthusiasm for life shines through.

I related to the movie for three personal reasons.

There is a scene where Pavarotti, an Italian, joins for the first time, the other two great tenors of his era—Spaniards Placido Domingo and Jose Carreras—where they officially became known as The Three Tenors, at a concert in Rome at The Baths of Caracalla on July 7, 1990. The record album from that concert became the best-selling classical music album of all times. 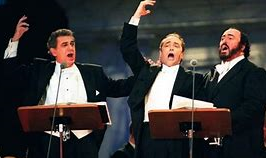 The concert was on the eve of the 1990 FIFA World Cup of Soccer Final, which is how Pavarotti convinced the other two tenors to join him. They were all avid soccer fans.

Why did this Three Tenors scene from 1990 in the movie appeal to me personally? Because, 30 years earlier, on August 24, 1960, while traveling through Europe for 85 days in a VW bus with four other guys, we attended the opera Aida at The Baths of Caracalla.

The opera that night lasted for three and a half hours, so long that the USA satellite “Echo” was visible in the sky as it flew over twice. I also recall four-horse chariots, camels and elephants on the enormous stage.

At the movie on Wednesday, a woman seated behind us was so inspired by the Three Tenors’ performance at The Baths of Caracalla, she stood up and applauded.

The second personal reason I enjoyed the movie is also related to the Three Tenors. Recently, I’ve been sorting through old picture books while working on my family’s genealogy. A few days ago, I came upon a concert ticket stub from a Three Tenors concert in San Jose, California, dated December 29, 1999.

I found out my sister, Christine, and her boyfriend at the time, Bill, took my mom to the concert. Mom said it was one of the greatest treats of her life. The tickets were mighty pricey. Finding that ticket stub was a nice memory of Mom.

The third personal reason I related to the movie was because of the charisma and voice of Pavarotti. Those two qualities in him reminded me of the same qualities in Johnny Cash.

I believe the movie Pavarotti will win Academy Awards for best musical soundtrack and best documentary. Ron Howard was a genius to use Pavarotti’s true voice throughout the movie, and the true voices of all other singers in the movie.

On the other hand, I felt one of the shortcomings of the movie, “Walk the Line,” the story of Johnny Cash’s life, was that his true voice was not used. Joaquin Phoenix did a great job, but the movie could have won an Oscar for best musical score had Johnny’s voice been used. It was unique like Pavarotti’s and his charisma was amazing to observe.

And speaking of other voices in Pavarotti, Bono of U2, had an important part in the movie. He and Pavarotti did a duet together, initiated by Pavarotti, and Bono was extensively interviewed as well. Bono’s appearance enhanced the movie.

There will be critics of this movie. Opera critics who may think by joining together The Three Tenors bastardized true opera. And later, he sang with other rock and roll singers.

And, other people will feel that Pavarotti’s infidelity damaged his singing reputation. They may be right. And that behavior was wrong.

But Pavarotti was a great humanitarian and donated millions to charities. Not to mention, he is arguably the greatest tenor of all times. His love of all people was evident throughout the movie.

For me, I went from thinking, “Oh no, an opera movie, to walking out of the theater thanking Greta for asking me to go with her and for relishing the memories the movie ignited in me. It was a rewarding and fun senior date on a Wednesday afternoon.