The importance of appreciation in relationships

Recently, a friend said to me, “It will be nice to be appreciated by someone rather than be taken for granted.”

He was referring to a romantic relationship that he had recently terminated. It was a difficult decision, one he pondered time and time again–because he cared about her—but each time he thought about it, he reached the same conclusion: he wasn’t being appreciated by her. He’s a good man with lots to give.

His comment struck a chord with me. I recalled that years ago, I had written a column titled, “Appreciation.” I didn’t recall when I specifically wrote that article, but remembered it was in the autumn of the year, a time when many people, who are in less-than-satisfying relationships, evaluate them. The holidays tend to do that to people.

In sorting through my column archives, I was amazed to locate the “Appreciation” article. I wrote it on November 16, 2000, based upon conversations with three people, who had independently commented to me about how appreciation can affect relationships, both positively and negatively.

Much of what I wrote is still applicable today. So, I’m going to quote a few of the observations from that 19-year-old article. The observations might help people who are feeling under-appreciated or unappreciated. Expressing appreciation is a pretty simple concept. Sometimes, however, we just need a little reminder of its power.

I wrote: “Life, day-in, and day-out, is trying on most of us. There are demands on our time. We’re so busy, we may not say ‘Thank You,’ to our mates often enough.

“Expressing appreciation to a mate, and actually, anyone, is a considerate, thoughtful and kind act. It shows respect and acknowledges to a partner that he or she is trying to put us first. 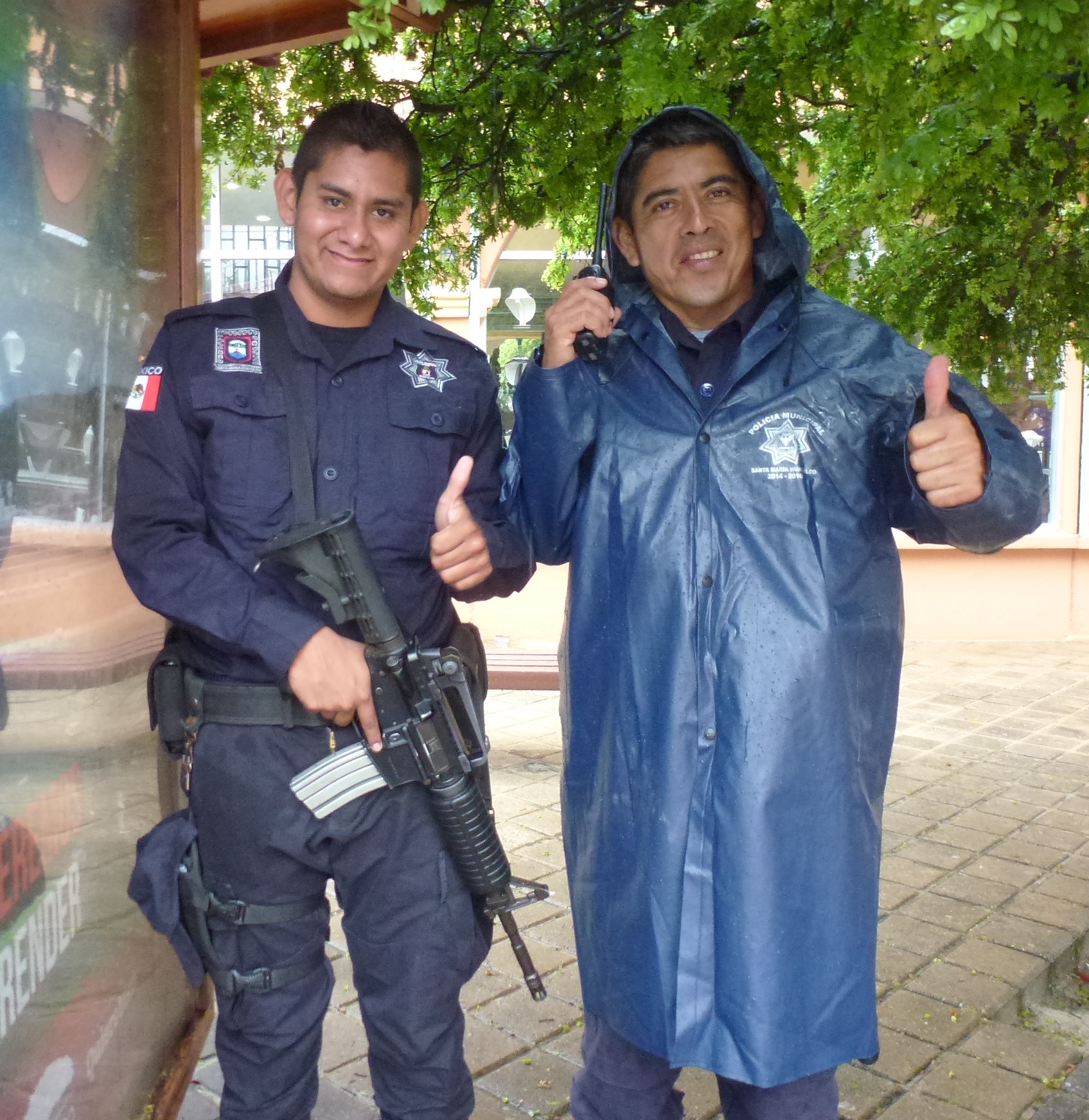 Appreciation and a smile work everywhere in the world. I asked these two Huatulco, Mexico, police officers to help me open a bottle of tequila. The officer in the raincoat whipped out a switch blade knife and pried off the top. I thanked him and his buddy profusely. My appreciation elicited this warm response from them. (photo courtesy of Tom)

“People like to be recognized. When they do something nice for a mate, or another person, regardless of how small or minor, it’s good to hear that what they did was appreciated. Appreciation goes a long way to strengthen relationships.

“When people are appreciated, they will keep looking for ways to please their mates; appreciation and recognition are positive taps on the shoulder.

“However, when people take their mates for granted, and don’t notice or appreciate the little things done for them, relationships can be adversely affected.

“A lack of appreciation from a mate might be a red flag that the mate doesn’t care enough about the relationship. That doesn’t mean the mate is a bad person, it could be as simple as the mate isn’t in love.”

The year 2000 article also stated, “When a mate doesn’t appreciate you, and that behavior repeats itself, you may say to yourself: ‘Screw it, I won’t take being treated that way anymore.’

“Lack of appreciation creates disappointment and disillusionment. When it happens too often to a person, he or she may slowly stop caring. The relationship suffers. It’s like decay in a tooth. Let it go along enough without remedial action, and you’ll lose it.

“Criticism of a mate and finding fault with him or her, is a form of anti-appreciation. It’s demeaning to the person being criticized. Perhaps the criticizing person wants out, but that’s a chicken way to handle it.

“I’ve written about new singles making a list of the qualities they require in a mate. High on their lists should be a partner who appreciates them. In return, they must do the same for the new partner.”

I ended that article from 19 years ago with these words: “One of the dangers in long-lasting relationships—marriage or otherwise–is that the appreciation for each other can start to wane. If that happens, watch out. Look at the divorce rate. Lack of appreciation is one of the factors.”

Such may have been the case with my friend who confided in me. In his case, the decision to move on, is, in my opinion, what’s best for him as well. Moving on is always hard, but when it’s best for you, you’ve got to do it.

Lesson learned from 19 years ago, and still applicable today: If you appreciate receiving appreciation, don’t overlook giving it. It’s a powerful love tool.