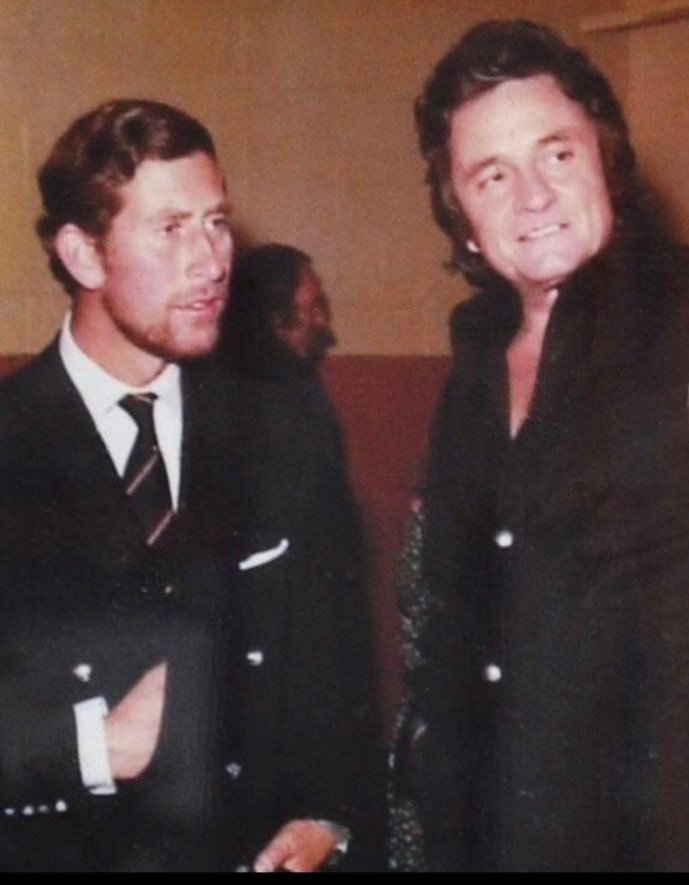 On Life and Love After 50 eNewsletter (special edition)

Our Champ Andrew emailed on Tuesday a “heads up” of a Twitter post by Rosanne Cash, the youngest daughter of Johnny Cash. Andrew didn’t know if I had seen the @rosannecash post. I hadn’t and really appreciate him sending it to me.

I have known Rosanne for 46 years and Greta and I try to see her in concert when she performs within an hour or two from our home. Rosanne is in the Country Music Hall of Fame (along with her dad) and is extremely talented and intelligent. Here’s what her Twitter post stated (keep in mind, this was the day after Queen Elizabeth’s funeral):

“I’ve been debating all day whether or not to post this photo, but it’s just too good to keep it under wraps. I expect a lot of captions, but none I haven’t thought of already. But go right ahead.”

I decided to provide a caption that I can guarantee neither Rosanne nor any of her 103,000 likes followers thought of. As a co-producer of Johnny’s album of train songs, “Destination Victoria Station,” I came up with this caption:

The other guy in the picture is King Charles III in his much younger days. 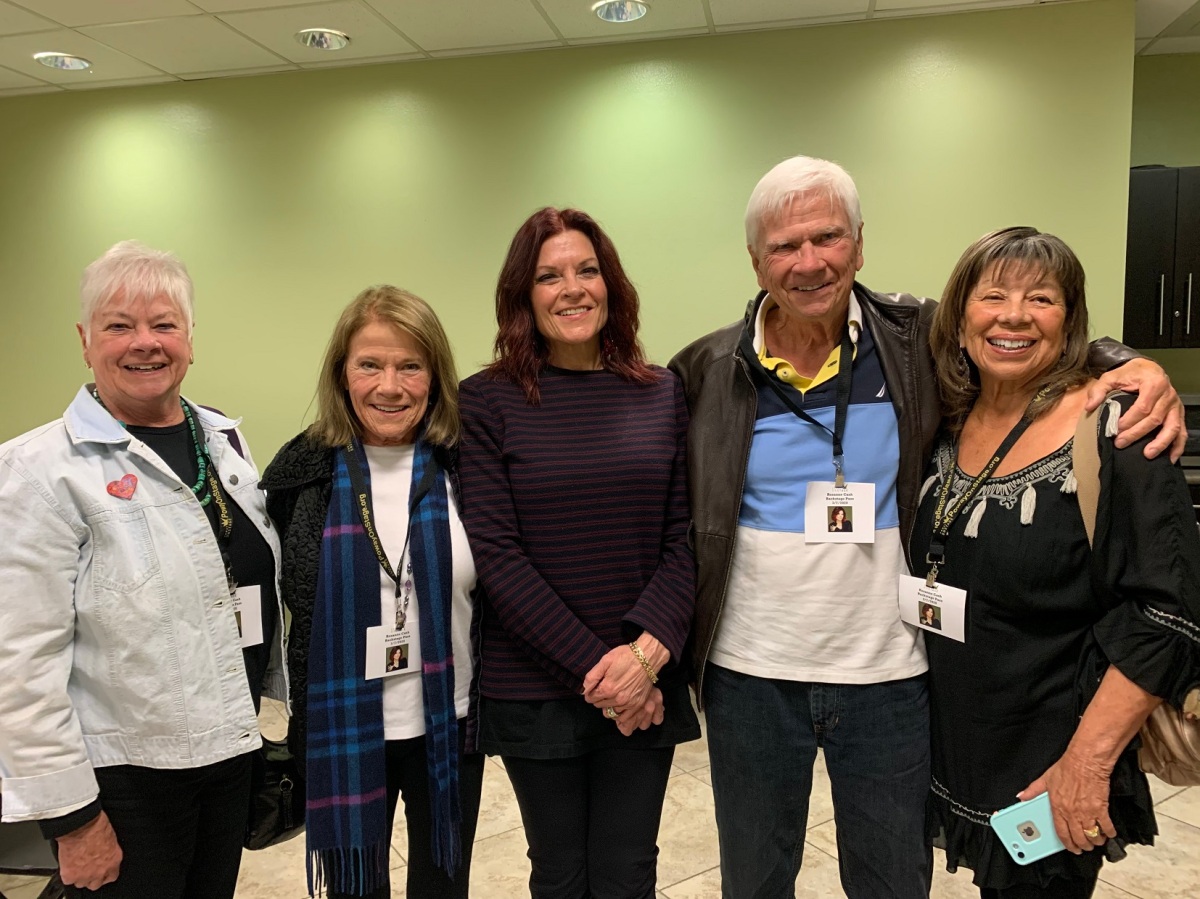 On Life and Love After 50 eNewsletter –  March 13, 2020
A Reunion with Rosanne Cash, an elegant, long-time friend
by Columnist Tom Blake
On Saturday night, March 7, I had a reunion with an elegant, long-time friend. I’ve written about her before, after seeing her at previous reunions. This reunion was so special, I was moved to share it with readers.

Don’t get the wrong idea. My partner of 22 years, Greta, was at my side. And as a special treat to me, so were my sisters Pam and Christine.

The reunion took place at the intimate and wonderful Poway Center for the Performing Arts, located in the quaint city of Poway, California, 23 miles northeast of San Diego, and about an hour’s drive from our home in south Orange County.

And why do I refer to it as a reunion? Because I’ve known this woman for 43 years, met her when she was about 21. Her name is Rosanne Cash, a multi-Grammy Award winner, and a member of the Country Music Hall of Fame.

And if her last name has a familiar ring, it’s because Rosanne is the eldest daughter of the late Johnny Cash. That connection is how I met her.

In the mid-1970s, when I was the marketing director for the boxcar and caboose Victoria Station restaurant chain, I hired Johnny and worked with him for two years. He was our company spokesperson and sang our radio commercials. I also co-produced the Destination Victoria Station record album with Johnny Cash.

Needless to say, on the album, Johnny did 99.9 percent of the work; I just approved the songs that were featured on the album. He did the singing.

In July 1989, my sister Pam and I were photographed with Johnny, at Humphreys by the Bay in San Diego, a cozy concert venue next to the water with a plethora of yachts berthed alongside. 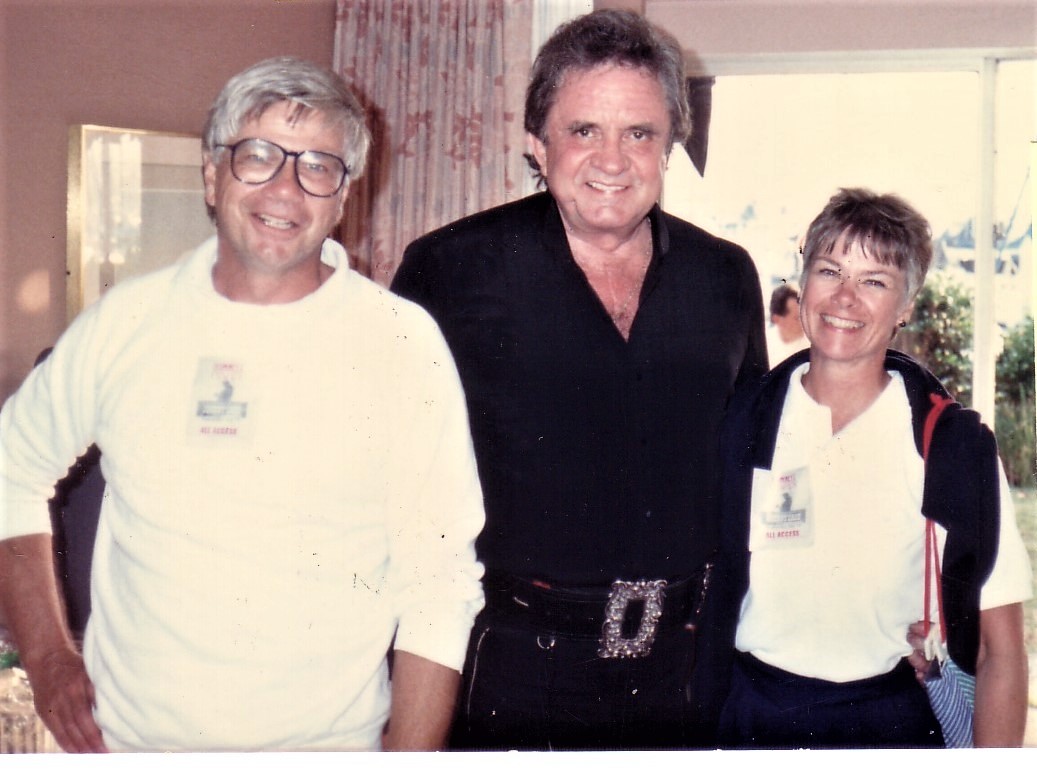 When I published “Middle Aged and Dating Again,” my first book in 1997, Johnny endorsed the back cover with these words:

“In the 20 years I have known Tom Blake, he has become an authority on dating and relationships.”

I’m not sure how Johnny knew that, but I happily accepted his endorsement.

Because my sister Pam was with us last Saturday night, I printed out a copy of that 31-year-old photo of us with Johnny and gave it to Rosanne backstage after the show Saturday night. 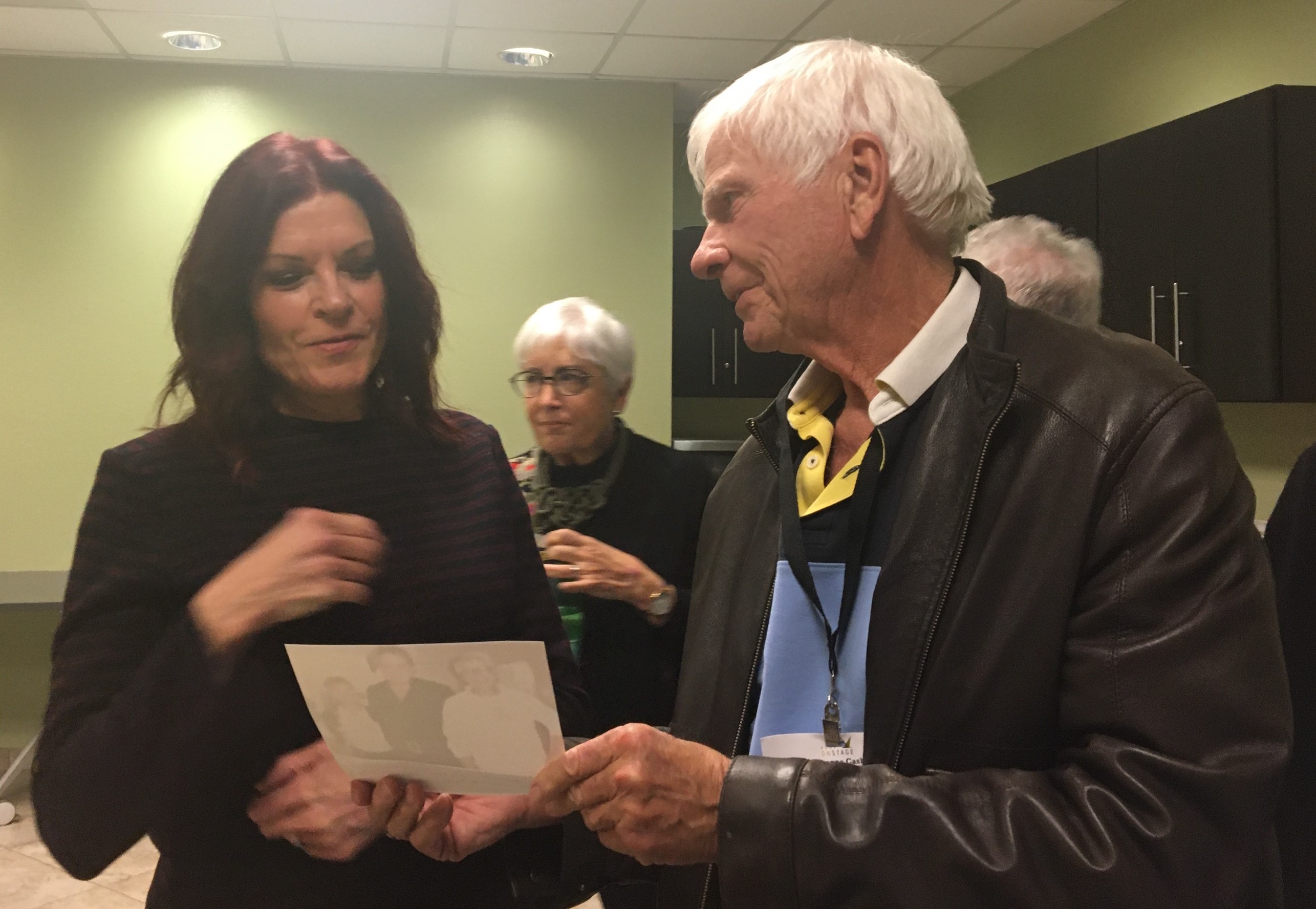 Handing the above photo to Rosanne

Minutes later, a new photo was taken of Pam, Chris, Rosanne, me and Greta. 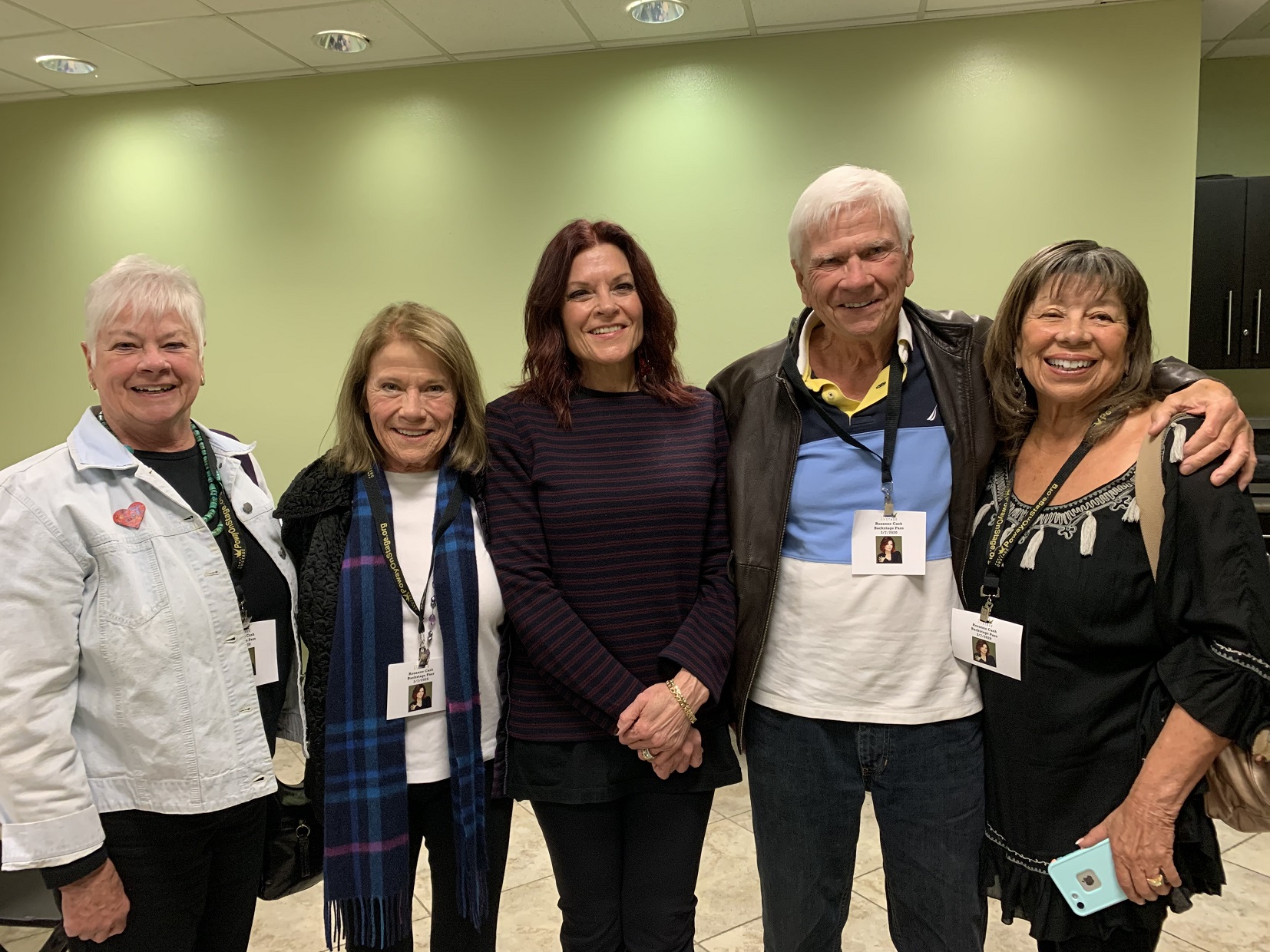 In the last ten years, Greta and I have seen Rosanne, along with her husband/co-writer/producer and arranger John Leventhal, in concert five times, including last Saturday.

When Leventhal saw us backstage Saturday night, he said, “And who are you guys?” I surmised that Rosanne hadn’t briefed John that the Blake clan would be visiting backstage. 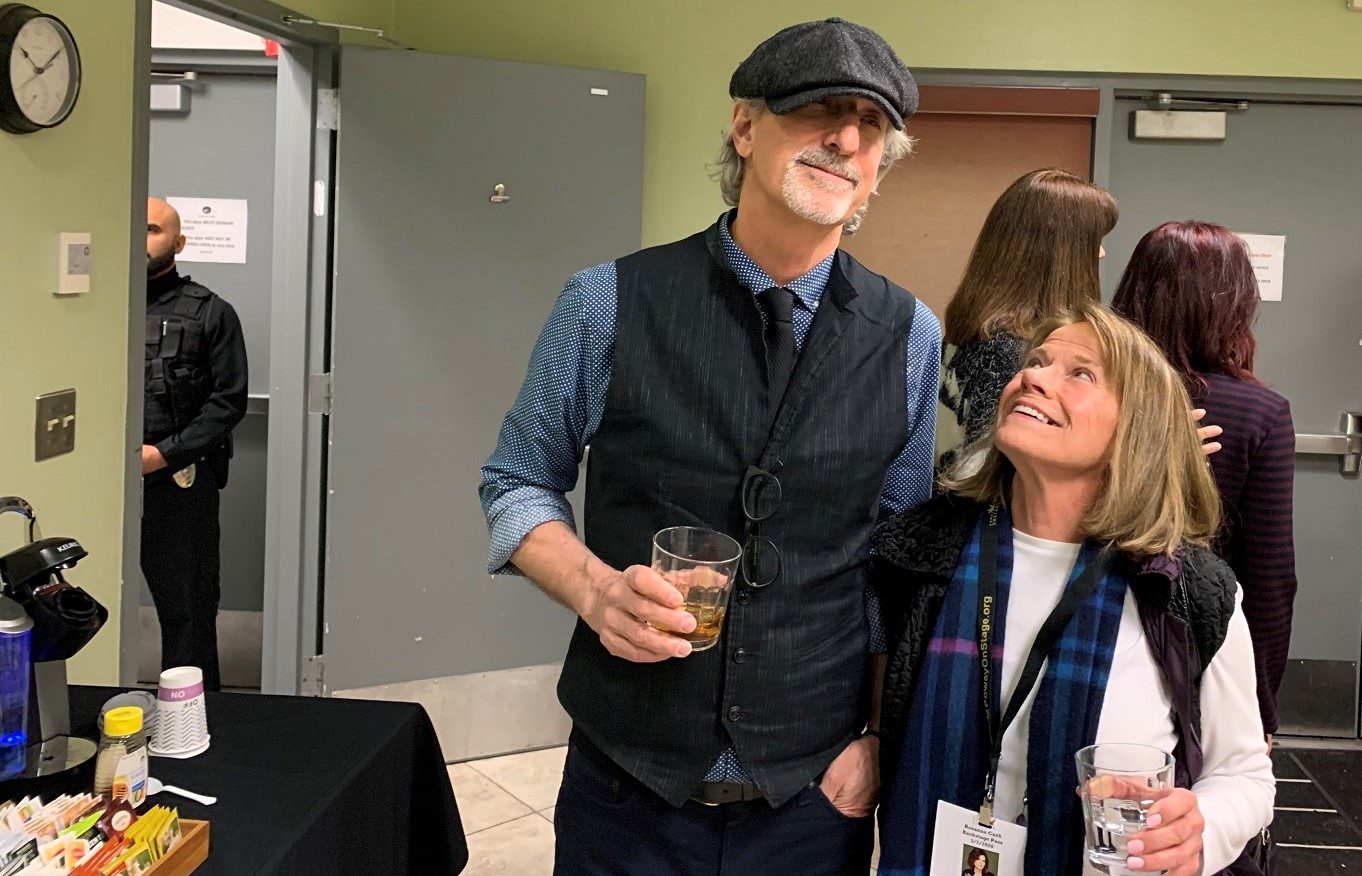 The Poway Center for the Performing Arts is a fun place in which to see a concert. It’s small, 797 seats. The ushers are pleasant, friendly and helpful. Michael Rennie, President and CEO of Poway OnStage, greeted us warmly and was accommodating by leading us backstage after the performance.

Check out their website for upcoming shows: www.PowayOnStage.org. And, unheard of these days, the parking is free!

The audience was mesmerized by Rosanne. Her voice is clear and beautiful. Her stage presence and mannerisms are gentle and polished. Her songs are personal, sang as if she’s telling a story that she experienced.

Leventhal is a master guitar player and joins in on limited vocals. He and Rosanne have been married 25 years. They have fun together on stage. They played without an intermission for 90 minutes.

It’s evident that Rosanne loves the United States; she mentioned unity for our country several times. My sisters were deeply moved by her performance.

She sang “Ode to Billie Joe,” as beautifully as Bobbie Gentry did, when Gentry made it a hit in 1967. At the song’s conclusion, Rosanne said, “That song was recorded 53-years-ago, and people are still trying to figure out what Billie Joe was throwing off the Tallahatchie Bridge.” Her comment triggered a huge laugh from the audience.

Rosanne’s rendition of “The Long Black Veil” was spellbinding. She sang “Tennessee Flat Top Box,” which her dad wrote, and she performed “Sea of Heartbreak,” an old Don Gibson tune.

She ended the concert with her 1981 hit song “Seven Year Ache.”

The applause brought she and hubby John back for an encore; she sang “Wayfaring Stranger” from the Ken Burns 2019 Country Music documentary, a tune her father had also made popular.

Add a future Rosanne Cash concert to your bucket list, it will be one of the most enjoyable 90 minutes of your life.

This article appeared in an edited version of the online edition of the San Clemente Times newspaper on March 18, 2020. Scroll to page 17:  http://www.sanclementetimes.com

There are two parts to today’s e-Newsletter

Part 1 –  An Evening With Rosanne Cash

Seniors often ask for suggestions on where to go when they’d like a little variety in their routines. For our southern California Champs, I can now recommend the magnificent Chapman University MUSCO Center for the Arts, in Orange, California. Most Champs in other parts of the country have similar venues they can visit.

Greta and I had a senior date night there last Saturday (February 2). It was to see Rosanne Cash in concert. Why Rosanne?

When I first met Rosanne Cash, the oldest daughter of Johnny Cash, she was 21. I was the Director of Marketing for Victoria Station restaurant chain, that specialized in prime rib; most of our restaurants were constructed of boxcars and cabooses.

Victoria Station had hired Johnny to sing train-themed radio commercials and it was my job to work with him to ensure the company’s association with him went well.

At that five-hour taping, Rosanne and I sat together in the front row; we became friends and have remained in contact—albeit sporadically–since then.

I’ve watched in admiration as she has matured into an incredible, prolific, composer and musician. I’ve observed her emerge from under her famous father’s coattails, and, become established on her own merit.

In 2015, she won three Grammy awards for best Americana album, “The River & the Thread.”

Rosanne has had 11 songs that reached number one on the country music charts. She has published four books, her most noteworthy, a 2010 memoir, titled, “Composed.”

Last Saturday, February 2, Greta and I attended an evening concert at the magnificent Chapman University, MUSCO Center for the Arts, where Rosanne and her husband, John Leventhal, performed as a duet. She said the MUSCO has the finest acoustics of any venue in which she’s performed in California.

A guy in the audience yelled out, “That’s what Vince Gill said.” She smiled and said, tongue-in-cheek, “Vince is always copying me.” That brought a big laugh from the audience.

Rosanne sang a breathtaking version of the 1967 Bobbie Gentry song, “Ode to Billie Joe, from Rosanne’s “The River & the Thread,” album, and a hauntingly beautiful rendition of “The Long Black Veil,” from The List album, which was based on a hand-written list of 100 greatest American songs her dad gave her when she was 18. She mentioned she still has that list.

She featured songs from her just-released album, “She Remembers Everything,” saying with emotion in her voice, “This is a deeply personal collection of songs for me.”

At the end of the two-hour concert, after playing Seven Year Ache (see link below), Cash and Leventhal received a two-minute standing ovation.

After the second encore song, “Tennessee Flattop Box,” Greta and I went backstage and were able to spend a few minutes talking with her.

When she noticed us, I held up a copy of my 2006 memoir, Boxcars and Prime Rib. Whatever Happened to Victoria Station? and said, “Remember this?” 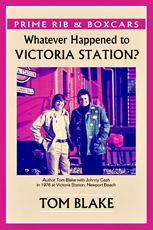 “How could I forget?” Rosanne said, “That’s you and Dad on the cover. Didn’t I endorse the back cover?”

I showed her the back cover with her quote. 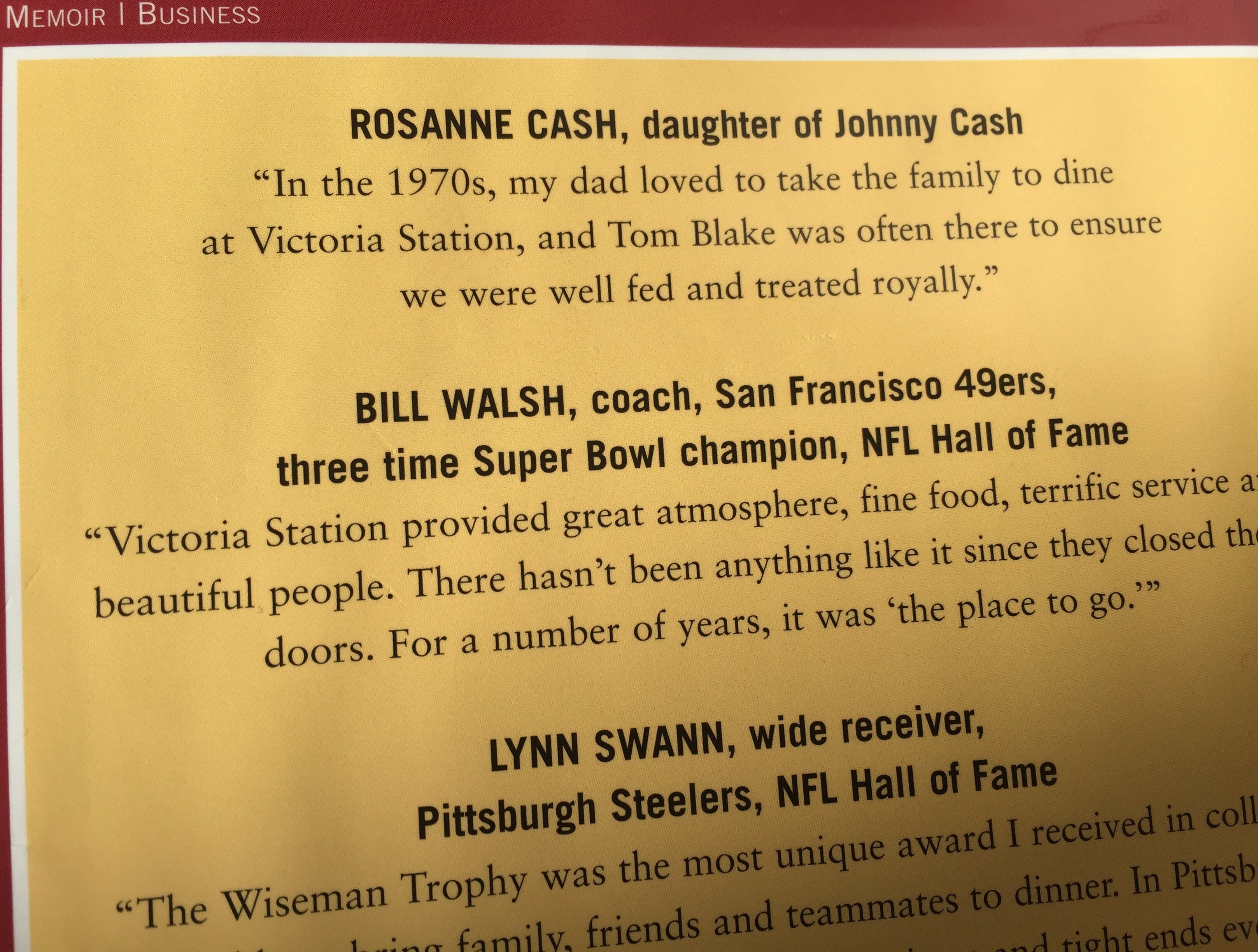 In a bit of an unusual twist, I had her sign the inside front cover of my book, which she did, writing, “To Tom and Greta, with love, Rosanne Cash.”

She said, “I remember you posted the book and my dad’s radio commercials on your Victoria Station ( http://www.VicSta.com ) website.”

I said, “Yup. When you click on the link, after about 5 seconds, you hear Johnny singing our commercials. He sounds as good as ever.”  Note from Tom: If you want to hear Johnny singing the commercials, avoid using the Google Chrome browser (a recent update by them muted the sound). Any other browser works well such as Microsoft Edge.)

I told Rosanne how proud I am of her, and how amazingly talented she’s become. She seemed to appreciate those words, from a friend of her dad’s, whom she’s known for 43 years. 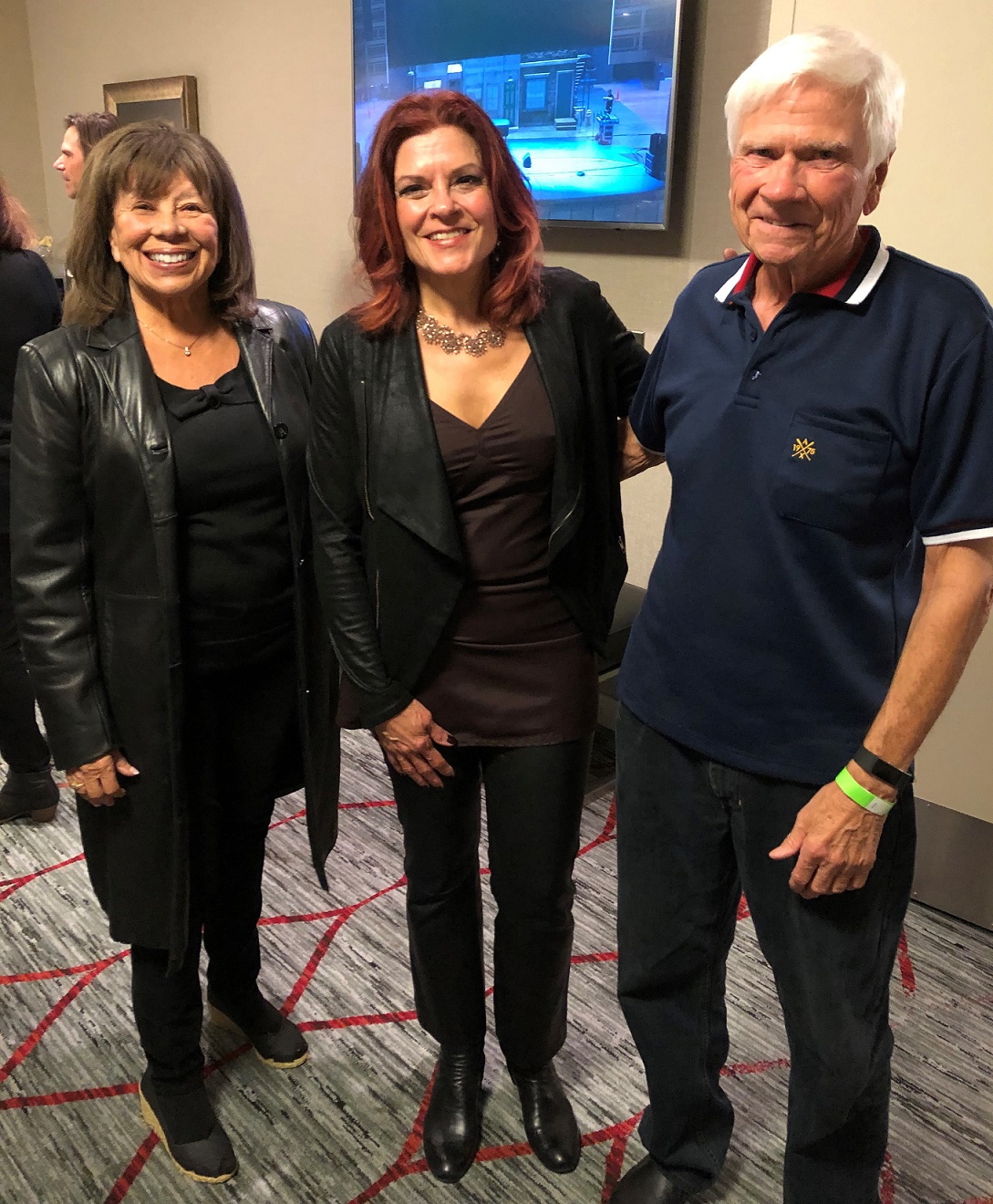 It was a special “date-night-out” evening for Greta and me.

This article appeared in the San Clemente Times Newspaper on February 14, 2019 and the Dana Point Times on February 22, 2019

Some Champs have said they’d like to read the e-Newsletter on Facebook so they can comment and interact with other Champs. So, I’ve created a new page just for that purpose. Hopefully, today’s e-Newsletter will be the first one posted. The Facebook page is titled “Tom Blake Publishing.” When you get a chance, check it out. This is not a closed page, anyone can post comments (at least for now) but not post photos. We will see how it goes.