Does remaining friends with an ex significant other send a message that you don’t want a new mate?

Jody emailed, “My partner and I split up two years ago, and we are now in the “friend zone.”  At first, I was heartbroken, because I had wanted a commitment, but he didn’t love me that way. Now I feel like I dodged a bullet. He is not the right lifetime mate for me, though I love him dearly.

“Do you think by staying friends, spending time together as friends, that I’m giving the Universe the message that I don’t want a new love? Because I do!”

Tom’s reply to Jody: Interesting question. There are two issues here. First, sometimes, when a relationship ends, and we are hurt, we don’t realize it could become a blessing down the road. You subsequently found that he is not the right lifetime mate for you and you were fortunate you didn’t tie the knot.

When my wife of six years left in 1993, with no notice, I was angry, caught off guard, and confused. Only later, did I come to realize her leaving that way had been a blessing.

Why do you say he is not the right lifetime partner for you?

Second, unlike your situation, my wife and I did not remain friends. We are not enemies, over time one tends to forgive, but I have no interest in keeping contact. You say you love him dearly and have remained friends, and you spend friend-time together. You ask if that is sending a message that you don’t want a new love.

It could, if you are seen in public often together. A guy could see you, with him, and surmise that you are a couple. The guy won’t ask you out, even if he’d like to. He would not want to “hit” on another man’s woman.

Also, let’s say you meet someone when you are not with your friend. When you tell the new guy that your ex is now “just a friend,” the new guy might see it as a red flag; thinking you might decide to go back to him, since you love him so dearly. He wouldn’t want to take the chance.

I think it’s nice you are friends, but you may need to break the friendship chain somewhat to open opportunities for someone new in your life. That doesn’t mean you make a big deal out of distancing yourself, but slowly ease away. 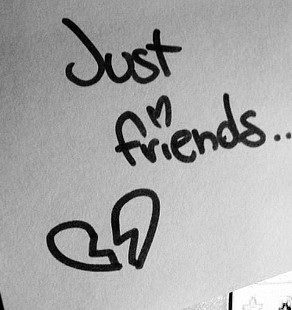 I know of couples where the guy broke up and married someone else. Now, after his divorce, they spend time together again “as friends.” But, the situation has gone on for years, and the woman is still stuck in the same rut, so to speak. Kind of like in the 1977 song by Rod Stewart, “You Keep Me Hangin’ On,” from the Foot Loose & Fancy Free album (link below). Time has passed her by, time that she could have used to seek a new relationship.

Jody stated: “Your comments, Tom, echo my own fears. I guess I don’t want to let go of him completely because at age 65, it’s nice to just have a man ‘around’ to do things with, and to lean on. But on the other hand, if I want a ‘real’ life partner, I am probably going to have to let him go all the way and give up the friendship.

“You asked why he is not the right partner for me. Without sounding judgmental or critical of him (I hope), I feel that he, at age 66, is ready to be ‘old,’ whereas I feel I’m just starting a new chapter and have plenty of energy and get up and go!

“I want to travel, learn new things, meet new people, and not ‘just sit around,’ and I feel he’s more content to be in a comfortable routine. All of this I realized in the two years since he broke off our romantic relationship, and now I’m so glad we aren’t married or otherwise committed and that I still live in my own place!

“I would love to hear the opinions of Champs who might be dealing with similar circumstances.”

Tom’s comment: If he sees you slipping away, he may decide to re-evaluate his life, and kick it in gear, by deciding not to be “so ready to be old,” to try to keep you from moving on. That could confuse the issue by adding baggage to your life and could contribute to not being able to keep a new man interested because of the baggage.

Yes, it’s nice to have a man around at age 65, but there could be a price to pay for that luxury: lost opportunity for a committed relationship. But, of course, there is no guarantee that you will find a new mate either.

We’ll see what the Champs have to say about being in the “friend zone” with an ex. And, whether they think that is sending a message that you aren’t interested in a new love.