On Life and Love after 50 eNewsletter – April 12, 2019 – What Magic Johnson’s retirement from Lakers words might mean to Champs

About ten years ago, one of my employees at Tutor and Spunky’s Deli, my Dana Point, California, restaurant, came into the office and said, “Magic Johnson just walked through the door.” I didn’t believe it until I walked to the front and saw the 6’9” Magic ordering a sandwich.

I introduced myself and welcomed him to the deli. We chatted and then I tried to keep the mob away from him so he could enjoy his lunch. People were running to their cars, getting their cameras and hoping to get a photo with the “Magic Man.”

Magic told me that he and his wife Cookie had purchased a vacation home in Dana Point, next to the Ritz Carlton Hotel. That summer, he returned to the deli three times, and even had a business meeting there with his employees of Magic Johnson Enterprises.

Magic only knew me as Tom, the deli owner; he had no idea I was a columnist. 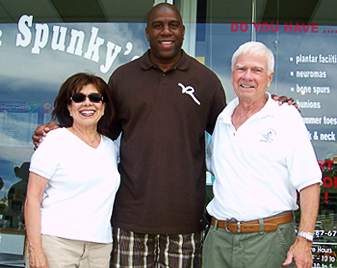 Greta, Magic Johnson, and Tom at Tutor and Spunky’s Deli

Later that year, I was a speaker at the AARP national convention in Las Vegas. In addition, both Greta and I had press credentials as I also wrote columns about the convention, so we had access to AARP press conferences.

Magic was also a speaker that year. Before his presentation, he was introduced at a press conference with about 25 newspaper people in the room, including Greta and me.

While he was answering a reporter’s question, he noticed Greta and me sitting in the front row. He held his hands up as if he were calling a “time out” during a game.

He announced, “Do you see those two people in the front row? They make the best sandwiches west of the Mississippi River in their Dana Point deli.”

People looked at us–two people wearing press credentials–and wondered, what the hell was going on. It was a funny and special “Magic Johnson moment” for Greta and me.

He was one of the nicest guys I’ve ever met. The last time I saw him at the deli was in 2013, this photo was taken. Look at the smile on his face. 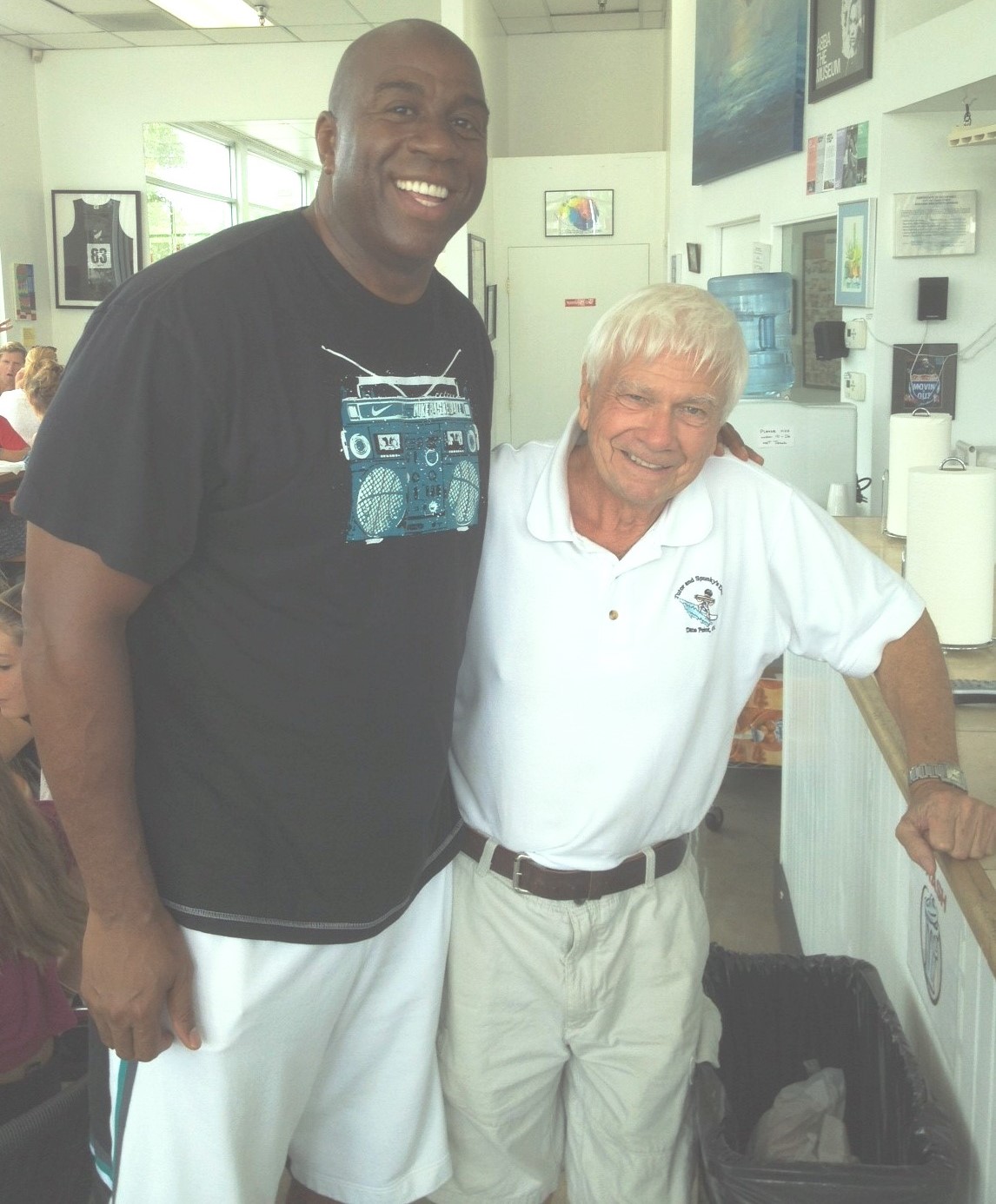 So, that’s my history with Magic Johnson. I did send him a congratulatory tweet after Michigan State (his alma mater) advanced to the Final Four last week in the NCAA 2019 tourney. Of course, I didn’t get a response (he probably received thousands of tweets).

This past Tuesday night, before the Los Angeles Lakers final game of the season, Magic unexpectedly resigned as the president of Lakers basketball operations after two years in that job. His bosses, owner Jeanie Buss and General Manager Rob Polinka didn’t know the news was coming.

At an impromptu press conference, he said “I want to go back to having fun. I was happier on the other side (the non-business side of the sport).”

He has always relished being an ambassador for basketball, which he enjoyed much more than being shackled by the demands of a job that required him to hire and fire personnel, and trade players. And, who knows what goes on in the executive suite of a highly visible professional sports team?

So, what does this story have to do with On Life and Love after 50? What might Magic’s comments mean to we Champs?

I don’t want to sound idealistic. However, we should try to not let a job, or a living situation, or adversity or whatever, lessen the meaning and happiness of our lives. We have x number of years left. We should pursue and enjoy what we love to the fullest. We must follow our passion as best we can. We must do our best to live in a way that makes us happy.

That’s what Magic just did; and that’s the message that I take away from his words.