He breadcrumbed Loretta. He was a miserable worm – regardless of how you want to label it and/or him

Today’s eNewsletter is a collection of 20 Champ responses from last week’s article, “Breadcrumbed. A new senior dating term. To refresh your memory, go back and read last week’s post about Loretta being breadcrumbed.

1. Jeanne, “Yikes! That wasn’t a boyfriend/girlfriend relationship! It was a one-way street – going his way.”

3. Art, Florida, “This ‘relationship’ was much more in her mind than his. He carried on his life with her as an occasional date.  When he did not give her so much as a birthday phone call, it was obvious that she was not on his mind, or even in his plans.

“This was for him just another in a line of dates, but no deep communication, no interest in the future, and no relationship.

“I think that many of us read more into situations, and believe the story we tell ourselves, but in the end, wind up being hurt.”

4. Joanie, “I was in two ‘go-no-place (GNP) relationships’ where there was no growth and no further depth than the initial dating. It took me years to realize what was happening.

“It’s a gift to find this out after a year or two and get out–better to be alone and pursuing a quality life–than to waste one’s precious time on a GNP. Loretta will find a better match.”

5. Miriam, “There were small signs along the way, but she was too trusting with his many excuses and times of not seeing her. In a good relationship, you want to be together as much as possible.”

6. Susan, “It sounds like Loretta’s now-ex boyfriend may be incapable of having a close relationship. There were red flags. For one, being brushed aside for a family dinner every week seems very unusual.”

7. Sue, Phoenix, AZ, “Loretta is much better off without that kind of individual. He’s more of a miserable worm than a crumb.”

8. Jon, Olympia, Washington, “Loretta’s friend should be ashamed of himself. A man should never make the woman guess the status of their relationship. Making and keeping plans is crucial to maintaining communication. For Turkey Day, I’m having dinner at Sharon’s with her family, and I am buying the turkey.”

9. Tasia, “Breadcrumbing – Never heard of it before but it makes total sense! I tried online dating for a few years and met only one person who was honest with me. Unfortunately, the attraction wasn’t there even though he was a good, kindhearted man. We even tried a second time to make it work a couple years later, but, everything that was wrong the first time, was still wrong, so we ended as friends again.

“I’m not online any longer and I have not been breadcrumbed, or, experienced situational dating, but I now recognize that happened with a former friend. I always thought it was because she slept with these guys after the first or second date – not saying Loretta did that – just that my friend did.”

10. Mary Lou, “Long periods between dates, showing up not groomed for a date, talking about making plans and then not following up, didn’t any of these raise a red flag?

“It takes two to make a relationship. This relationship was on its last legs, whether she knew it or not. I bet he met someone who lives closer to him, and, went for it with the other gal because Loretta was geographically undesirable.

“Some people just want to keep their options open (ie., breadcrumbed) until they decide where to commit. Not fair nor is it kind, but it’s what happens.

“Loretta sounds like a nice lady. She’ll be more savvy and aware with the next guy she meets.”

11. Marta from Montreal, “Six weeks is an awfully long time to not get together, especially since they were not very far apart.

“It sounds like the relationship was not developing as relationships do, but how was she to judge that? We are encouraged to be patient, kind, accepting, all that good stuff, but there is a limit, and I understand how deciding what one’s personal limit is can be very confusing.

“If what you want is a loving and permanent romance, be alert for signs it’s not going to happen, and get your runners on and get going.”

12. Gail, Bishop, California, “My reaction is old-fashioned: good riddance! What a rude person. I’m glad she found him out.”

13. Thyrza, Los Angeles area, “Loretta was hanging on too long hoping the relationship will develop and blossom. Obviously, it did not, time to move on.

“He was not a catch, anyway, I would dismiss it as a ghostly encounter. Move on Loretta. I don’t care what that relationship label is, just move on!”

15. Stella, “ARRRRGHGH!  Why would she want him anyway?  He’s mentally ill, in bad health, blood clots (unless he’s lying). If a guy isn’t willing to spend his time with you exclusively after a year – HE’S JUST NOT THAT INTO YOU!” (The name of a well-known dating book).”

16. Joy, “She thought this to be a loving, committed relationship. Men and women should pay more attention to what their partner does than what he or she says. Actions speak louder than words. Talk can be cheap. I believe most of us heard this ‘saying’ when we were in high school.

Loretta is a loving and kind woman. Love yourself more Loretta and be thankful you can now see his true character. Head up high and move forward with a smile. You’re lucky you caught him in another lie.

17. Terry, “I feel for her as ‘love’ can be like the disease of addiction–cunning and baffling.”

18. Lee Ann, “I’m not fond of labels since every dating experience is different. Breadcrumbed especially. I think what she needs to focus on instead of labeling it is what she wants next time. There were so many red flags. They were dating for a year but would go weeks without seeing each other, even though only 30 minutes apart.

“I’m also disturbed that she wasn’t included in Sunday dinners. Relationships are supposed to grow in a forward direction.

“Another huge red flag for me would be being asked to make a baby blanket for a baby I’d never met. I think she should take some time alone to examine what she wants in a relationship and perhaps see a therapist to learn how to set boundaries and to have a healthy relationship down the road.”

19. Shelley, San Diego, “I think what many women do is: Go by a man’s WORDS and not his ACTIONS. This man was saying he was her ‘boyfriend’ and that he ‘loved’ her, but his ACTIONS tell a different story.
“In all relationships, we need to feel safe, seen and celebrated.

“From a man who says he loves me, I should be getting great treatment, treated as precious.”

20. Stephanie, Midwest, “Breadcrumbing is nothing new. It used to be called ‘stringing you along.’

“Loretta’s boyfriend didn’t want to break off the relationship because his new lady he had dinner with might break up with him, and good old Loretta would still be available for dating.

“For a time, she was his main girlfriend, as he was inviting her to share the holidays with his family. Somewhere along the line, she became a utility infielder instead of a starting pitcher.

“Breadcrumbing is more subtle than ghosting, you feel the person still cares about you and there is an ongoing connection.

“Ladies, don’t fall for this–if enthusiasm wanes, if something has changed–call it out. Put less value on his words than his actions from that point on. Maybe he’s just a coward or fears hurting your feelings so he says all the right things and you calm down–but is the phone ringing again?”

Tom’s final observation: Wow 20 Champs’ responses. You make this eNewsletter so darn interesting. In effect, you write it.

The perfect finish to this eNewsletter was alluded to by Thyrza, when she mentioned Loretta was hanging on. Those two words reminded me of the incredible Rod Stewart song, “You Keep Me Hangin’ On,” from the 1977 Footloose and Fancy Free record album (we’ve featured it before in a column) 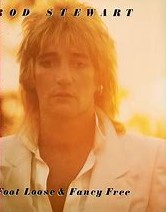 That song by Stewart is the greatest tribute to being breadcrumbed in the world. The violins, and, Carmine Appice on the drums, make listening to this 7+ minute song purely enjoyable.

That song, and two others from that album (I Was Only Joking and You Got A Nerve) belong in the senior Music Hall of Fame (which doesn’t exist). Here’s the link to You Keep Me Hanging On. Do yourself a favor and listen (excuse the picture with the video of the woman with the bikini and tattoos)