Why I don’t play Cupid for senior singles

Why I’ not a matchmaker

A woman Champ suggested this week that I add playing cupid to my job description.

Cheryl emailed, “Because you know a lot of single men and women, you would be a great person to introduce them. For me, it may not work because I live in L.A. County near LAX, about an hour’s drive from South Orange County. As you have previously mentioned, senior singles are not interested in driving long distances – especially at night.

“I’m not saying you should become a full-blown matchmaker – that would take a lot of work and responsibility. But there are other ways you could become a ‘go-between.’

“How about allowing your readers to sign up on an ‘eligible-list’ page on your http://www.findingloveafter50.com website, and perhaps have them include the general area where they live, their status (divorced, widowed, for example), and a photo?

An ‘eligible-list’ with a mini-profile of each person? While Cheryl’s intentions are honorable, she is in effect suggesting I become a matchmaker.

Cheryl added, “I’m sure there’s a great guy in my area who is looking for me!”

Cheryl, I know where there’s a single guy. But you’d have to travel to Dingle, Ireland to meet him
photo by Tom Blake

In 27 years of column writing, I’ve encountered hundreds of seniors who’ve found love, and thousands who haven’t. And I’ve tried to introduce some of them including widowers, widows, never-married and divorced people, particularly when they live within 25 miles of each other. Some have become couples, but in most cases, no match was made. I heard the words, “We just weren’t right for each other,” often.

Some people who had asked me to find them a mate were annoyed that I wasted their time, even though they were the ones who approached me in the first place. Older singles, who are set in their ways, can be very picky and hard to please. It’s often a no-win situation. For example:

A woman who asked me to introduce her said, “You didn’t tell me he drinks bourbon, gambles on football, talks too much, and snores.”

Another reason I won’t match-make is there are more single women seeking love at age 65 compared to men of the same age; the ratio of single women to single men is about four-to-one. At age 75, that ratio increases to approximately five-to-one.

A similar ratio would exist on an eligible list website page. Men who are out there wouldn’t post to it. And then I’d hear the all-too-familiar cry: “Where are the men?” Imagine, having an eligible page that listed only women? It’d be a flopper-rue of a page.

Would including an “eligible” page on my website as Cheryl suggests yield successful matchups? Perhaps a few, if men participated. However, the time, effort, and cost to create and update a list would be prohibitive.

Nearly every day during the pandemic, an email arrives in my inbox promoting new dating and/or matchmaking sites. One matchmaker included these words:

The same site said its workers do their best to find that person and introduce you.

“Do their best?” Wow, matchmakers who often charge between $700 and $25,000 are only as good as the clients they have in their dating pool.

Will I add a “fixer-upper” list to my website? No thanks. However, when I sense that two people might make a match–similar ages or the same city or similar interests–I will mention to each one about the other one. If they both agree, I will share an email address but I must have permission from both of them. I’ve done it many times through the years.

When the pandemic is under control, my partner Greta and I will resume the monthly senior singles meet and greet gatherings at Tutor and Spunky’s Deli in Dana Point. Many people met their mates there. But I didn’t fix them up. They did it themselves by being willing to get off their couches and out of their houses.

And with some of those successful couples, I was amazed when they got together. I wouldn’t have thought to introduce them, thinking their interests were too different. Hence, I would have been wrong.

So, Cheryl, Tom Blake will remain a columnist and leave the matchmaking to the dating sites and matchmakers. They are the so-called “pros” and the only thing they lack: single men.

Here’s the website link again. Tell me where on the site the page you suggest would go: http://www.findingloveafter50.com

A quick mention of thanks to so many of you who sent me your condolences regarding the death of my brother. I was surprised at the number of you who’ve had similar losses.

I’m a newspaper columnist and an eNewsletter writer. My usual topic: people age 50-plus seeking love. For 26 years, I’ve written about hundreds of seniors who’ve found love, and thousands who haven’t.

Knowing I have contact with so many older singles, people ask why I am not a senior matchmaker and why I don’t fix singles up. There’s an easy reason: it’s too darn hard and seldom works. The effort usually isn’t appreciated.

It’s not that I haven’t tried; I’ve done it dozens of times. I’ve known widowers from San Clemente, California (for example), and widows from San Clemente and have suggested they get together. Some have, but in most cases, no match was made. And then, the people get mad at me for wasting their time, even though my time was free. It’s a no-win situation. In a nutshell, that’s why I’m not a matchmaker.

Granted, some couples have met at our Meet and Greet get-togethers at Tutor and Spunky’s Deli, the Dana Point, California, restaurant I founded and owned for 25 years. But I didn’t fix those couples up. They did it themselves by getting off their couches and out of their homes and coming and socializing. 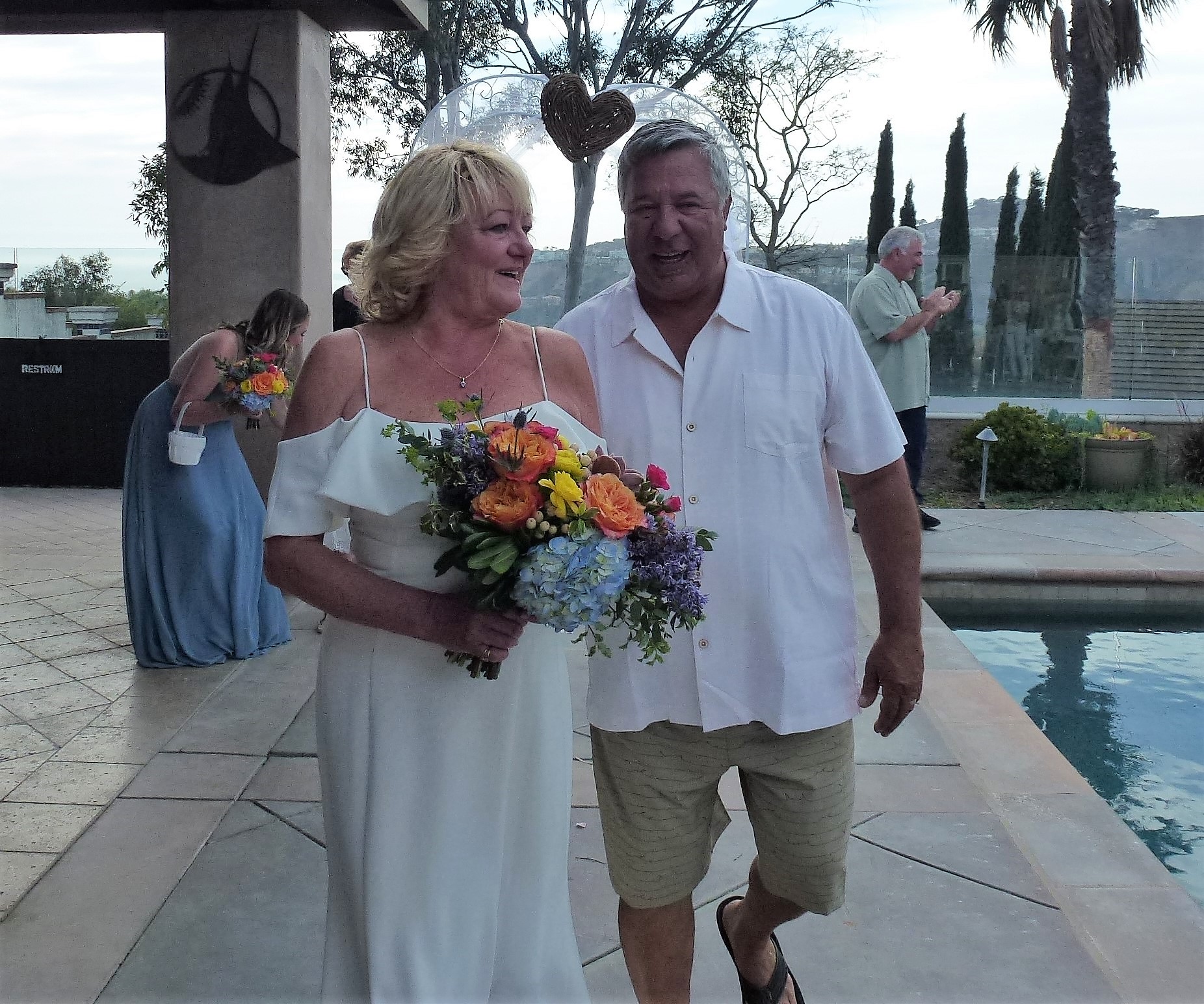 Technically, I did not introduce them. But, Carolyn and Alex Rentziperis met at our first Meet and Greet 3-4 years ago. And it led to a marriage. He’s been my barber for 25+ years. (Photo by Tom)

Many couples who met there are still together. But not all. Some of the relationships have lasted for a month or so, while others resulted in marriage.

Sponsoring events like that is challenging. Why? There are always more single women than men, especially as we age. Often, by five or six-to-one. I’ve watched women walk in the door, see a limited number of men, and turn around and walk out. Their loss. Sometimes men arrive late.

It takes time and effort to put those no-cost events on.

Last week, a Dana Point woman emailed: “Maybe you should have Meet and Greets more often so seniors have a place to go and socialize instead of staying home. I know you are busy so maybe you can have someone else take charge. Just a suggestion.”

She’s never attended one of our events; she has no clue what’s involved. My answer to her: “More often? It’s difficult enough having one per month, just trying to round up enough men to make it interesting. More often than that? No thanks.” She read that response and unsubscribed–must not have been what she wanted to hear.

Nearly every day, an email arrives in my inbox promoting new dating sites. This week, one arrived with the subject line: “An Easier Dating Site For Men Ages 50+.”

I usually ignore those emails, but, was curious so I clicked on it. It showed a picture of an attractive woman with this caption: “Local matchmaker has more older women & needs more men to match with female clients.”

The opening line read, “Meet Successful Dana Point Singles.” Turns out, it’s not an online dating site, but a matchmaking site, the kind where you pay a professional matchmaker to find dates for you.

The site stated, “Professional Matchmakers work with you to determine the exact type of man or woman that would be best for you, and then do their best to find that person and introduce you.”

“Do their best?” Wow, matchmakers are only as good as the people they have in their stables. Let me tell you, they are aware of the lack of men. I have had many of them contact me saying they were having an introductory cocktail party, and did I know of any men they could invite? No joke, it’s true.

It’s Just Lunch is a matchmaking service and on occasion has contacted me asking for the names of men. I decline, of course.

The ballpark cost for hiring a matchmaker? The article stated between $675 to $25,000. At those prices, maybe I should become a matchmaker. Or, at least a paid fixer-upper.

The site also stated: “Matchmaking is by its nature, a local endeavor. That means local offices staffed by warm, experienced, real people – not algorithms.”

Maybe the office is in Dana Point, or San Clemente, or San Juan Capistrano, the cities near me, but if so, I’m unaware of it. Avoid professional matchmakers. Read the online reviews; they are frightening. People feel ripped off.

So, I’ll remain a columnist, and your weekly eNewsletter provider, and leave the matchmaking to – well, the professional matchmakers, wherever and whomever they are.