Pago Pago (pronounced “Pango, Pango,”), the capital of American Samoa, was the last port of call, except for Hawaii, on this 82-day Asia and Pacific cruise that my partner Greta and I have been on.

Although not a state, American Samoa is a United States territory, that closely identifies with the USA. The currency is American; the primary language is English, and there is a McDonald’s near the pier where our Holland America ship, the ms Amsterdam, docked.

The country is made up of five islands and has a population of 180,000 people.

American Samoa was an important military base for the USA in World War II. It was attacked once when a Japanese submarine slipped into its harbor. The country has the highest rate of enlistment in the United States military services of any state or territory.

There are 30 Samoans in the National Football League. The two best known were Jr. Seau and Troy Polamalu.

As we sailed in, you couldn’t help but notice how green the vegetation is. The islands get lots of rain. It’s a beautiful place.

Located on the earthquake-prone Pacific Ring of Fire, American Samoa suffered a terrible tsunami after a major earthquake in 2009.

In visiting Pago Pago, Greta and I had a goal. One of our Champs, Mark Flannery–who lives in Orange County, but whom we’ve never met–mentioned in an email that in 1975, his father was buried in the Satala Naval Cemetery in Pago Pago. Mark has never been to American Samoa.

I said to Greta, “Let’s try to find the cemetery where Mark’s father is buried.”

When I mentioned that to Mark, and asked for more information, he wrote, “My father, George Flannery retired from the Air Force around 1970 and shortly thereafter took a job with the government of American Samoa. He died of lung cancer. My mother stayed on the island for about five more years before returning to the mainland.”

Mark added, “I certainly wasn’t asking you to look for my father’s grave, but while you are there, I have a small request. Will you see if there is any sign of my mother Ellen in the same place? She died in Texas about 25 years ago, and her ashes were sent to a friend in Pago Pago, who promised to put her near my father. You are the first people I know who have traveled to Pago Pago since then and therefore able to check this for me and my siblings.”

I said, “I know you didn’t ask, but Greta and I would like to do this for you. And it will give us a goal to achieve on our day ashore in Pago Pago.”

Mark was aware that our visit to the Satala Cemetery might not happen. Our port visit to Apia, Samoa, the day before, had been cancelled for safety reasons by the ship’s captain because of a dangerous swell pushing the ship against the pier.

Pago Pago Harbor is more protected from wave surges than Apia Harbor and it was smooth sailing into the pier where the ship docked. I was excited that Greta and I would at least be able to go ashore and search for the cemetery.

At breakfast in the dining room, I saw an American Samoan official who had just come aboard. I asked if he knew where the Satala Cemetery was located. He seemed pleased that we had an interest in it. He walked me over to the window and said, “You see that red transmission antenna across the Harbor?”

“The cemetery is adjacent to it on the left.”

I recognized it from the pictures Mark had sent. My feeling was: oh my gosh, this is going to happen.

“How would you suggest we get there?” I asked the official.

“Walk out the gate and to the curb where the local buses pull in. Get on one in that direction, tell the driver to stop at the cemetery. You pay $1 each when you get off the bus.”

And that’s what we did. The bus driver had a bunch of white gardenias on the bus’s dashboard. He handed one to Greta. We were at the cemetery in five minutes. We paid the driver two bucks. 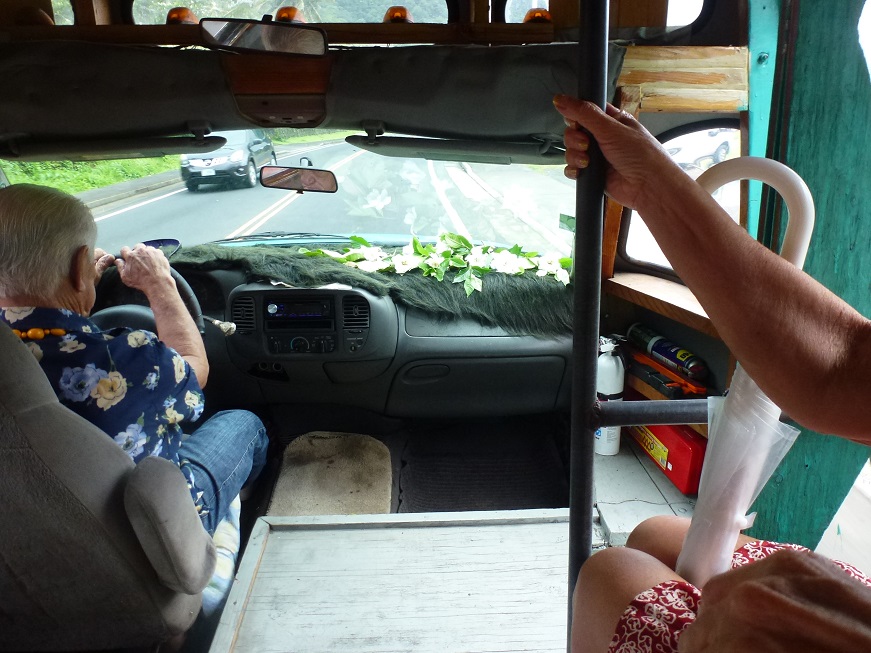 Inside our bus on the way to the Satala Cementery in Pago Pago. Notice the flowers on the dash

We found the markers immediately. Greta placed the flower on George’s marker. I went into the adjacent jungle and picked a tropical red flower for Ellen’s marker. 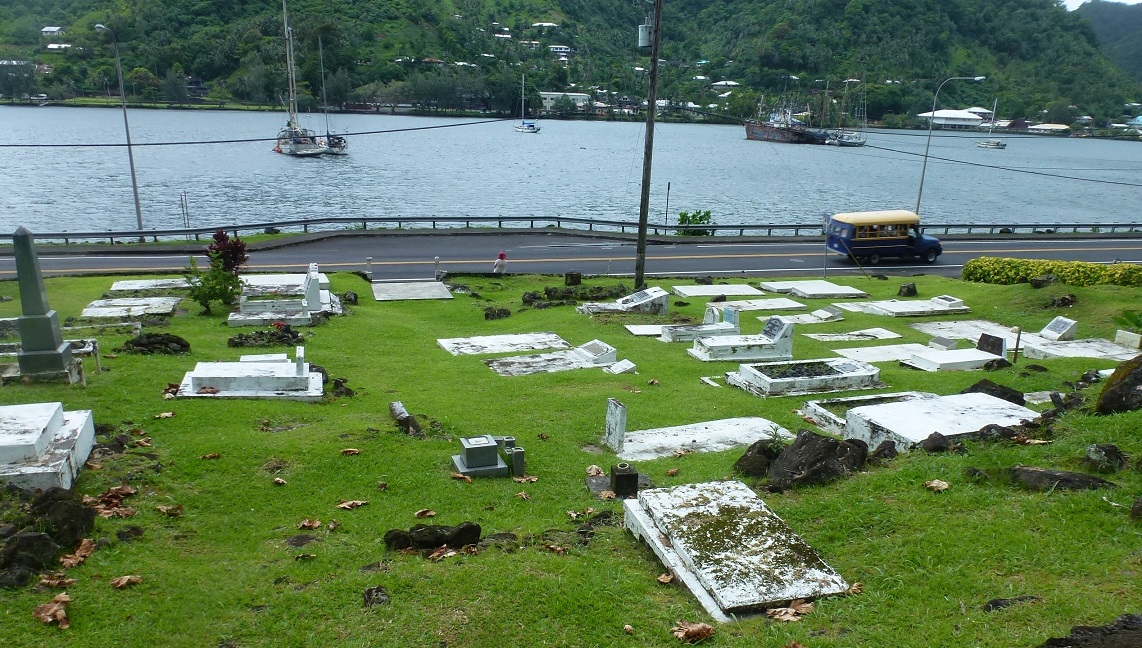 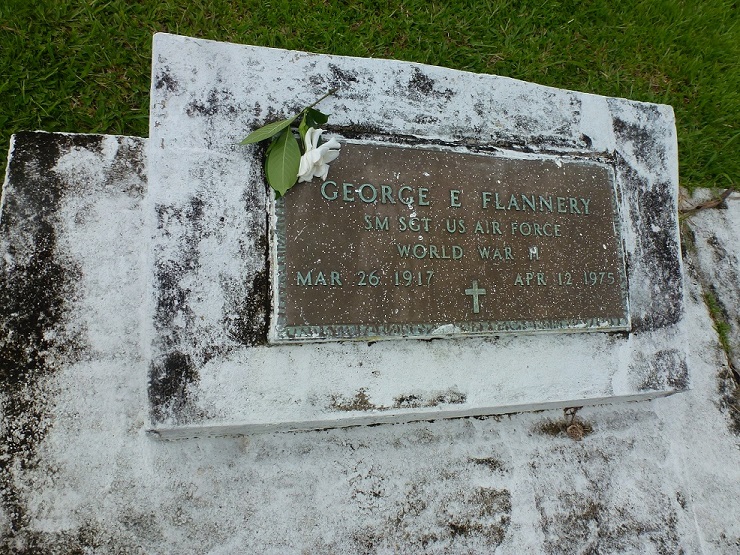 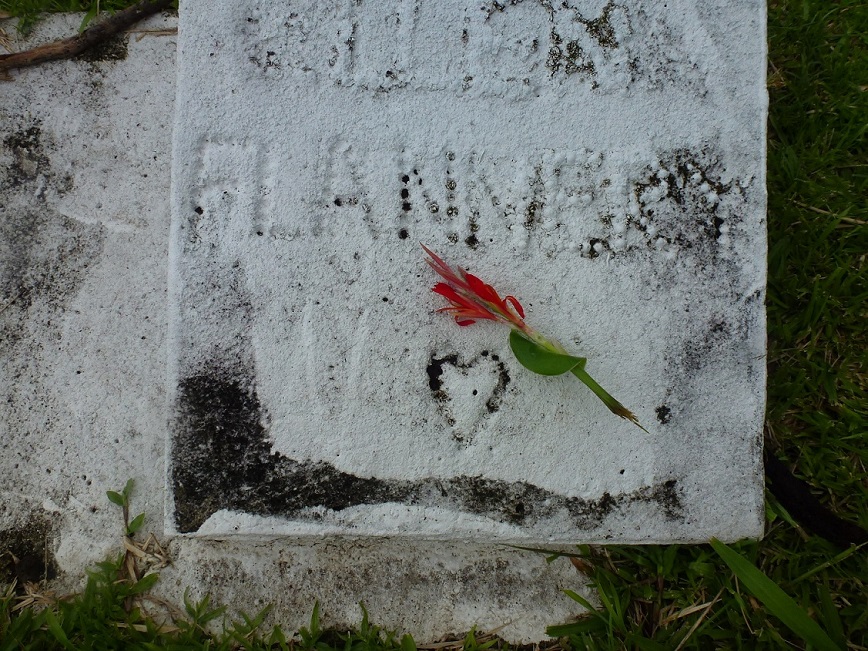 Ellen Flannery’s grave with red flower, located next to her husband’s grave

Greta and I spent an hour there taking pictures. Our mission was complete. Except, of course, to email the photos to Mark when we got back to the ship.

We enjoyed the bus ride so much, we got on the next bus to see more of the island. And the bus happened to be the same one as before, with the same nice driver. What a delightful and informative way to see the island. Locals who were on the bus asked us where we were from. They were so friendly and proud of their country, being a territory of the USA.

Later, we took a different bus in the opposite direction from the ship, to see the other side of the island. Our total bus fare for the day, $10.

Mark expressed his appreciation for the effort Greta and I had made and for the eight photos I emailed to him.

The next day, I emailed two more photos—to Mark–I thought. But, in my haste, I wrote, “George, here are a couple more photos.”

Mark replied lightheartedly, “George isn’t able to receive the photos you sent. But I got all of them, and, have forwarded them to my relatives. Thanks again.”

I was horrified at the mistaken salutation. But, Mark made me feel better. He said, “I had a good laugh about this.”

At lunch the next day, our table mates asked how we had enjoyed our day in Pago Pago. When we told them about our mission to visit the cemetery, they said, “When we rode past the cemetery in our bus, we noticed tourists taking pictures of a gravestone and wondered what that was about. My gosh, it was you two, and now we know why you were there.”

Greta and I will never forget our day in Pago Pago, American Samoa. It had special meaning for us.

Note from Tom: Our trip ends Friday, December 21, when we dock in Los Angeles. So, this may be the last newsletter about the cruise (maybe a few trip tidbits and summary will be included next week).

Some Champs have asked for more details. I added the trip’s blog posts to www.travelafter55.com. The home page will open on the most recent post and you can click on the archives in the right-hand column for December, November, October and September posts, which are all about this trip.

But one travel tip learned in Pago Pago I will mention here. A great way to see a city is to board a local bus and ride it to the end of the line and then ride it back. You see countryside that organized excursions don’t always see, and you meet and get to talk to the locals. Plus, the cost is minimal; the experience priceless.

Back in California, Greta and I met with Mark Flannery and his significant other, Donna, for dinner and to talk about Pago Pago American Samoa.