On Life and Love after 50 eNewsletter – January 4, 2019
by Columnist Tom Blake
Our Incredible Men Champs
For our first “On Life and Love After 50” e-Newsletter of 2019, we feature five of our men Champs.
David Southworth lives five miles north of Clare, Michigan, has been a Champ for more than 10 years. He emailed:

“For me, this Christmas was the best Christmas in 17 years. However, one of my Christmas gifts was delivered by my new Internal doctor and I quote, “The results of your blood test tells me you have Chronic Lymphocytic Leukemia (CLL), albeit minor, early stages. CLL usually grows slowly…you should outgrow it.

“I advised the doctor I had been planning to live to 103. God and I have taken charge.

“In October, I started story boarding a book I have wanted to write for several years, tied into my book, “A Lifetime In Seven Years.” The title of my new book is “A Journey To Me.”

“Now I have several new chapters to write for my book.

“I cherish our friendship and your endless counsel. Let’s make 2019 the best year possible.”

Tom’s Comment: I asked David for permission to use his very personal information. He responded:

“I talked with my children, several grandchildren and, my significant lady. They all agreed if it would provide a more meaningful impact to use my name, we all agreed the information and subject of CLL is so important.

“If it helps just one ‘On Love and Love after 50’ eNewsletter Champ, it would be OK to provide the CLL process, progress, and treatment status.

“I met Marjorie through friends. She is 70 years old, widowed with 4 children, lots of grandchildren. She is a thoughtful, giving, loving woman. She is an antique nut like me. She is always happy and laughing.”

Note from Tom: Dave’s poem, The Sands of Time, is on the Finding Love After 50 website:

Jackson, Michigan. He graduated two years ahead of me, in my brother’s class. I didn’t know him well, other than he was a heck of a golfer. Later, he won a varsity letter at UM for golf. He is one of the most avid University of Michigan sports fans on earth.

Here is a photo of Tom, Larry and Greta at a Michigan tailgate party in 2017. 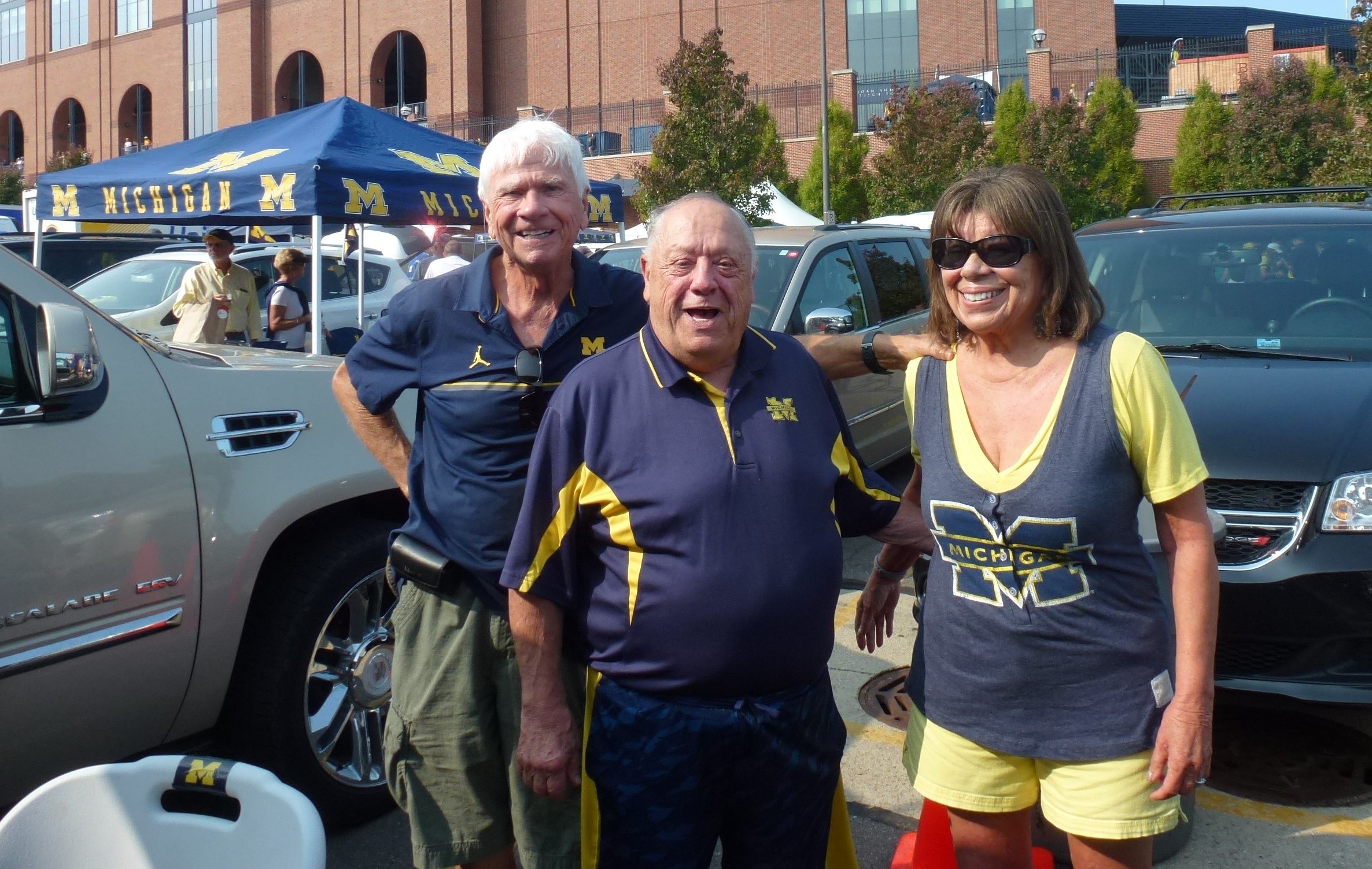 Tom, Larry Leach, and Greta at a UM tailgate party before Air Force Academy game in 2017

Larry emailed: “My hat is off to Champs, Chris and Tina, whom you mentioned last week, for their trip to Africa. With love all things are possible.

“I have three friends who are about 94.  One goes to UM basketball and football games and acts like an 18-year-old.  Another has been to Paris, Las Vegas, Chicago and much more this year. The third is a real live-wire now in Scottsdale, Arizona.  If they can do it, the two champs (Chris and Tina) you mentioned have many more trips in store for them.

“Congratulations to them and to you for your super thinking that goes into your weekly newsletter. I know it is Friday morning when I see an email from Tom Blake.”

You will recall that three weeks ago Greta and I visited Mark’s parents’ grave sites in Pago Pago, American Samoa. He had never been to the cemetery, and I had only met Mark and Donna, his significant other, once in Tutor and Spunky’s deli years ago.

On New Year’s Eve. Mark and Donna, came to Dana Point and spent time with Greta and me. They met on Match.com. Donna still teaches. 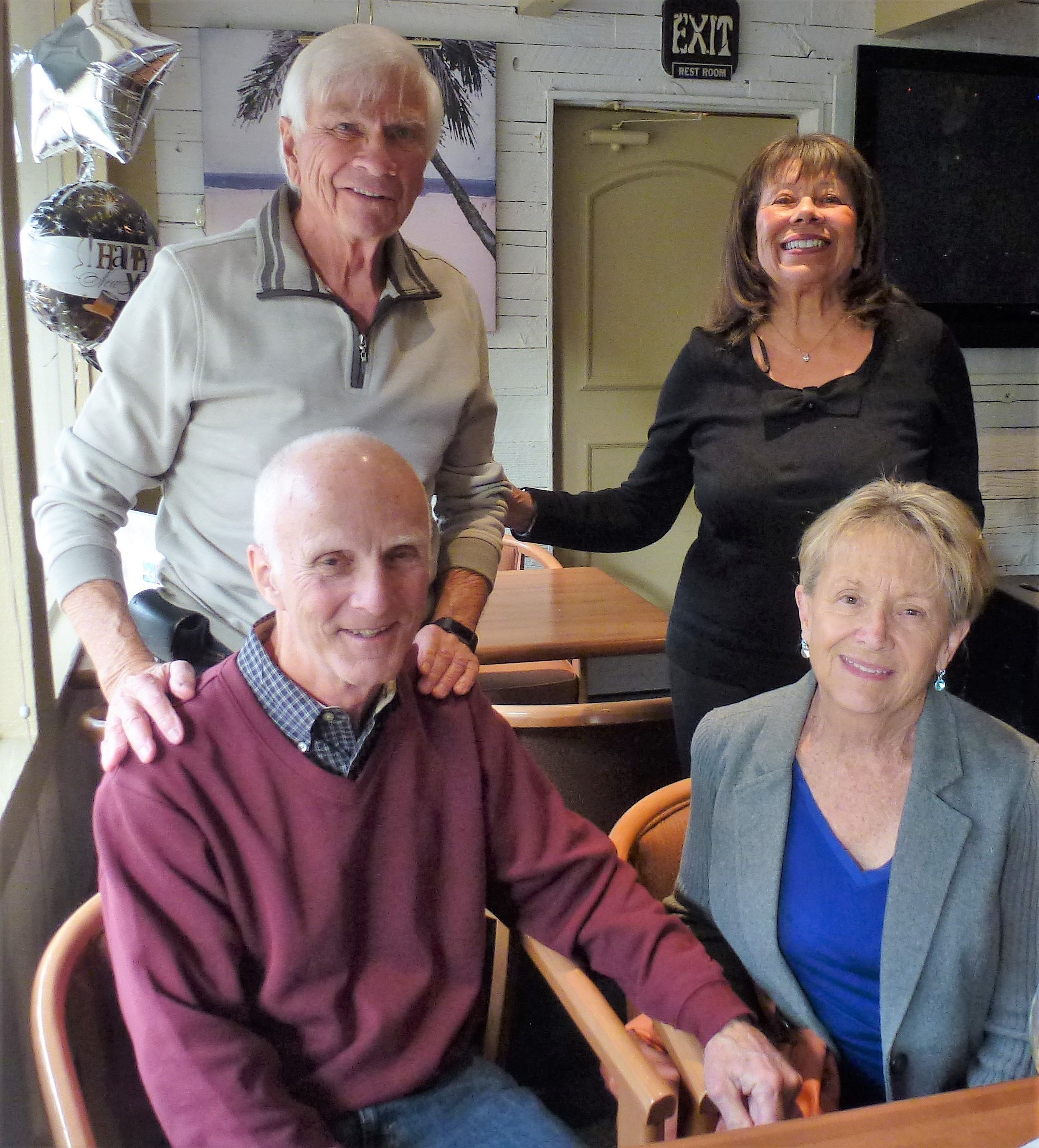 Front: Mark and Donna. Back: Tom and Greta at Harpoon Henry’s in Dana Point on New Year’s Eve

There was one other aspect of our American Samoa story that I hadn’t shared with Mark. When Greta and I arrived at the grave sites, there was a lava rock perched on his father’s grave. I carried it back from Pago Pago and gave it to him Monday.

Note from Tom: Ted and I graduated from Jackson High School, Jackson, Michigan, in the class of 1957. At our 2017 class reunion, we got to chat face-to-face at dinner.

“My Christmas Eve was cold and snowy in 1960. It was a Saturday evening, and I was working at the local radio station in Albion, Michigan, reading top-of-the-hour newscasts and running the control board for Late Date, a popular weekly radio show targeting teenage listeners.

“The program ran from 10 p.m. until Midnight. The show’s host—a senior at the high school in nearby Marshall named Marcia, chose to close her program that Christmas Eve with a bit of verse. It didn’t rise to the dignity of a ‘poem,’ but it expressed in rhyme an important idea, in simple, homespun language appropriate to the time and place.

“I heard the first line or two through my headset, and then for a reason that I have forgotten (if I ever knew), I turned to look at the host through the glass that separated the control room from the studio where she sat. I discovered, to my surprise, that she was not reading the verse, but reciting it from memory, and she was speaking directly to me through that glass.

“Here is her Christmas wish to me that long-ago evening:

If I could do whate’er I want to do,
To make complete your gladsome Christmas Day,
I would not bring a single thing to you,
But I would come and take some things away:
I’d take away all trouble from your heart,
Each pain and sorrow I would have relieved;
And every pain that caused a single smart,
And every hour through which you sorely grieved.
I’d have them all be gone — forever gone —
Forgotten, like the things that cannot be;
And then each hour would be a joyful one,
For only good things would be left you see.
“Eight months later, the host and I were married, and the rest (59 years) is history. Merry Christmas!”Note from Tom: Ted and Marcia wanted Champs to know that her words to Ted on Christmas Eve 1960 were not written by her. She had seen them and memorized them. Research by them has not revealed the original writer. So, we have to say anonymous. This fact does not lessen the beauty of that moment when Marcia spoke to him through the glass at an Albion, Michigan, radio station in 1960.

John Johnson – Hagerstown, Maryland (80 miles northwest of Washington, D.C.). John commutes about an hour toward Baltimore and works for Northrop Grumman; he has been a Champ for longer than I can remember and has contributed often to newsletters.

On December 23, John posted a wonderful message on the Finding Love After 50 Facebook page. It is too long to include in the newsletter, but the topic is: dragging old baggage into a new, fresh relationship. His words demonstrate that the men in our group are very introspective, warm and giving.

His wrap-up words: “How 2019 plays out is up to you and this is a chance for a new transition within you even when everything else remains the same. Make it a good one and start with an inner smile that flows to your lips to share with others.”

Happy New Year. I feel blessed to have you all as friends.