A stress-free wedding (sort of)

On Saturday, Oct 10, Greta and I left our Dana Point (California) home at 3:15 p.m. to drive to the Fallbrook home of Tina and Tod, Greta’s daughter and son-in-law’s residence. Greta’s granddaughter, Cierra, was getting married. We allowed an extra 45 minutes to get there. The ceremony would begin shortly after 5 p.m. in the backyard.

Our route was to travel south on Interstate 5, through the Camp Pendleton Marine Corps Base to highway 76, upon which we would head east for about 25 miles to the intersection with Interstate 15. Then we would head north on the 15 for about four miles, before turning to the west for three more miles into the scenic hills of Fallbrook. The trip normally took an hour.

While driving south on the 5, we were listening to traffic updates on KNX radio. An update stated that the northbound four-mile stretch on Highway 15 near the end of our route was at a dead stop. I was unaware of any alternate routes. My mind started racing.  “What if we can’t make the wedding on time?”

And I knew Greta had heard that newsflash and I could feel her looking at me, probably thinking, “What’s your plan?”

Then, the southbound traffic on the I-5 slowed to a crawl. Oh, oh, time to really worry about being late. We were already 45 minutes behind schedule when we turned onto the 76.

KNX traffic updates about the I-15 stopped. Was it still stop-and-go? We just couldn’t be late for Greta’s granddaughter’s wedding.

So, I chose plan B by turning onto Pala Road, an unfamiliar backroad in the direction of the Fallbrook home. Two narrow lanes, curvy through the woods. It was crunch time, nervous time for about five miles. It was one of those no-conversation stretches in the car except for Greta asking, “Do you know where you’re going?”

“Of course not; I’ve never been on Pala Road in my life,” I mumbled, along with an expletive or two. Shouldn’t the grandmother of the bride be the nervous one, not the driver?

Thank heavens for GPS. Had I not had my phone, I wouldn’t have chanced plan B. When we pulled into Tod and Tina’s driveway at 5:01 p.m., I was a stressed but relieved and happy dude.

The wedding had been planned for June with 130 people on the original invite list. Due to the pandemic, the wedding was delayed and the invite list pared down to 14 people.

The officiant was Marc, a friend of Chad, Cierra’s brother. Marc was perfect. He smiled a lot, and you could hear him saying to the couple, “Turn right, turn left, join hands,” that sort of thing. The couple wrote their own ceremony, which included several ribbons being tied loosely around their wrists by Marc, each ribbon representing a vow. 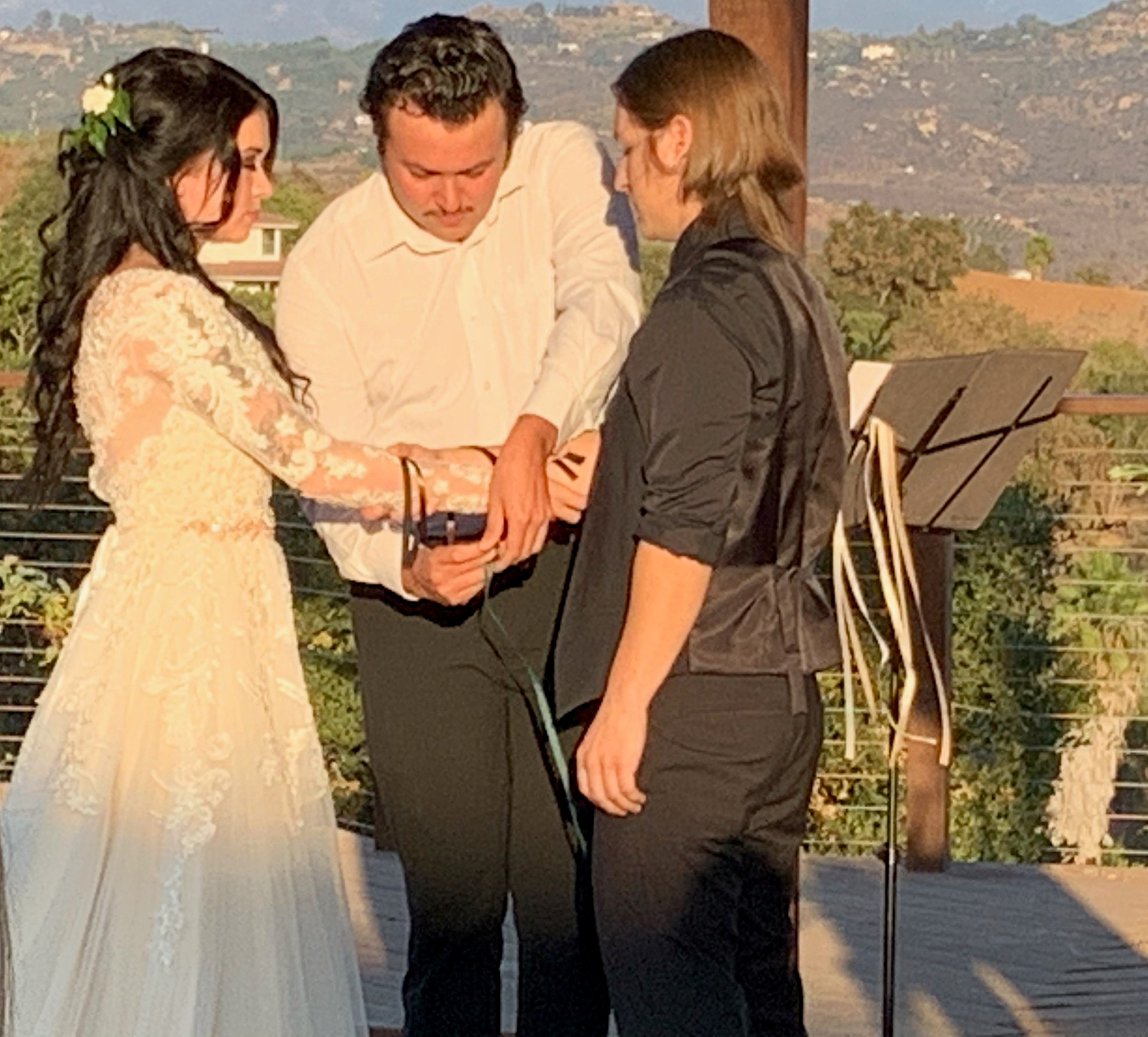 Officiant Mark wrapping the vow ribbons around the wrists

Then, the couple pulled on separate ends of the ribbons. The result: presto, a perfect knot. Very clever.

Besides Cierra and Jeremy, Nya the ring bearer was the coolest aspect of the ceremony. Nya is the couple’s Alaskan Husky. That’s right, a dog with one blue eye and one brown eye. Below are Jeremy and Tina tying the wedding rings to Nya’s collar, 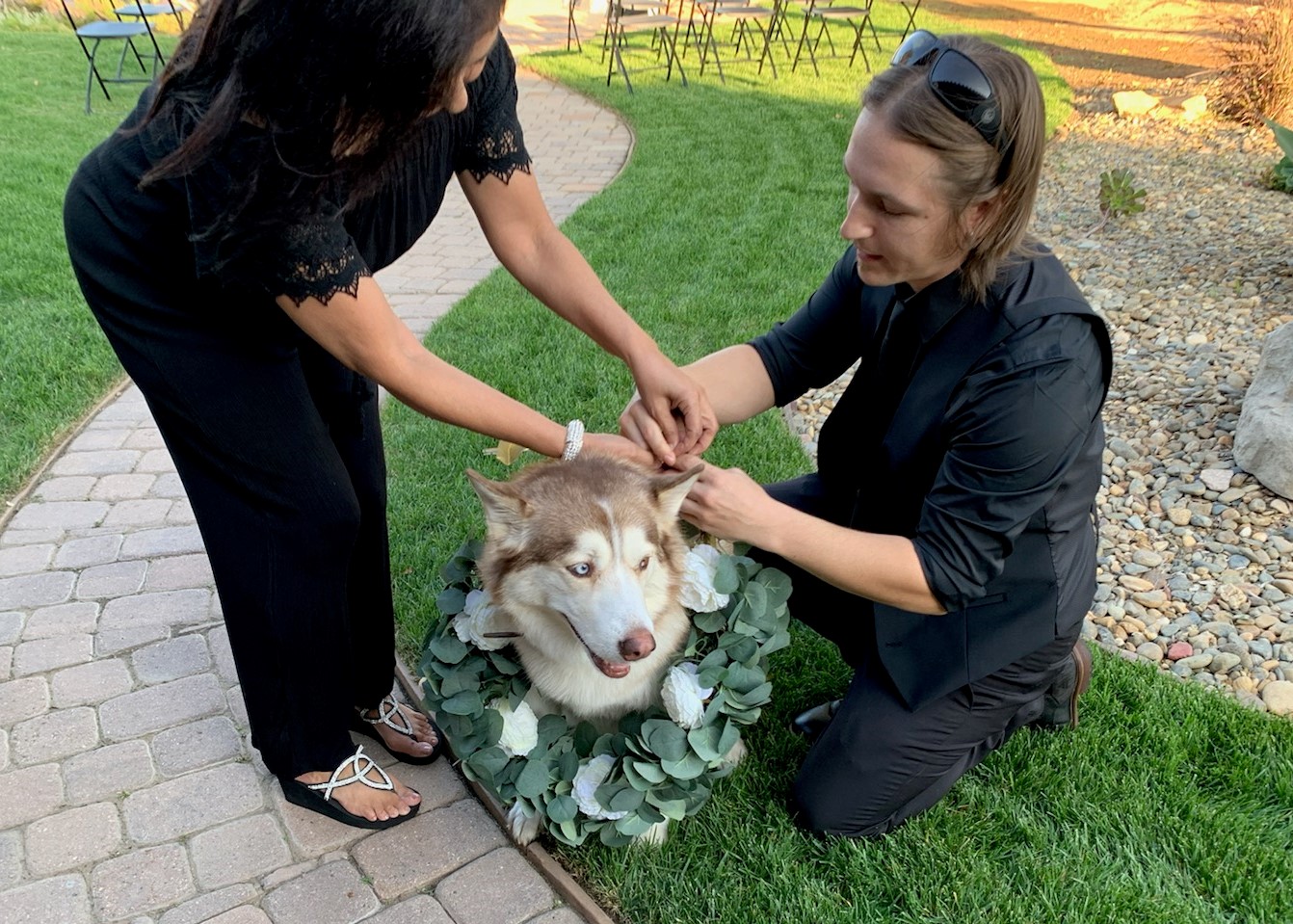 Nya getting “ringed up” before the ceremony

And when it was time, Nya was summoned to the altar, Jeremy knelt down and removed the rings. 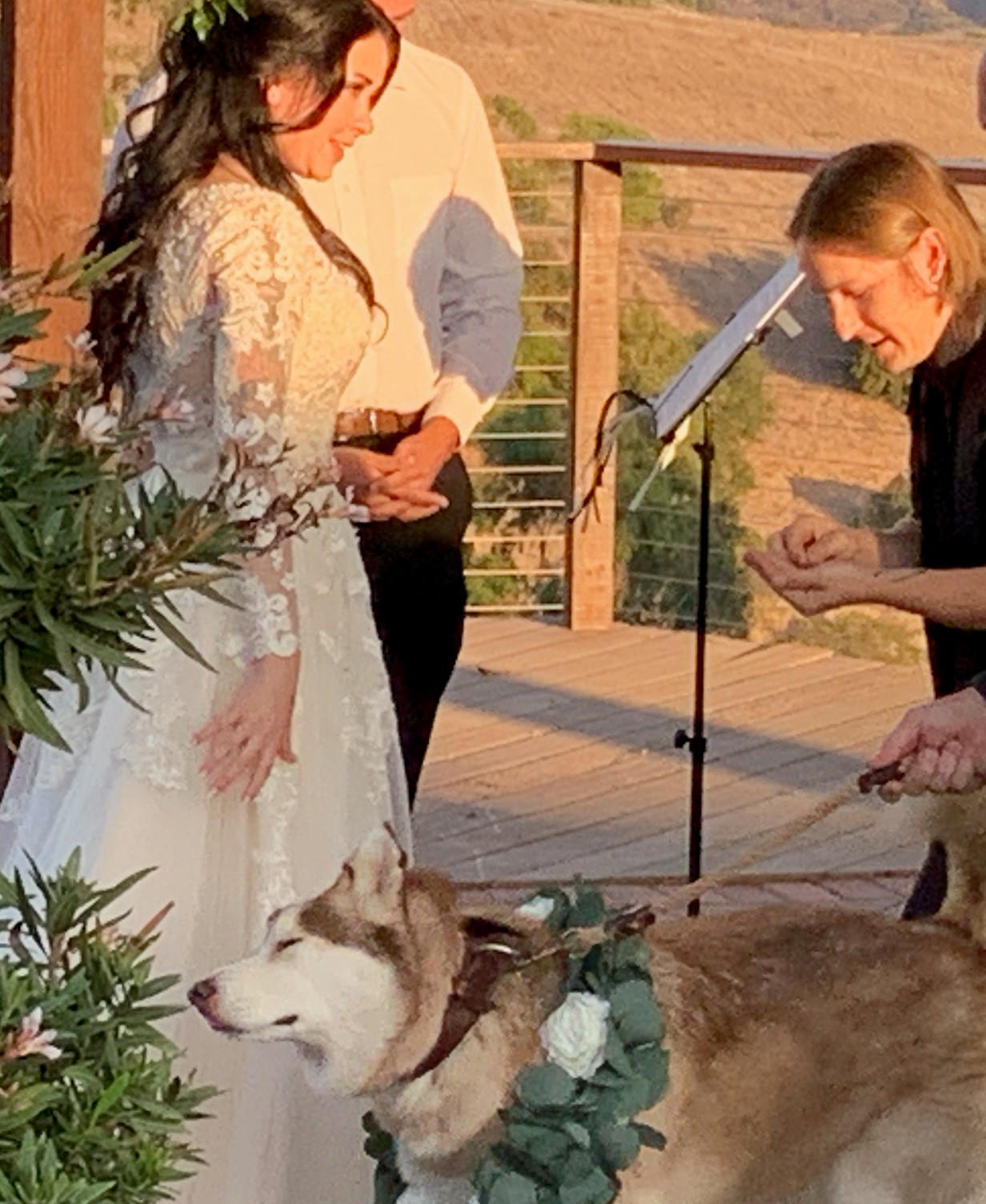 Nya seemed bored; her eyes were closed at the altar

All of the women in attendance received a white rose. Here is Greta, holding her rose with her face shield on. 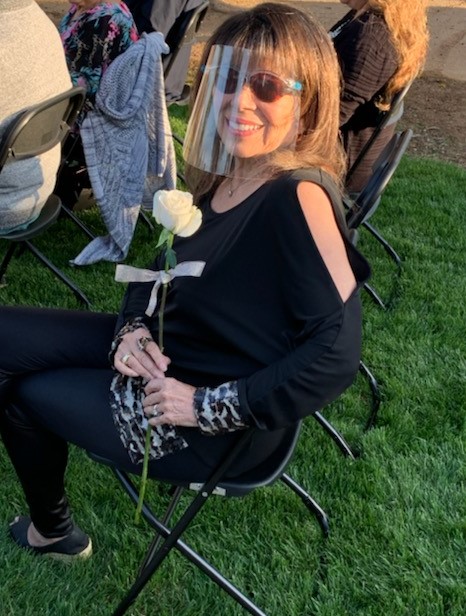 After the ceremony, Nya was eyeing an appetizer in Greta’s hand, he had a look on his face that seemed to say, “Don’t I at least get at a treat for being the ring bearer?” Gorgeous dog. 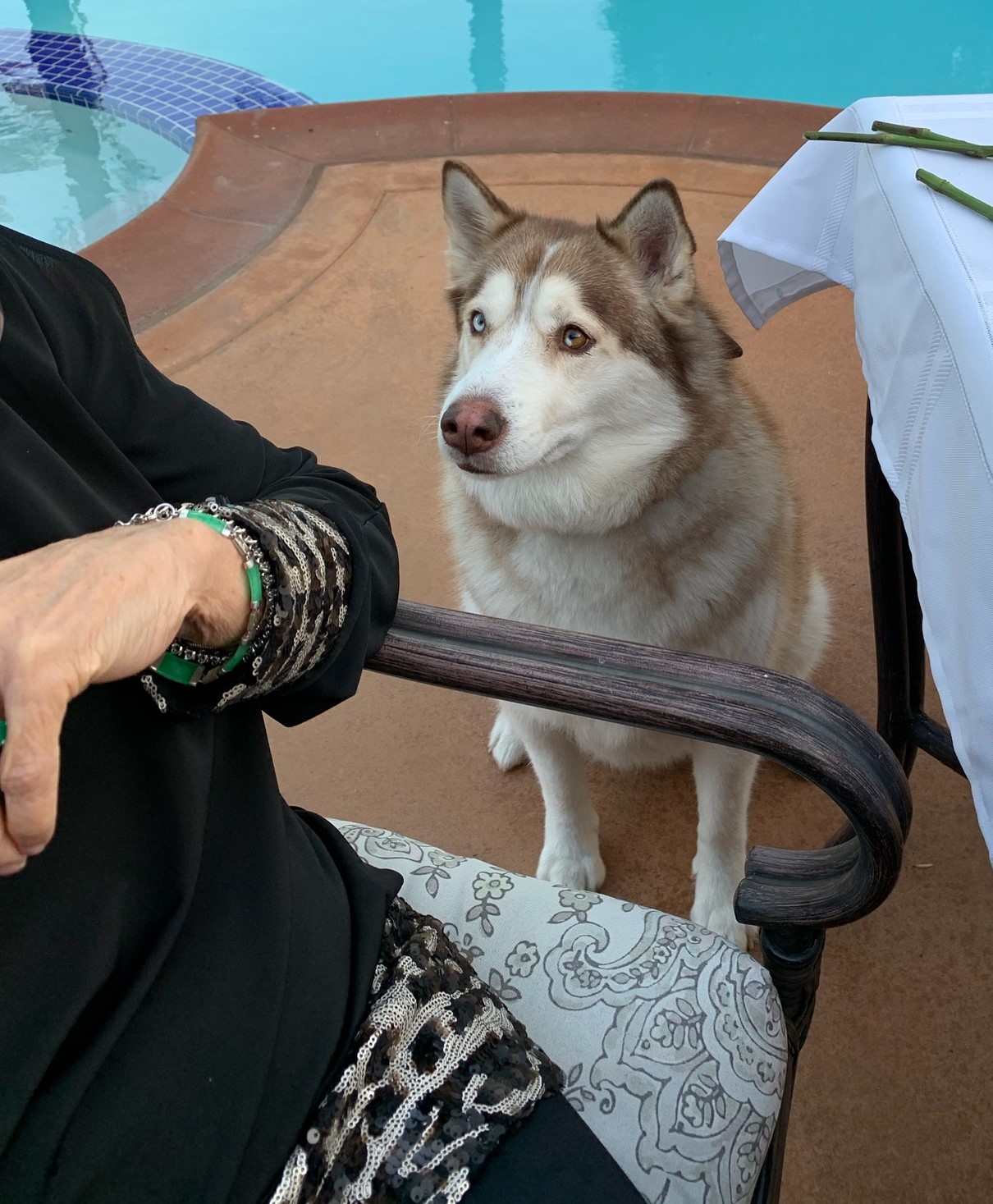 Don’t I get a nibble?

The father of the bride, Tod, made appropriate toasts at the dinner table, which was located outside with an incredible view of the hills and avocado groves in the distance. The 14 guests were served dinner and then the cake was cut.

At about 8:30 p.m., Greta and I headed out, arriving at home in an hour, enjoying a much-less-stressful trip back; It had been the nicest day of 2020 for us.