There are three parts to today’s eNewsletter

I call it “Dry Your Eyes” and “Senior dating topics”

Part One – Someone tell me why people who send long emails don’t respond when I answer?

As a journalist, I admit, I’m sometimes baffled. Here’s why:

An email arrives in my inbox. It could be from a Champ, but not necessarily. It could be from someone who isn’t on our eNewsletter mailing list. Perhaps, she or he did a Google search about relationships and my Finding Love After 50 website popped up. Through the website, the sender contacted me.

If the topic pertains to what I write about in this eNewsletter—relationships, dating most likely, or relevant senior issues–I’m all ears. Because I’ve done this drill for 25 years, I can generally tell in a sentence or two if the material has column potential.

The email is often long: one, two, or three full pages–1,000 or even 2,000 words. It likely took an hour, probably more, to write. Sometimes, more often than not, there are no paragraph breaks. So, I separate the material into paragraphs. The email usually ends with the sender asking for advice or comments.

As a courtesy, I attempt to respond immediately, simply to let the sender know I received the email and that I will reply in detail when I have time.

Later, after I’ve had a chance to assimilate and perhaps dissect what was written, I will respond with questions or comments to clarify any confusion with what’s written. If I feel the information is column-worthy, I will ask for permission to publish what was sent, even though at this point I’m not sure I will use it.

By column-worthy, I mean, information that Champs will find interesting, entertaining, or helpful.

I don’t charge for my time. I figure my payment is being able to use the information that was sent to me. In that way, these weekly eNewsletters can always be fresh. New information flows in. It’s a system I’ve used for years and it works.

But here’s what baffles me.

Often, not always, even though I’ve responded, I hear nothing more from the sender. Why did the sender put his or her valuable time into writing me, and then not follow up?

Was she just venting to make herself feel better? Did she figure out the answers on her own? Did she get sick, or, heaven forbid, pass away?

When I hear nothing more, I assume that I’ve received permission to use the information, since the sender asked for my comments, but I change the name so the chances of the person being identified are remote.

Such was the case last week with Judy, age 78, the woman who was never married. She was the one conflicted about moving to the boonies to be with her boyfriend of two years. She felt she and he were too different. Her email was around 1,000 words. Not a peep back from her after I responded to her twice.

And I checked Mail Chimp, the email marketing platform that I use to publish the eNewsletters, which shows who opened each eNewsletter, and who didn’t. She didn’t even bother to open last Friday’s eNewsletter, the one that exclusively featured her story and the sage advice tailored to her situation.

Someone please tell me why this happens.

Part 2 – Neil Diamond Broadway Musical (I hope he includes the song, “Dry Your Eyes”
It was announced this week that a Broadway musical about the life and music of Neil Diamond is being written by New Zealander, three-time Academy Award nominee, Anthony McCarten. He is best known for writing the smash movie musical “Bohemian Rhapsody.”

I think most of you are aware how much I love Diamond’s song, “Dry Your Eyes.” I tried to suggest to McCarten on Facebook that he include that song in the musical. Couldn’t find a good Facebook page for him.

But, I saw that Neil Diamond posted on his own Facebook page a response to the announcement news of the upcoming musical production. Diamond wrote, “So good, so good.” And most of us know that is from Diamond’s song, “Sweet Caroline,” where the audience, all together, chants out those words.

I provided the link to my YouTube video of him singing that song two weeks ago. And included it at the column end again today.

I realize that most of our Champs can’t attend the monthly Meet and Greets at Tutor and Spunky’s Deli in Dana Point. It’s just not geographically feasible. But, that doesn’t mean they can’t get out and about and interact socially with people near where they live across the USA and Canada, and in a few other countries.

It’s important to socialize. You never know what might happen; you might meet someone new. The perfect example was last week in Dana Point. When I first saw Jim and Beverly at the May Meet and Greet, Jim (in the red shirt with his back to the photo) was seated at a table with his buddy. Beverly was seated at a table with four other women (to the left of Jim’s table). The chances of them meeting seemed remote to me–they weren’t mingling. 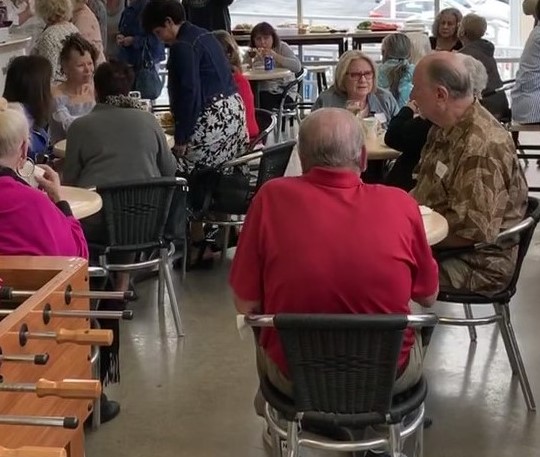 Apparently, Beverly didn’t find this “women-only-at-one-table and men-only-at-another table” arrangement acceptable. She took the initiative to be assertive by moving to Jim’s table and introduced herself. And guess what? A month later at the June Meet and Greet, they attended together. Might it become a relationship? Who knows? But, new friends were made. 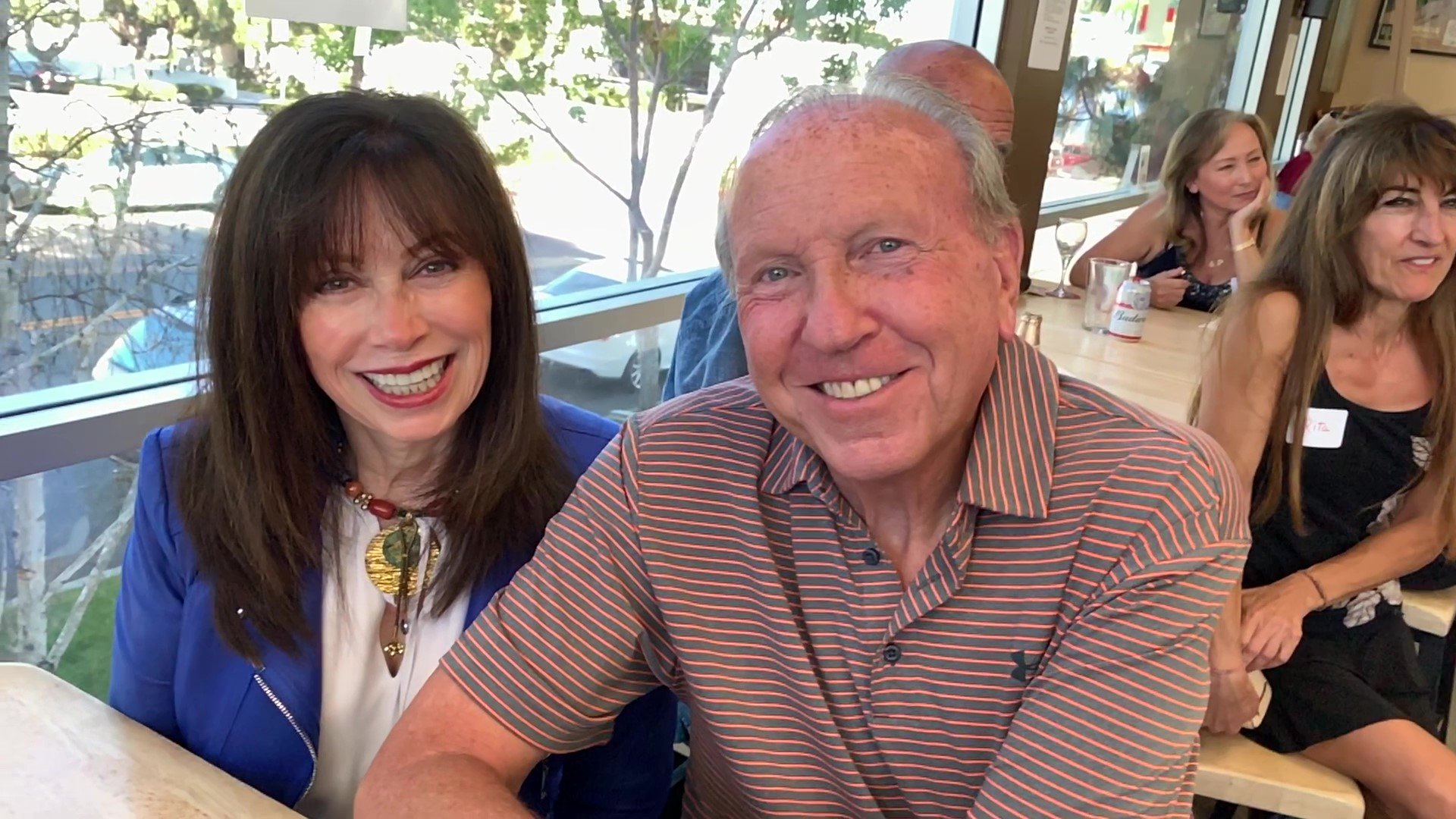 Beverly and Jim: What a difference a month makes (photo by Tom Blake)

This would never have happened if they hadn’t gotten off the couch and out of the house. Goes to show…if it can happen in little old Dana Point, it can happen anywhere else where singles find themselves.

Another example of making it happen were Don and Edie. They attended. They met on Match.com in May, 2018. Handsome couple, don’t you think? 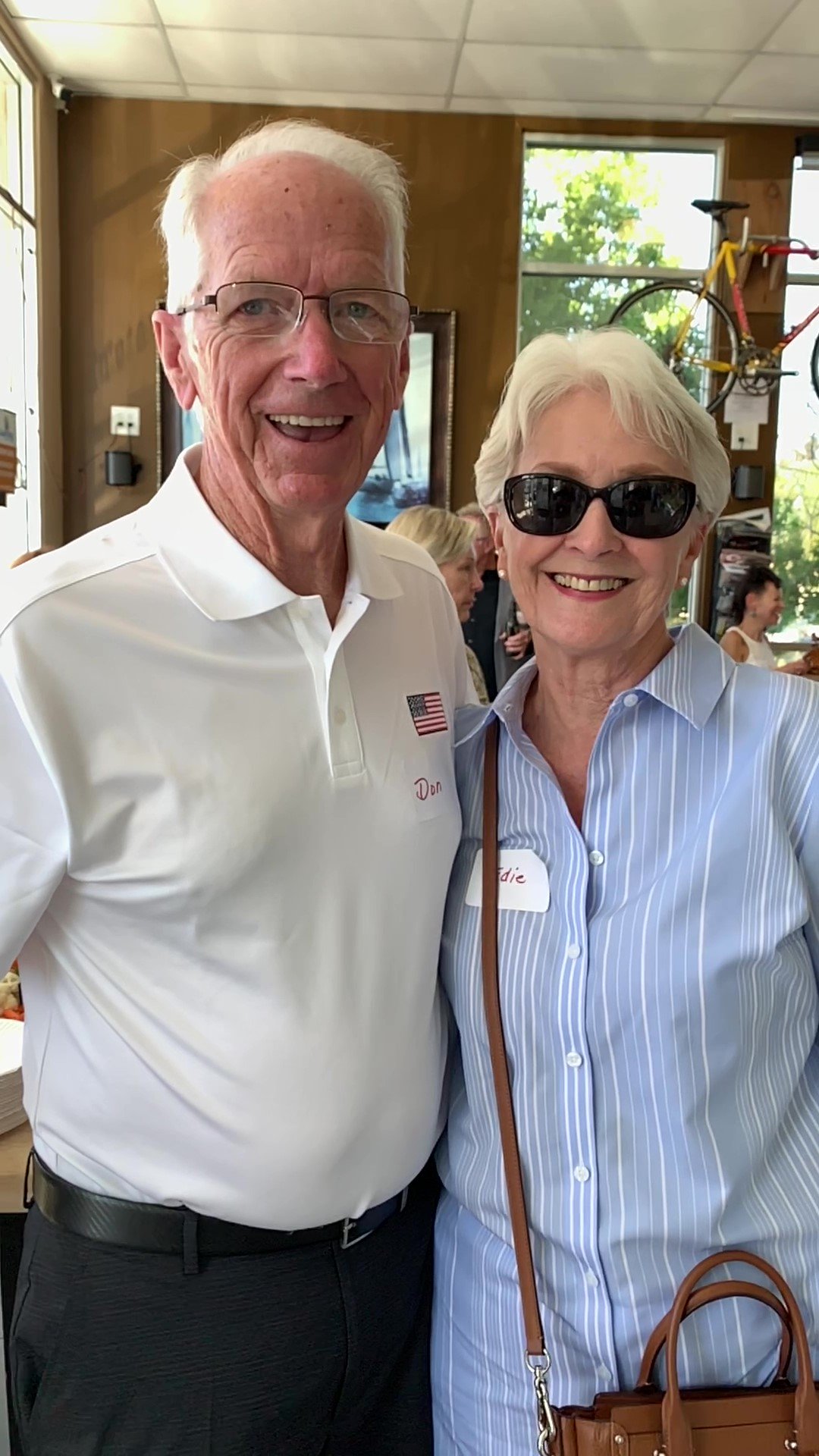