The last eNewsletter (from Europe that is)

Today’s column is the final eNewsletter! (That is, the final article about our trip to Ireland, Iceland, Greenland and Scotland).

Last weekend, the Holland America Line Ms Rotterdam docked in Reykjavik, the capital of Iceland. Unlike the other ports we visited, which were sparsely populated, Reykjavik has a population of 125,000 in the city, and twice that amount when the surrounding suburbs are included.

But, in Reykjavik, Greta wanted to get out of the city. She had one special request on this trip: to visit the famous Blue Lagoon, about 35 miles out in the fields of volcanic rock. One requirement: bring your swimsuit.

The Blue Lagoon is the largest outdoor mineral bath in Iceland. People come from all over the world to bathe there because of its healing powers, particularly for ailments of the skin.

Before entering the large lagoon, people are required to shower. Then, they wander down to the 95-degree, give or take seven degrees, milky waters (color caused by minerals) and, contrary to some beliefs that swimsuits are optional, swimsuits are required. After all, there are children enjoying the lagoon as well.

The Blue Lagoon in Reykjavik, Iceland

Most popular attraction in the lagoon: the swim-up, walk-up bar. I enjoyed a frosty Gull beer, an Icelandic brew. Two hours and 15 minutes later, we were on the bus and heading back to the city.

On the second day in Reykjavik, as we often do in overseas cities, we rode a Hop On Hop Off bus to visit the major attractions in the city. We got off the bus to enjoy the Opera House, which is almost as unique and attractive as the Sydney, Australia Opera House. The arts are very important in Reykjavik. 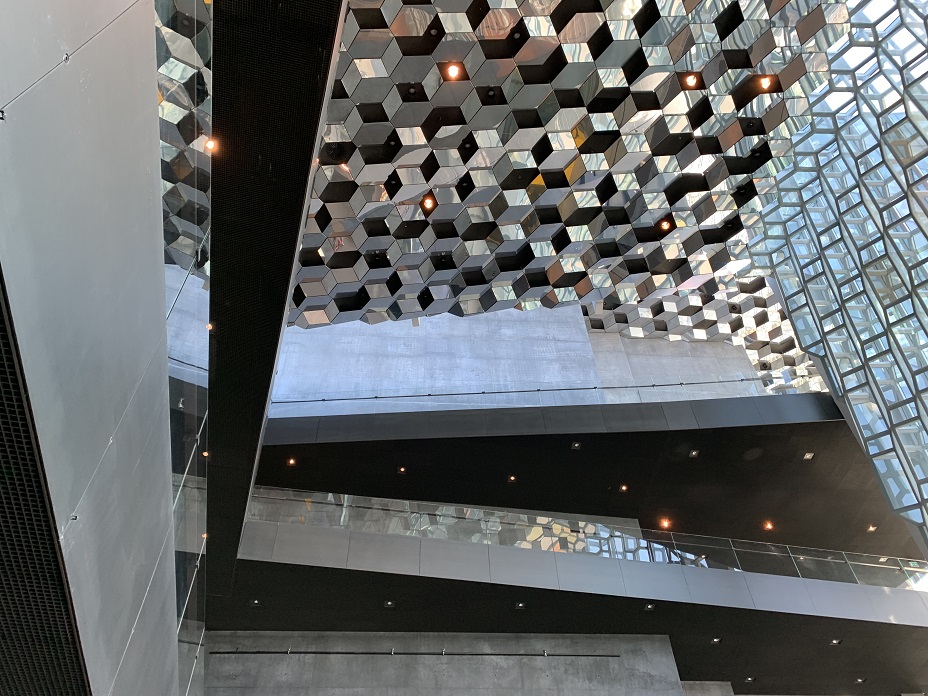 The last land we visited on the trip was Scotland, making three stops. The first port was Lerwick, a pleasant little town in the Shetland Islands, best known for the Shetland ponies. We didn’t see any horses as we just went ashore and walked around.

Turns out that Lerwick was one of the most enjoyable shore visits of our cruise. Cute shops, quaint homes with well-manicured lawns and gardens and friendly people. Like this man doing some maintenance on his 100-year-old boat. 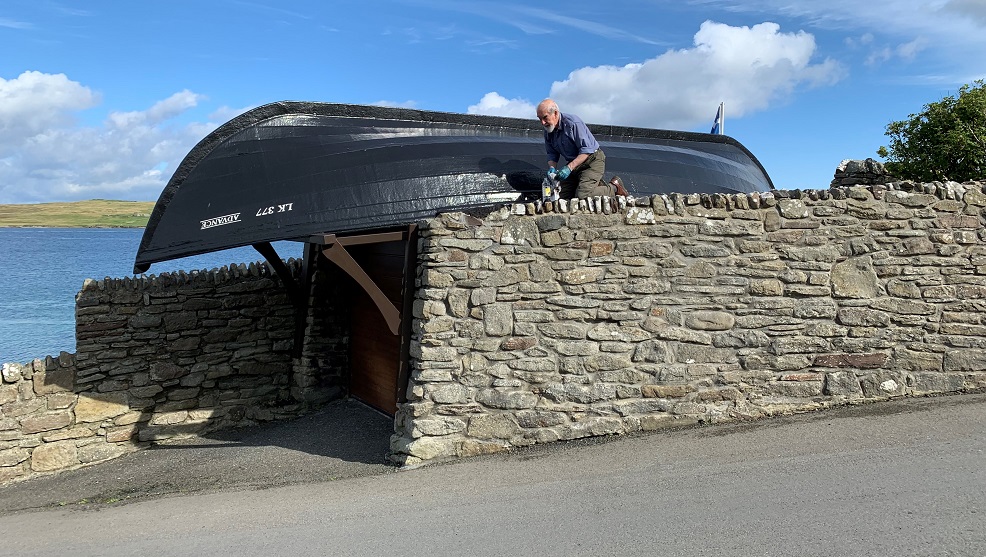 We did a little pre-Christmas shopping there. 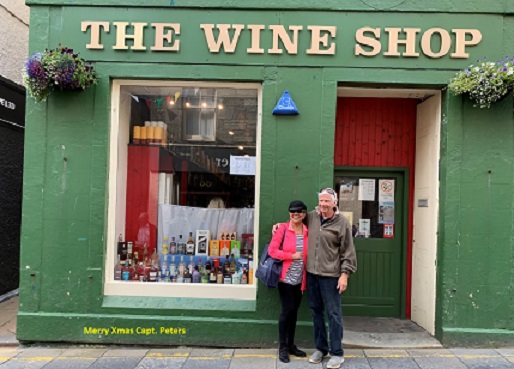 The Wine Shop in Lerwick 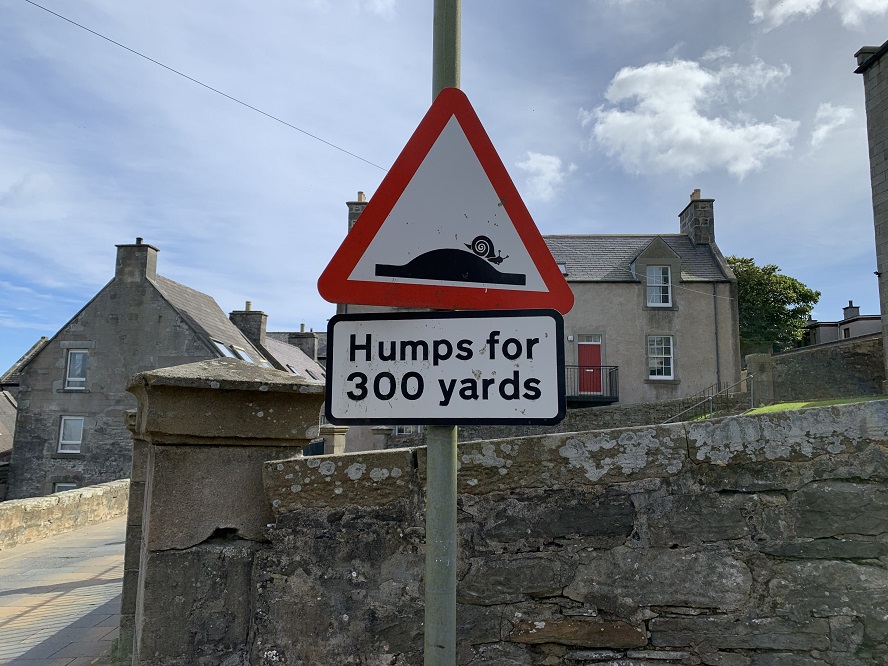 Stop number two in Scotland was in Invergordon, a small city, and Inverness, a larger city. Took a bus tour to Inverness but ended up enjoying the quaintness of Invergordon more. On the bus one sees endless fields of malt and barley, which is where the famous Scotch whiskeys come from.

The Invergordon local church has one of the tallest steeples we’d ever seen. 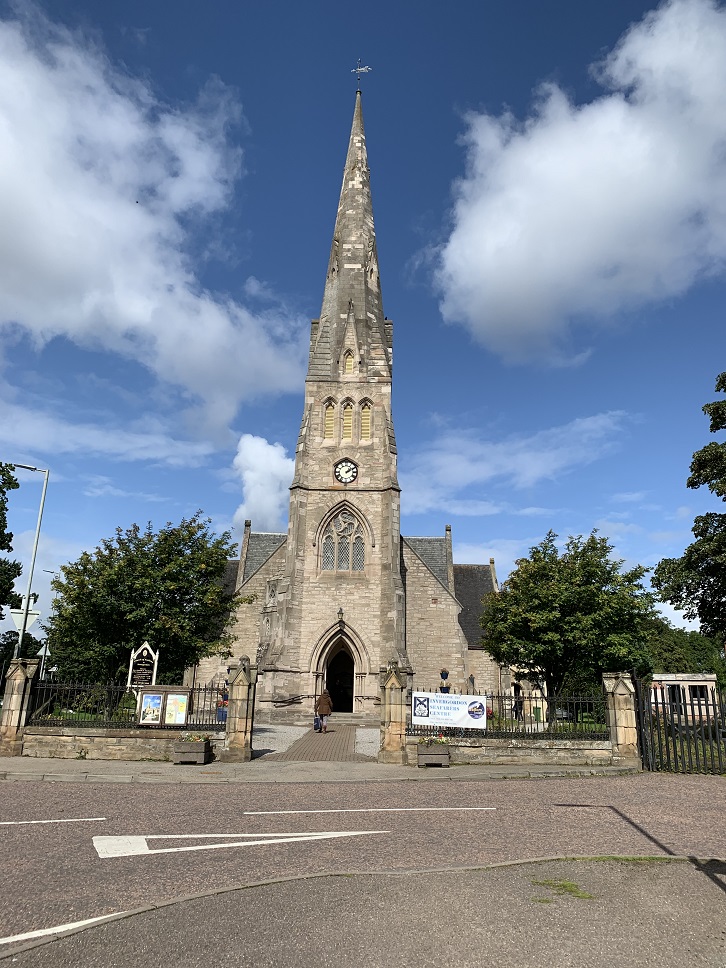 We did not go to Loch Ness, where Nessie the lake monster is rumored to hang out but in Inverness did see a man fly fishing for salmon in the River Ness.

Invergordon has about a dozen murals painted on buildings around the city. It has a mural walk Invergordon. Greta joined in on a tug of war on this mural. 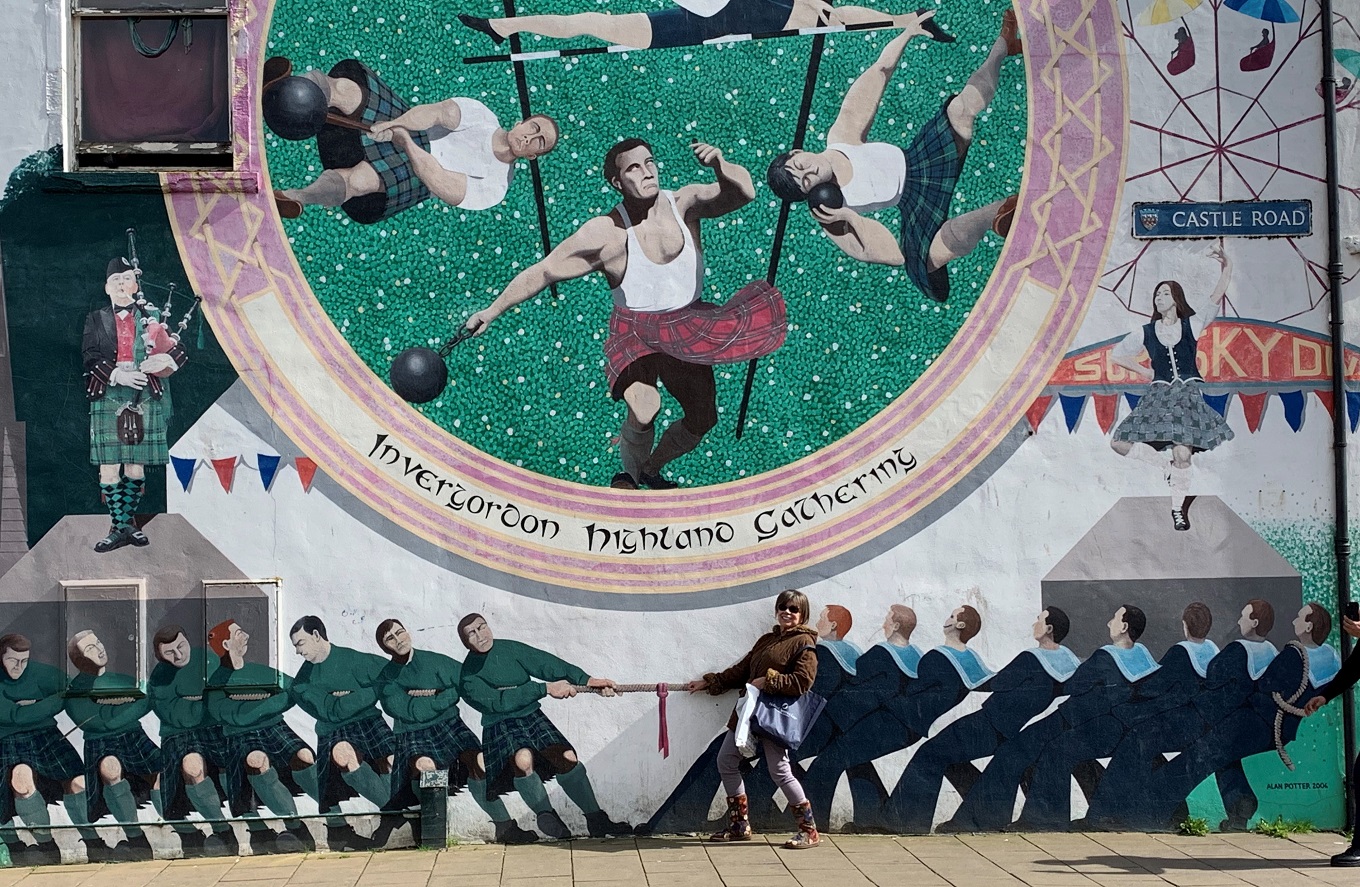 Look closely at tug of war to see who is pulling

Just prior to the ship departing the pier, a bagpipe band played for ships’ passengers songs such as My Bonnie Lassie and Amazing Grace. Here they are on the pier. In the next few weeks, after when we get home, I will post a video movie of the trip, including these bag pipe players. 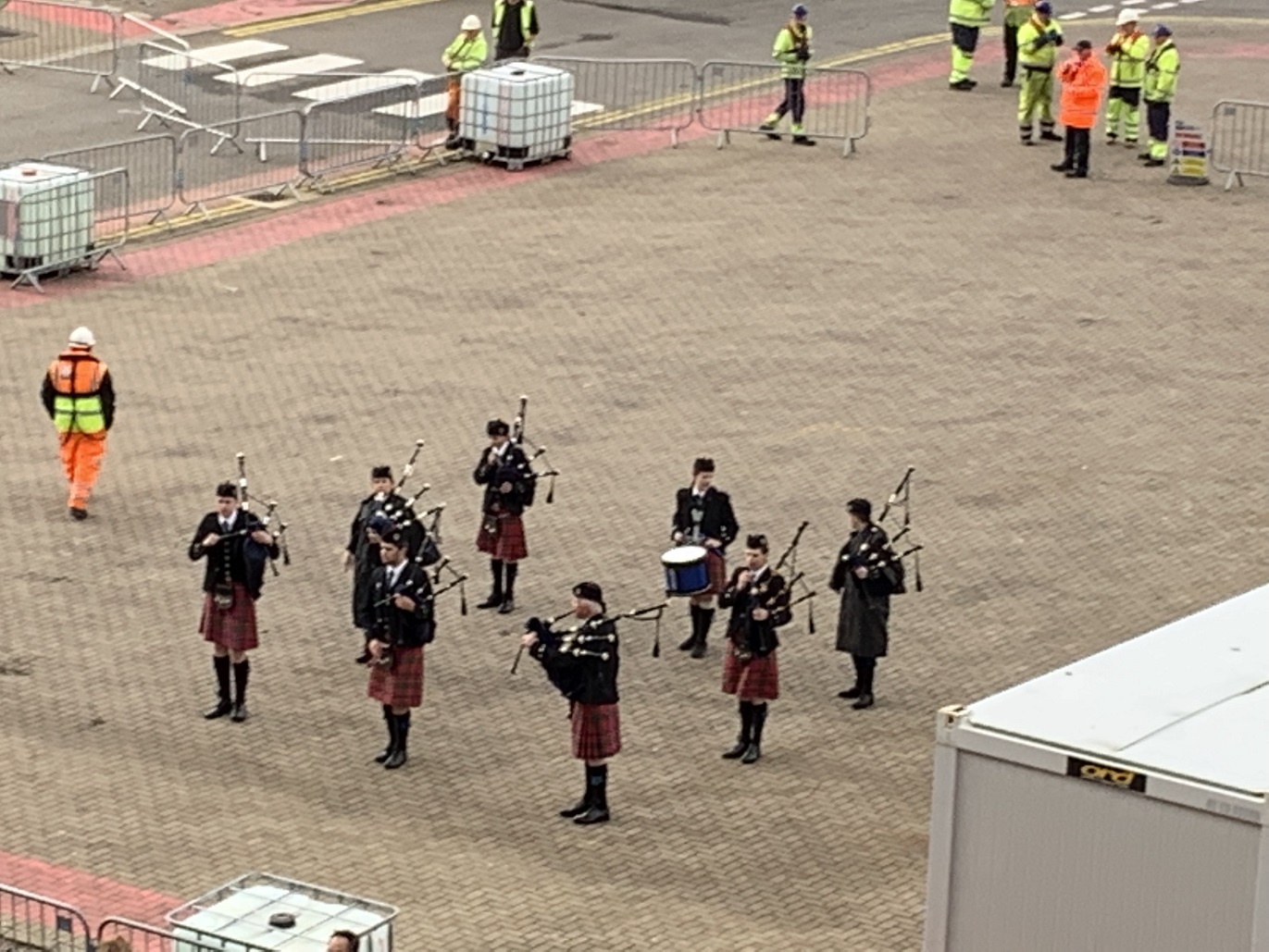 Port number three in Scotland was Edinburgh. The ship docked at South Queensferry. We took a bus tour from there to Edinburgh. What a bustling, happening city Edinburgh is. More pubs than we could believe. The famous Edinburgh Castle stands visibly above the city. Impressive city but busy and congested as can be.

Edinburgh also is known for famous authors who were born or lived there. Among them: Sir Walter Scott, Robert Lewis Stevenson, Sir Arthur Conan Doyle and J.K. Rowling. There are many statues and residences where the authors lived in Edinburgh. 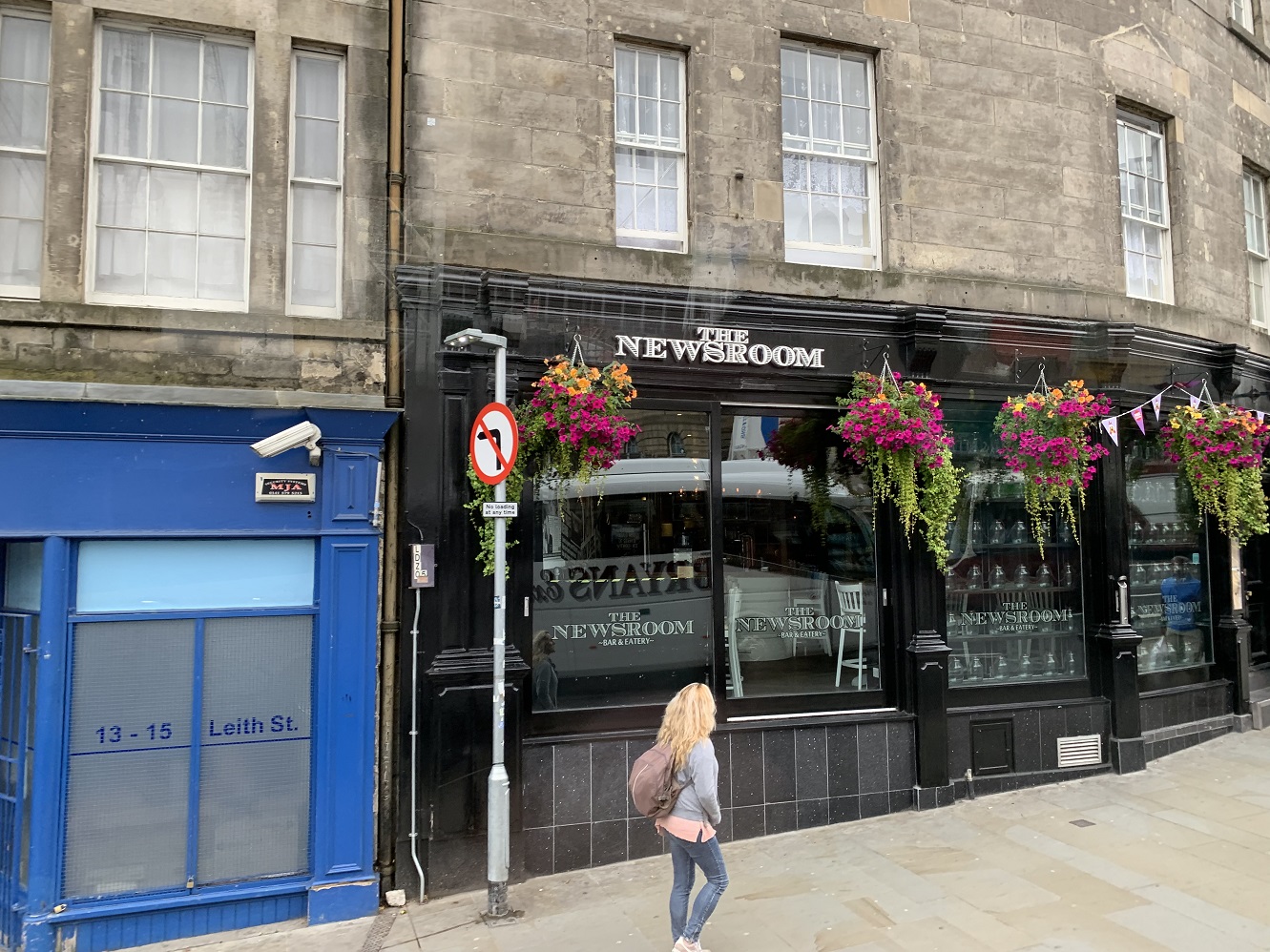 Lots of writers in Edinburgh at the Newsroom Bar

While waiting to board a tender boat to return to the ship, one of the volunteer greeters from South Queensferry, upon seeing my University of Michigan block M on my shirt, approached me, dressed in his kilt, and said, “I’m Paul, a Purdue University Boilermaker.” He had played football at Purdue and now was coaching sports in nearby Edinburgh. We had a good chat. He grew up near the Bronx. 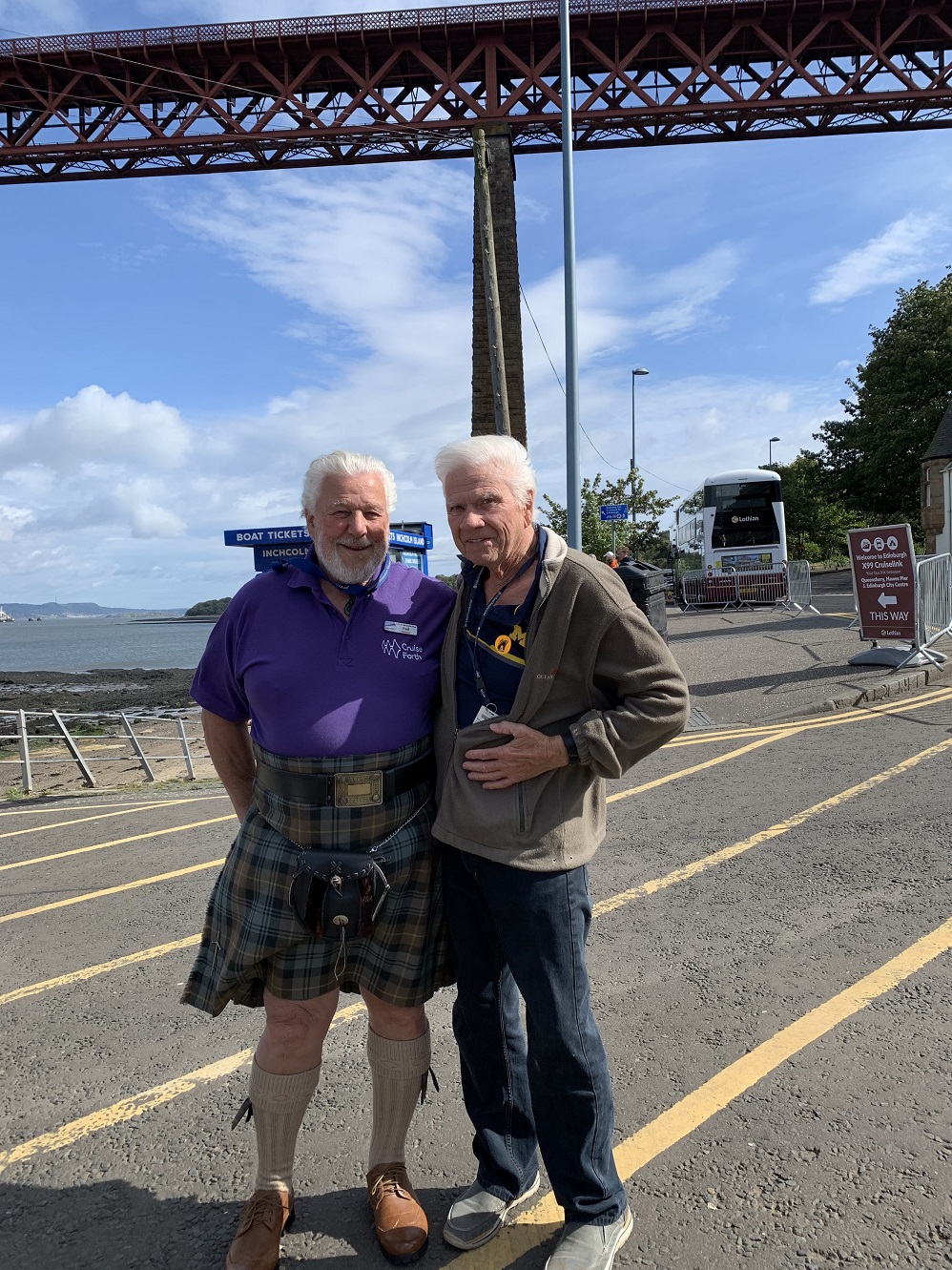 Paul from Purdue with Tom from Michigan

On board ship, Greta and I chose “open seating,” which means the dining room steward seats you with different people each night. Now, Greta and I thought we had taken quite a few cruises in our 21 years together. Perhaps about 15.

One night we were seated with a nice couple about our age, David and Judy Egerton, from Victoria, British Columbia.  We got along nicely with them, as Judy is an author and David illustrates her books. We asked them if they do much cruising. Are you ready for this? By the end of this year, they will have logged 92 cruises, making our 15 cruises seem like a paltry sum.

In next week’s eNewsletter, we get back to the business of dating and finding love for the older set. We didn’t see any romances form on the ship, although perhaps behind closed doors some materialized.

Thanks for your comments about my cruise articles. Glad so many of you enjoyed them. Keep the questions and comments coming.