Today’s e-Newsletter reminds me of former San Francisco Chronicle columnist Herb Caen. He was a San Francisco icon, who wrote columns for 60 years. His was the longest-running column in the United States. He wrote between five and seven columns per week, totaling–in the neighborhood of–16,000 columns. He often referred to his columns as “three-dot journalism.”

I admired his “three-dot journalism,” (as he defined it), style of writing. His comments were often not complete sentences, but crisp, clear and interesting. He was a gossip columnist. If he mentioned you by name, you’d be famous in maybe a good way, or a not-so-good way.

His mention about people patronizing San Francisco’s Victoria Station restaurant, the restaurant chain for which I worked eight years, virtually launched Victoria Station into becoming the fastest-growing chain in the United States for a period of time in the 1970s.

On occasion, Caen would describe a column as “Spraying to all fields,” which referred to hitters in baseball who would hit to all fields, meaning his column that day was all over the place, covering a plethora of topics or comments, often not related to each other, with three dots…between items. 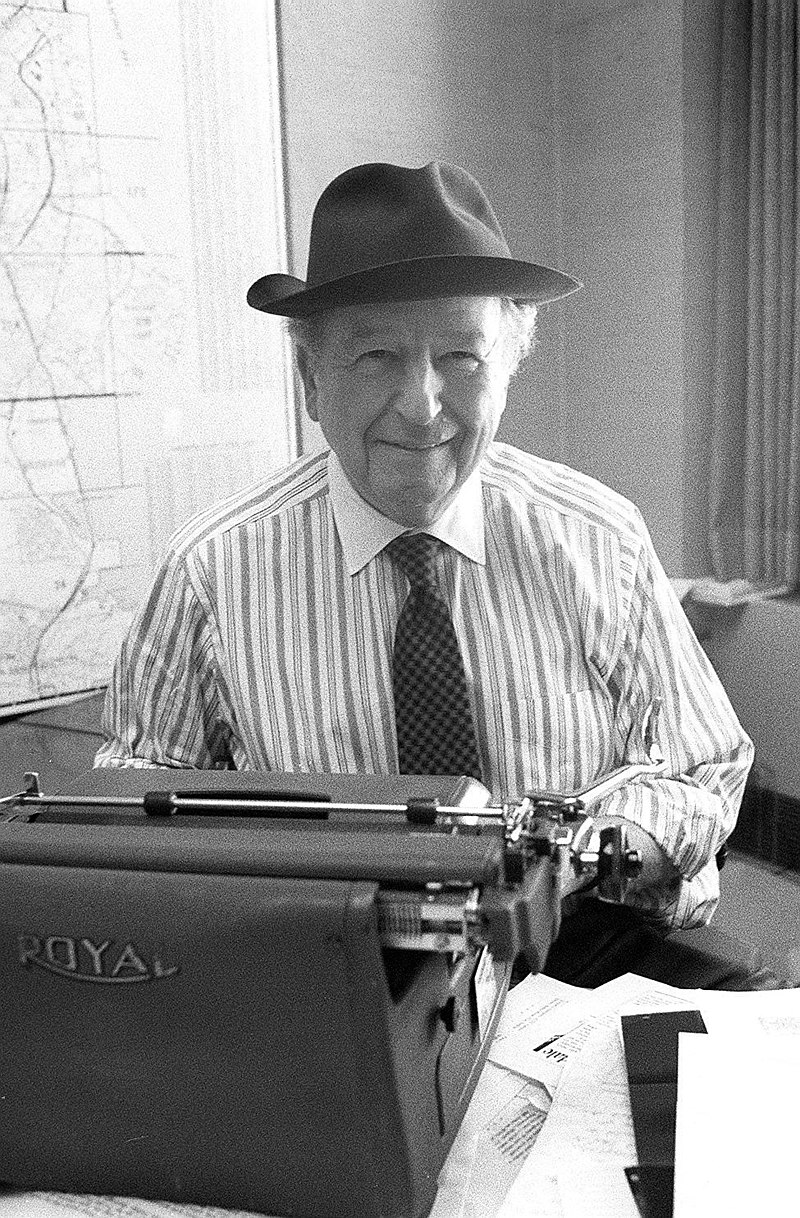 1994 photo of Herb Caen with one of his famed “Loyal Royal”  typewriters, upon which he typed 16,000 columns
(photo courtesy of Nancy Wong)
At the end of today’s e-Newsletter, there is a link to Wikipedia’s description of Herb Caen.Today’s column reminds me of one of Caen’s “Spraying to all fields” columns; it covers five different items. It’s dedicated to Herb Caen.

Champ A – Cheryl, “I want to add one note about Meetup.com groups. They are not always free. Some are held in facilities that require rent, some serve food, etc., and those places ask for a contribution, although it’s usually minimal.”

(And a reminder from Tom: Meetup.com is not a dating site, but a great place to meet and make new friends. And then, who knows where those new friendships might lead?)

Cheryl added, “Another tip about long-distance relationships: People should maximize the time it takes to know someone by communication through face-time, and telephone a LOT, between in-person visits.

Champ B – Chris, “I have been reading the letters from your Champs, about the problems and questions they have when meeting someone, a distance away. As I read the questions, I kept thinking: Why don’t they just Skype the other person?

“Then, you can better see what and who you are dealing with. I know over my long life (Chris is 84), I more than once have fallen in love with a voice, only to be disappointed because the voice didn’t match my vision of this person.

“I’m wondering, could it be that some of our Champs don’t know about Skype?

First, let me tell them, IT IS FREE! Yes, FREE (after some possible, minimal, set up costs mentioned below).

“Tina (my partner of 14 years and now my wife) and I have been using Skype for over 10 years. When she is in England, and I am in the states, we Skype every day. I call her at 12:30 p.m., my time, and she is sitting waiting for my call at 8:30 p.m. her time. We can see each other and talk for hours. It is almost as good as being there, except we can’t touch.

“This would be the answer for your Champs who are talking to someone on the phone, but still are doubtful about what to do and how to handle the situation.

Setting Skype up on a computer is easy, and it only costs about $25 for the camera and the wires. (Most new computers already have built in cameras). After that it is free. I have it on my computer, and, Tina has it set up on her Ipad. My daughter has it on her cell phone; she and I talk that way when I am in England.

So, my advice–to the lonely widow who has met Mr. Wonderful on line, or, that lonely old guy who is sure he has met the love of his life–is: after you’ve spent time talking on the phone, or emailing, and you are thinking about travelling a good distance to meet them, or sending them money for a plane ticket, start Skyping them first.

“You will learn a lot about the person you are in touch with, when you see them while you talk. You could be pleasantly surprised or you could save yourself from a major disappointment.”

From a male Champ who requested to remain anonymous: “After reading last week’s e-Newsletter (about senior online dating sites), I simply felt responsible to relate what I and several friends have encountered on a certain senior dating site, upon which my membership has been long-since cancelled.

“This website has the most hackers and scammers of all of the dating sites. When I was on the site, a hacker took over my profile, presented himself as me…messaging women, asking for their direct emails, then going after them for money…so many grisly tales of attempted scams…

“Many of the women and men on the site are not the actual person whose picture is posted on the profile.

“The site is a dangerous dating site Tom ….

“A caution is simply to never provide your direct email. If, and when, you are persuaded this person is real, you can talk on the phone. Unfortunately, often the person barely speaks English. Plus, a red balloon is when there are misspelled words in their messages and/or incorrect sentence structure.”

While our anonymous Champ was referring to a specific senior dating site–he requested not to mention it by name, even though we’ve identified it previously–what happened to him on it could happen on any dating site. For gosh sake, please be careful when online dating, regardless of which site you use.

3 Why wait so long to meet in person?

A couple of weeks ago, we wrote about a widower who was planning to meet a widow face-to-face who lived 845 miles away. Many of you suggested he meet someone closer to where he lives.

About the same time, I heard from a widow in New York state who lives a little over an hour away from him, and, I suggested to her that she contact him. She did. Now, they talk on the phone and plan to meet face-to-face in late June.

My question: why wait so long? That’s two months away. At the least, do what either Chris or Cheryl suggested above. See each other via Skype or face time on the phone. That might save disappointment before they meet in person.

However, I guess there is no rush to meet in person, IF,  just being in contact with the other person eliminates the loneliness they both feel. Then, maybe it doesn’t matter to either what the other one looks like, or how they present themselves, or that the other person may not even be who he or she claims to be.

I am planning to write about whether it’s important or not for senior singles to have a written list of the qualities they seek in a mate.

Plus, perhaps, some daters may even have a separate written list of the habits or characteristics in a person that would be deal-breakers. Smoking, for example.

If any of you want to share your list(s) or your thoughts about having a list, I’d love to hear from you.

As I recall, it wasn’t always a dream job. He was pretty demanding…

…Here’s to you, Herb. We are toasting an Irish Coffee to you at the world-famous Buena Vista Café in San Francisco, where the Powell /Hyde Cable car turns around, and the view from there of Alcatraz, and where it’s rumored that you had more than one or two of those Irish Coffees…