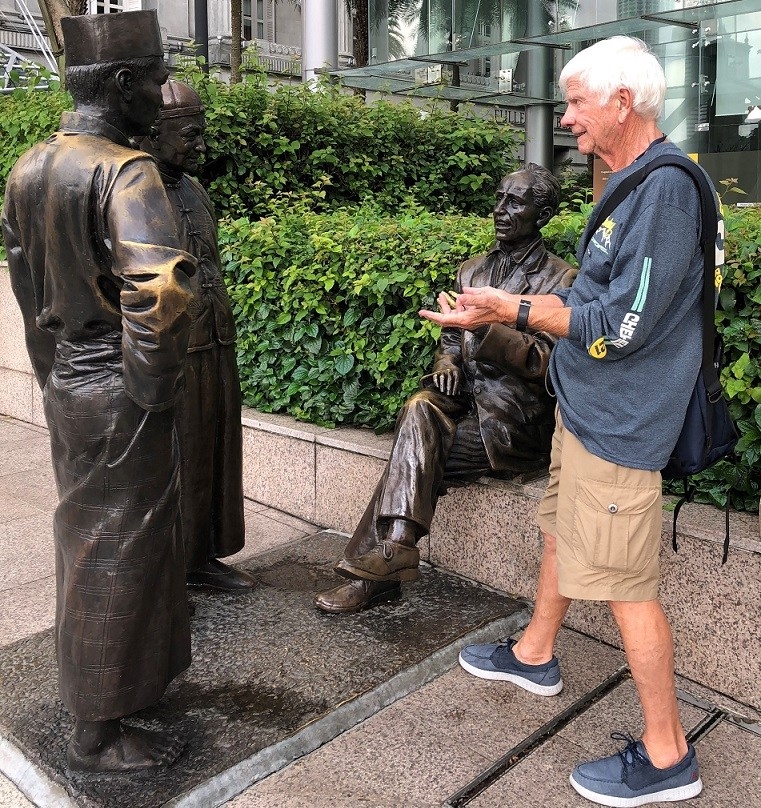 On Life and Love after 50 e-Newsletter March 8, 2019
by Columnist Tom Blake
(There are two parts to today’s e-Newsletter)

First, welcome to our new Champs who have signed up for the
e-Newsletter in the last couple of weeks. Our group keeps
growing.

Part One – Champs respond to the “In senior dating, do multiple marriages matter when judging a new mate?” topic from last week’s column

I’ve often said, and I’ll say it again today: Our Champs are among the most knowledgeable, open, and cooperative group of mature adults on the topic of senior dating and relationships of any group anywhere in North America. Here are responses from nine Champs (5 women, 4 men) to last week’s newsletter topic:

Mary Lou, “One of my dearest friends has been married five times. His most recent marriage is great, at least it looks that way from where I sit. He seems to have a keeper now (in his 70’s) and they have been married for over 10 years.

“I, on the other hand, have only been married once: 17 years, divorced for 36 years. I was only 20 when I got married, and I believe I did it because I thought I was supposed to. It’s what we did back then.

“Senior multiple marriages don’t matter at this stage of my life. If I met a man with whom I clicked, no matter the number of marriages–or even whether or not he had children–I would be glad for him in my life.

I have no intention of getting married, or, living with someone again. I would, however, happily participate in a LAT (Living Apart Together) relationship, no matter how many times he was married. Perhaps I might feel differently if I were younger; now I don’t see the relevance of the number of marriages. I think the man’s heart, health, intelligence (and ability to drive at night – lol) are way more important.

John, “I understand that the number of times a person was married (multiple marriages) is a factor to consider, but, putting a label on someone early in a relationship also denies both people the potential of finding compatibility with each other.

“It may also find the other person cannot commit to one relationship and then you know the checklist was right, but only then. While no one wants a track record like Elizabeth Taylor (eight marriages, seven husbands, married Richard Burton twice) or Zsa Zsa Gabor (nine marriages), they apparently were willing to take that risk each time to find happiness with someone since happiness eluded them from just being rich.

“We are all unique and have to consider all the factors within a person to decide about a potential mate in senior love instead of selecting relationships simply by a checklist that uses cold facts over emotional acceptance.”

Gena, “The number of prior marriages (even five) isn’t as important as is the full disclosure of such events before a budding relationship turns serious.”

Joanne, “One of my theories: if you fall off a cliff it hurts – don’t keep jumping! I’ve been divorced once, and I learned from it. Don’t need to do that again.

“Too many people don’t get to know the other person well enough to make that kind of decision. I’m seeing someone that I really like. We’ve known each other 40 years. That’s a long time and we should know each other by now. He’s been divorced three times. That is a red flag for me, but we’ve discussed this and both agree the LAT (Living Apart Together) relationship works great for us.”

Bruce, “A person has many relationships in life, especially while single. Some work, many do not, so why worry about it too much?

Jon, “I’ve known two women, both with multiple marriages; one was the president of a singles club, the other was a worker in the cafeteria at the agency where I worked. Both claimed they had been married eight or nine times. Ages were only 40’s or 50’s so I don’t know how they found the time for all that. Once was enough for me, I’ll stick with my dogs (and Sharon).”

Stella, “As we age, marriage doesn’t seem quite as important to some. We no longer have the same goals: establishing a home, raising a family, building a future together. Sometimes, it can be a hindrance financially – think social security benefits, taxes, etc.

“And where is the need? We’re not going to have any more babies. We can do the very same things in a loving, caring relationship as in a marriage.

“Take marriage out as a goal, and you open up endless possibilities.”

Dee “I’ve had five marriages. My current sweetheart and I have just enjoyed our two-year anniversary. We will marry eventually, but now is not the right time financially.

“I do not regret any of my marriages because each one was amazing in its own way. All of them served their purpose and made me a better person. And since my last name begins with the letters ‘Cinque,’ which means five in other languages, it’s appropriate somehow!

“Now I have the best relationship of my life, so I have done something right!”

“Being available and willing to marry doesn’t make them automatically a good candidate for marriage.

“Sadly, people don’t learn from history. We make the same mistakes over and over, and the behaviors that sabotaged our past marriages, we bring into future marriages. Why are people surprised when they get the same results? Another failed marriage.”

Tom’s only comment this week on the “multiple marriages” topic: Oops. We aren’t going to call them “failed marriages” anymore. We will call them “marriages that ended.”

Part 2 – A pleasant experience and a new Champ

Most websites have a banner across the top of each page that shows that website’s major categories. The purpose: to make navigating that site easier.

My Finding Love after 50 website has eight categories. One of my categories is “Consulting.” I seldom refer to it and frankly it’s not accessed too often by website visitors.

But it’s there because, on occasion, someone will want to talk to me for a half hour or an hour about a senior relationship issue he or she is having, and doesn’t want to make a therapist or counselor office visit.

Most of the time the person simply wants a man’s point-of-view. I do charge for my time, but am told it’s reasonable.

On Tuesday, a woman from the East coast, who was not a Champ, emailed me via the website and scheduled a consultation. Turns out she was intelligent, friendly and pleasant. She had an issue she wanted addressed immediately. We tackled it together in an hour.

In the end, I feel I benefitted as much from our conversation as she did. Plus, she’s become a new Champ and will likely join the Finding Love After 50 Facebook group.

One of the most rewarding things about my writing is when I hear from readers that I’ve helped them, or when I see a couple out and about around south Orange County who say, “You are the reason we met each other, and look, we’re still together.” 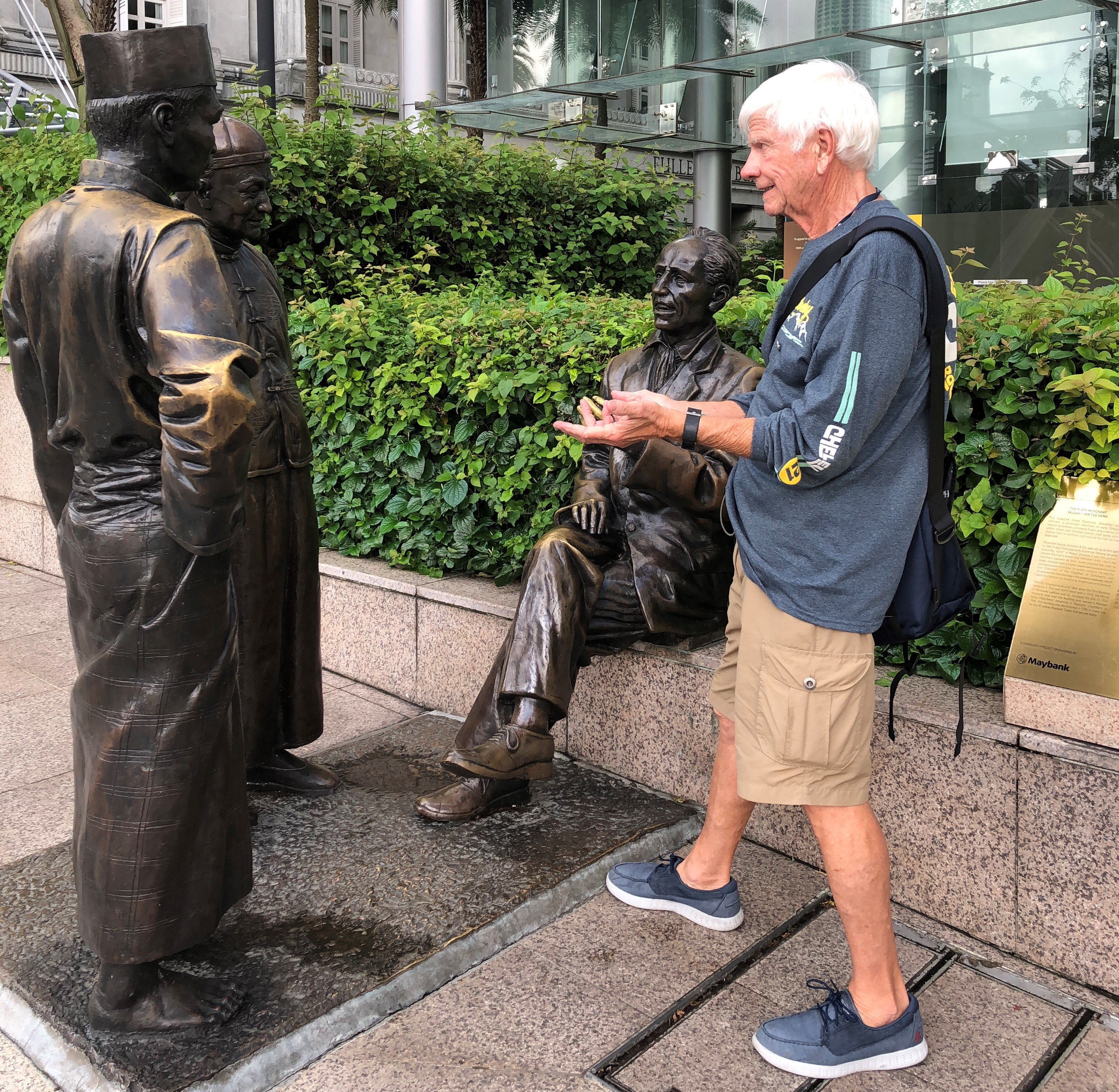 Dispensing advice in Singapore along the river walk. But did they listen?

The link to the consulting page on my website:
https://www.findingloveafter50.com/consulting