A mortgage refinance made sense for me and other stories

Last Friday morning, I received an email from a long-time friend who used to be a yacht captain on boats in Dana Point Harbor. He had read the eNewsletter about the homecoming king and queen and wrote to touch base. “Take care. Hope you are well,” Champ Captain Richard Carnesale signed off.

About six hours later, I’m sitting in a rather large waiting room of a large doctor’s office in nearby Laguna Hills, with Greta, who was having an eye examination. It was like mask-city; every person was wearing one. I saw a man emerge from one of the consultation-rooms and walk toward the front desk. I said to Greta, “That man looks like Captain Richard.” I didn’t know for sure because of the mask.

Then the lady at the front desk called his name. He walked there. I moved to within 10 feet of him and said, “Thanks for the email this morning.”

We had a nice chuckle about the coincidence and talked for a few minutes after he checked out.

Ten years ago, Captain Richard and I worked together on a story about a yacht-Ponzi scheme that happened in Dana Point Harbor. Captain Richard had worked with the man for 27 years who swindled several investors. Here is a picture of Captain Richard from an article I wrote in The Dana Point Times on July 13, 2012, about the case. 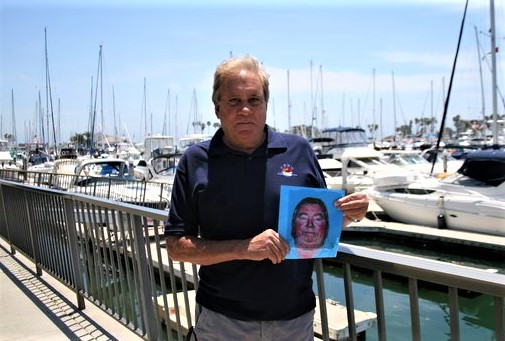 Captain Richard Carnesale with photo of the man who swindled investors

I also wrote an ebook titled “Dana Point Yacht Ponzi.” You can order it on http://www.Smashwords.com for .99 cents by using the promo code BM58K

From Seattle – A Star Spangled Night

Champ Ellen, Seattle, emailed: “In case you don’t remember me, I’m the lady who sang the National Anthem at the Anaheim Angels baseball game, oh so many years ago, that you did a lovely column about.”

Tom’s response to Ellen: “Of course, I remember. I was seated behind home plate near you. An Angels’ employee came and escorted you to the pitcher’s mound. I noticed your name on the scoreboard monitor. You did a great rendition of the National Anthem.

“When you returned to your seat, I introduced myself. I think we might have had one coffee date. That column was titled, “A Star Spangled Night,” and was published on August 30, 1995, almost 25 years ago to the day. It was the 61st column I had written (now over 4,000).

Ellen added, “I read in your 8/14/20 eNewsletter that you met Diane Sawyer. I’m envious. I have a picture of her in my scrapbook from when she crowned Linda Felber, America’s Junior Miss in 1964. Linda was from a little town 20 miles away from where I grew up.

“I also have a picture with Johnny Cash. He sang at a Luther League Convention when I was in college. I was charged with keeping him comfortable. He was very quiet.  A friend was the President of the National Luther League group, which is how I got the ‘job.’

“Earlier, in 1967, I sang for that convention in the Dallas Convention Center. I thought it would be my biggest audience ever: 17,000 young people. But, the 35,000 fans at the baseball game topped that.

“Paul and I have been together for nine years. Our initial meeting was thru business, thru a networking group. Then some years later, someone else that was a referral from that same networking group, also knew him and set us up to meet at a political breakfast.

“I remembered him; he didn’t remember me. He was in a relationship when we first met.

After breakfast, we planned to have coffee, but in the end, we got together to see a house jazz concert and the rest is history.

“We are happy to be in Seattle with a little cooler weather. I’m still ‘working.’  Became an insurance agent specializing in Medicare. I keep trying to retire, but it’s hard when you can help people understand this very confusing plan. Fortunately, it’s seasonal.”

On Sunday, August 9, I received an email from a Champ named Larry who travels between a summer home in Michigan, a home in Florida, and the home of his daughters and granddaughters in Laguna Niguel, California. He has been a widower for a year after 45 years of marriage.

He became a subscriber to this eNewsletter (a Champ) by searching online for senior dating in Orange County. He found my FindingLoveAfter50.com website and signed up.

In exchanging emails, we discovered that Larry, and my Uncle, George Pardee, were great friends while Larry was the City Manager of Grand Haven, Michigan. That was like 40 years ago.

Larry was in Laguna Niguel this week so we got together for lunch at Tutor and Spunky’s, my former deli, in Dana Point. Larry will be back in Southern California in October, November, and December. 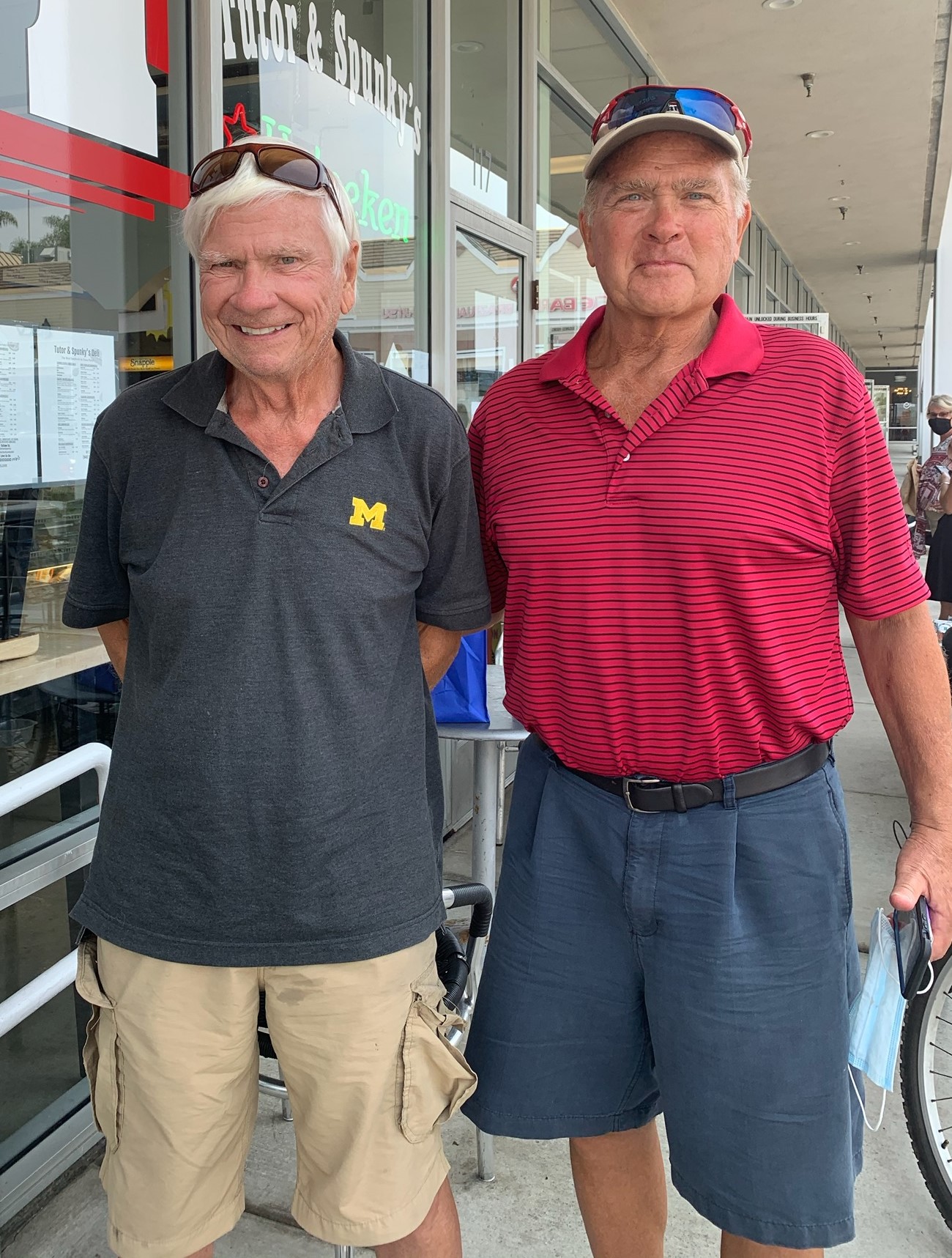 My friendship with another remarkable Champ – Les Jones, a World War II vet led to a mortgage refinance for me that made sense

Les Jones has been a Champ and a personal friend for more than three years. He’s also a widower. He’s 94 and lives in San Juan Capistrano. A couple of months ago, we were talking about real estate. I told Les I’d like to refinance my mortgage but three lenders I contacted felt I wouldn’t qualify.

Les said, “You should contact my friend Vanessa Schwartz. I’m working with her on financing some real estate and she does incredible work, especially with veterans.

I called Vanessa. She said, “We can make this refinance happen.” My interest rate was 4.25% at that time.

On Wednesday this week, Vanessa, Les, and I got together for lunch in San Juan Capistrano to celebrate my refinance. My loan went to 2.88%. A vast improvement over the first loan I ever had in Orange County in 1987 at 13%.

Vanessa said, “I was so inspired and enlightened by Les’s stories and how so many that had served allow us to enjoy the freedoms that we have today. It gave me such a higher level of appreciation and gratitude. It made me want to help and this seemed like the perfect way to help those men and women and their families.

“I know the Sinise Foundation is near and dear to Les, not to mention that every dollar goes to those in need (none kept for management). I’m doing this, not to pay back, but to give recognition and appreciation. It really feels good to do this and I hope to write a lot more checks.”

Because of our Champ Les, and because I am a veteran, and because Les introduced me to Vanessa, she donated $1,000 to the Sinese Foundation. Here’s the three of us after lunch. 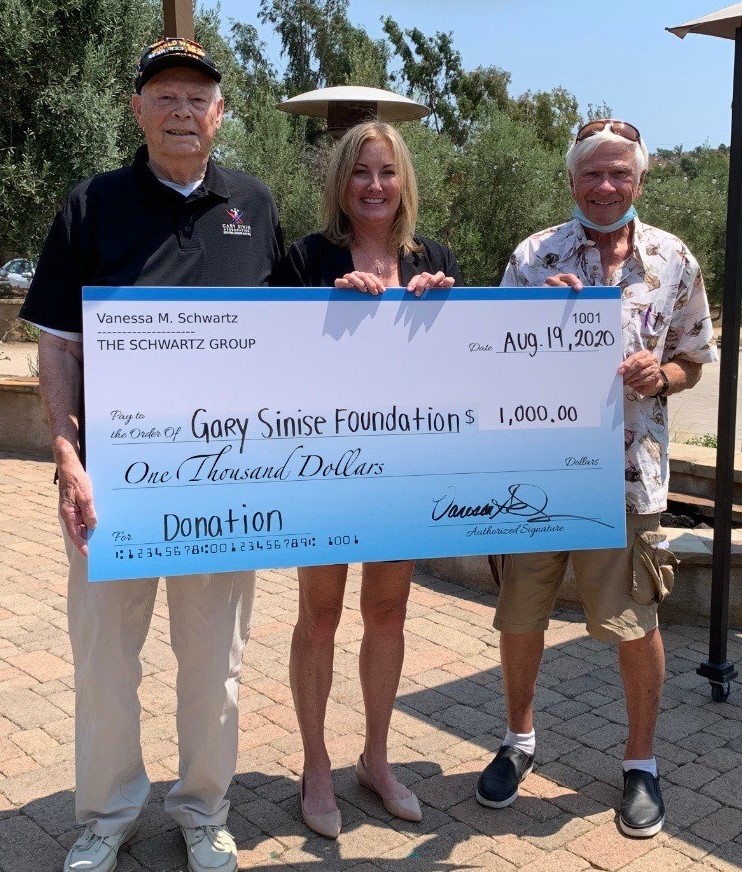 It was a busy and rewarding week. Knowing so many of you incredible Champs is an inspiration to me. Stay safe.