The Letter – Senior Sex no time to waste

You may recall that last week’s eNewsletter was a bit off the wall. It featured a woman, age 30, who insisted on a six-month pre-marriage trial with her fiancé, age 59, where they slept together, but had no physical contact, no hand holding, not one hug or kiss. She considered the trial “a success.” They married.

After the wedding she was shocked to find out he wanted sex.

There were many, varied responses to her story. The first came from Mark, who said, “I believe you made this up to bring good cheer to your readers. Am I right?”

I replied: “Greta and I are out of town for a week. When I get back to Dana Point, I will scan her letter and send it to you.

“I found it in the garage in a box of old column stuff. Thought to myself, this can be a column someday.

“Letter is for real. Glad you enjoyed it.”

Mark said, “I didn’t doubt for a minute that the letter was real. As they say, you can’t make this stuff up!”

Mark’s right; I don’t have the imagination to create something like that. Here’s part of the actual letter: 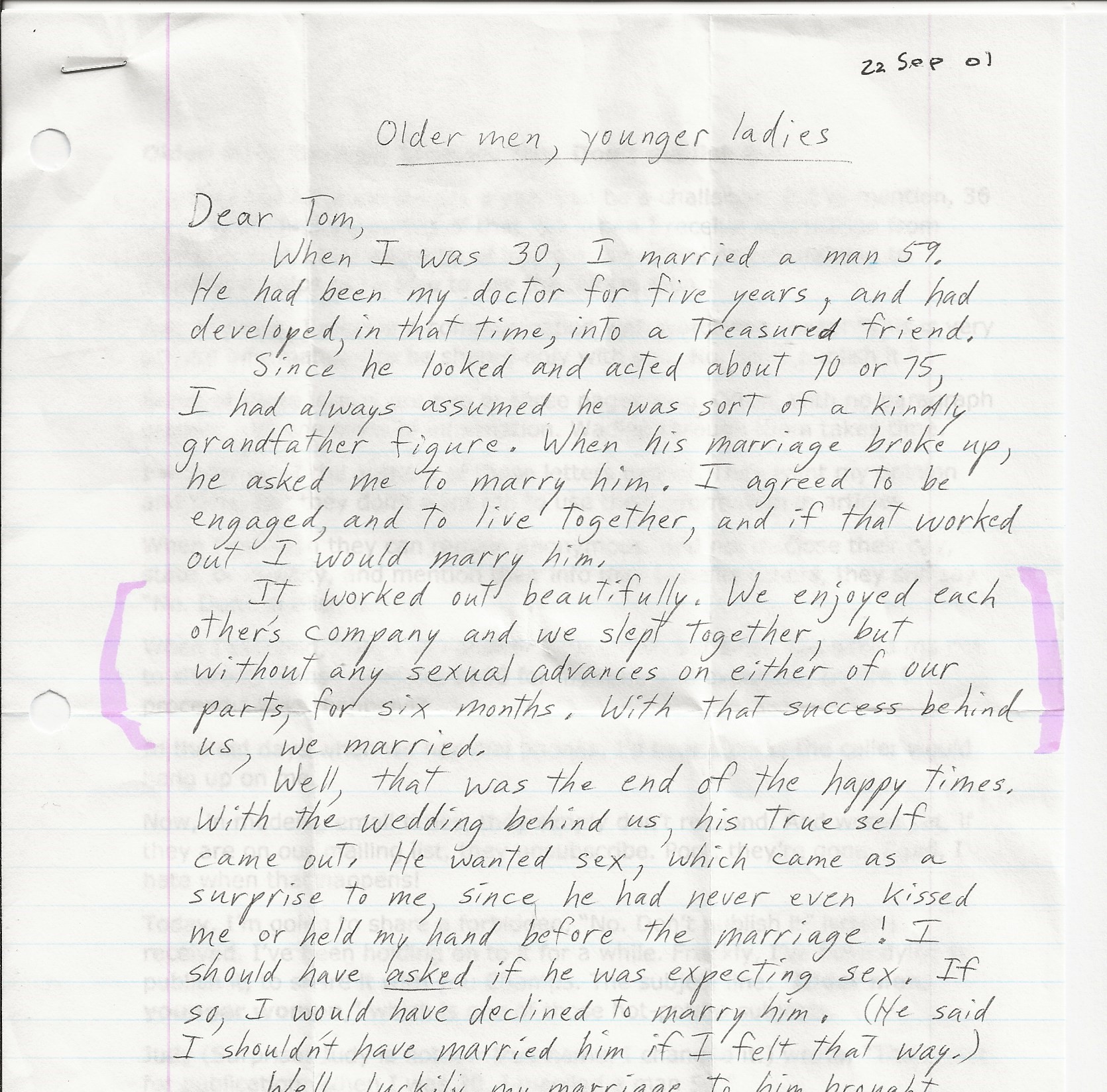 Helen, Arizona, responded, “Thanks for the laugh. Oh me. Sometimes I wonder. Are there really people walking around our country like this? Wonder if she made the whole thing up? Doesn’t matter.

“Phil and I have been together since 2003 after meeting on the Net. Didn’t marry. We are 80 and 81 now. Times are not easy, but we are together. We are one of the couples you featured in your book all those years ago.”

Another response came from Laurie Jo: “I read your eNewsletter and had an immediate, strong reaction.

“Things like impotence can be an issue, but there are ways to work around that and other difficulties when we age. I feel happy that I can still ride my horse, do household chores, and walk without any problems.

“I have friends that have hip issues and things like cancer. My point is: why give up intimacy? Why forego or avoid a wonderful part of being alive and capable.”

Twice a widower, “after two good marriages,” John commented. “I’m nearly 80 and every time I think I’ve heard it all regarding love relationships, something comes along to prove me wrong—such as your article last week. The woman in the story must be totally unaware/naive about how the world works–at least pertaining to how men and women relate to each other physically.

“I’m still actively dating and looking for a life-partner. After several dates with a woman, and if it begins to look promising, we start digging down into the weeds of what we’re looking for in a relationship.

“To illustrate how difficult expectations can be, I met a woman on a dating site two years ago who lives three hours away by car. My thinking was, if we were a good fit, it would be worth the drive.

“It turned out she oversees the caregivers who tend to her disabled sister, about a 10-minute drive from my home. I started seeing her when she was in town once or twice a month for six months.

“Then, she invited me to visit her at her home. I spent two nights with her and slept in a separate bedroom; there was no physical contact during the stay. We saw each other on and off when she visited her sister for about a year.

“She continued pursuing me and invited me to her home again, for three nights. I accepted. (Separate bedrooms again.)

“We were watching a TV movie the second night and I attempted to hold her hand, but she was not receptive. At dinner, the third night, I asked her if she was looking for a physical relationship because some women are not.

“She erupted and said, ‘All men are looking for only one thing!’ With that comment, I promptly left.”

“We had no contact for six months when out of the blue she sent me an email apologizing for how she reacted and wanted to get together again. We did but, it was just not-to-be for me.”

An important point from John’s story, Laurie Jo’s comments, and Helen’s comments, even at 70 or 80, for seniors physical contact is important to many men–and women.

Lesson for dating seniors: It’s best to discuss each person’s sexual expectations in the early dating stages of a potential relationship. At 80, we don’t have any time to waste.

Message for Mark: I didn’t make this up either: Because this column is about a letter, and about not having time to waste, the song, “The Letter,” by The Box Tops, 1967, popped into my mind.

“Gimme a ticket to an aeroplane
Ain’t got time for a fast train
Lonely days are gone. I’m a-going home
My baby, just wrote me a letter”

Link to Box Tops song (click on open wide screen and then the red arrow to begin video ):
Link to song “The Letter”