“It’s like we are ghosts on a ghost ship.”
It could have been us.

The words, “It’s like we are ghosts on a ghost ship” caught the attention of Champs Ron, and his wife, Lee, this past Tuesday, in an online article on Bloomberg.com, about two ships dealing with the COVID-19 virus.

The reason Ron and Lee took an interest in the article was that they, and Greta, and I , were discussing the current situation in the cruise-ship industry, including the ordeal of those same two ships, during Happy Hour last Saturday afternoon.

How could that be?

In California, where the four of us live, bars and restaurants are closed, except for take out, and people are supposed to be staying home.

Yes, the discussion took place during Happy Hour, where the two couples were telephone face-timing each other from their respective homes.

Three days later, on Tuesday, Ron and Lee read the online Bloomberg news article in which, Claudia Osiani, 64, of Mar del Plata, Argentina, in a phone interview from her cabin on the Holland America cruise ship, ms Rotterdam, was quoted: “It’s like we are ghosts on a ghost ship. We just want to go home.”

During Happy Hour, I had mentioned the sorry plight of the ms Rotterdam and ms Zaandam. In the same breath, I said how fortunate Greta and I were to not be on one of those two ships. Why in particular those two ships?

Well, Greta and I love to travel. More specifically, we love to travel on cruise ships. Our adopted cruise ship company is the Holland America Line (HAL). All the cruises we have taken have been on HAL vessels, except one Viking river cruise and one short Princess ocean cruise.

On HAL, we are what’s called 4-star mariners, which means we’ve logged a lot of sea days (245) on multiple HAL ocean cruises.

When you spend an extended time on a cruise ship, you start to feel the ship is your friend. You trust it. You trust the captain and the crew. When a cruise ends, and you say good-bye to the crew, there’s a tug on your heart because they’ve become your friends, and you realize you probably won’t see them again.

The ship in the HAL fleet that feels most like home to us is the ms Rotterdam. In 2010, we rode her from San Diego to Lima, Peru, and back for 30 days, stopping in several ports along the way.

In 2013, we boarded the Rotterdam again, this time for 32 days, cruising from Amsterdam to the Canary Islands, back to Amsterdam, and then to Russia, Estonia and Sweden.

Our third trip on the Rotterdam was last August, from Amsterdam to Iceland, Greenland and Scotland for 22 days. One of our Champs, Marilou, and a friend of hers, Pat, were, by coincidence, on that cruise. 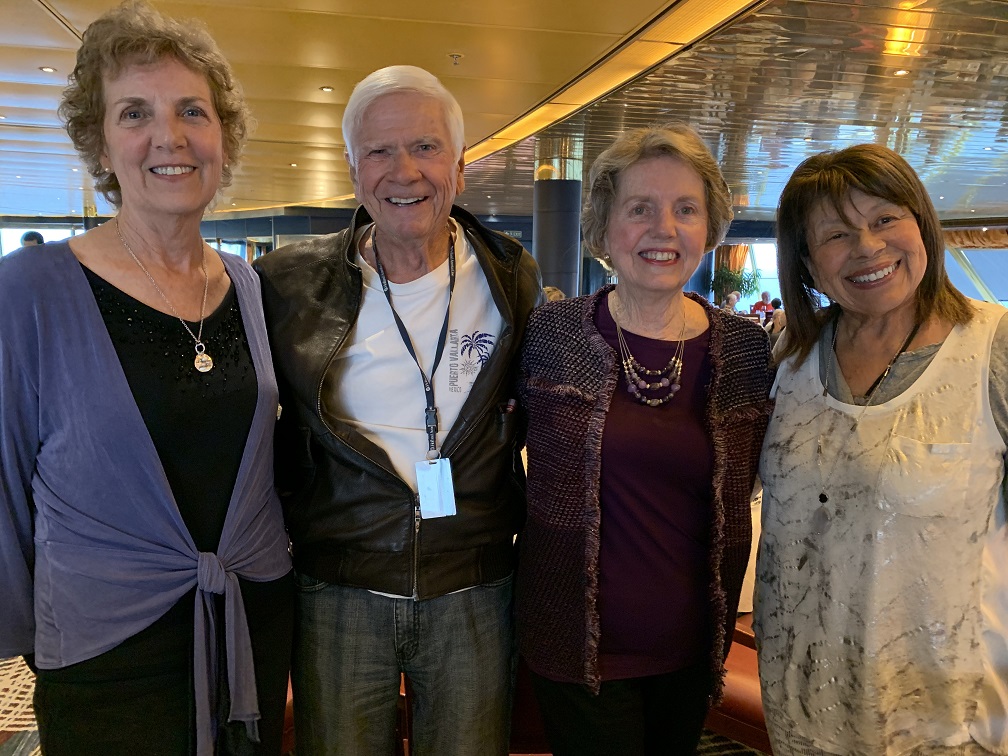 Other HAL ships we’ve taken include the ms Zaandam in 2017, for 34 days, from San Diego, around South America to Rio. 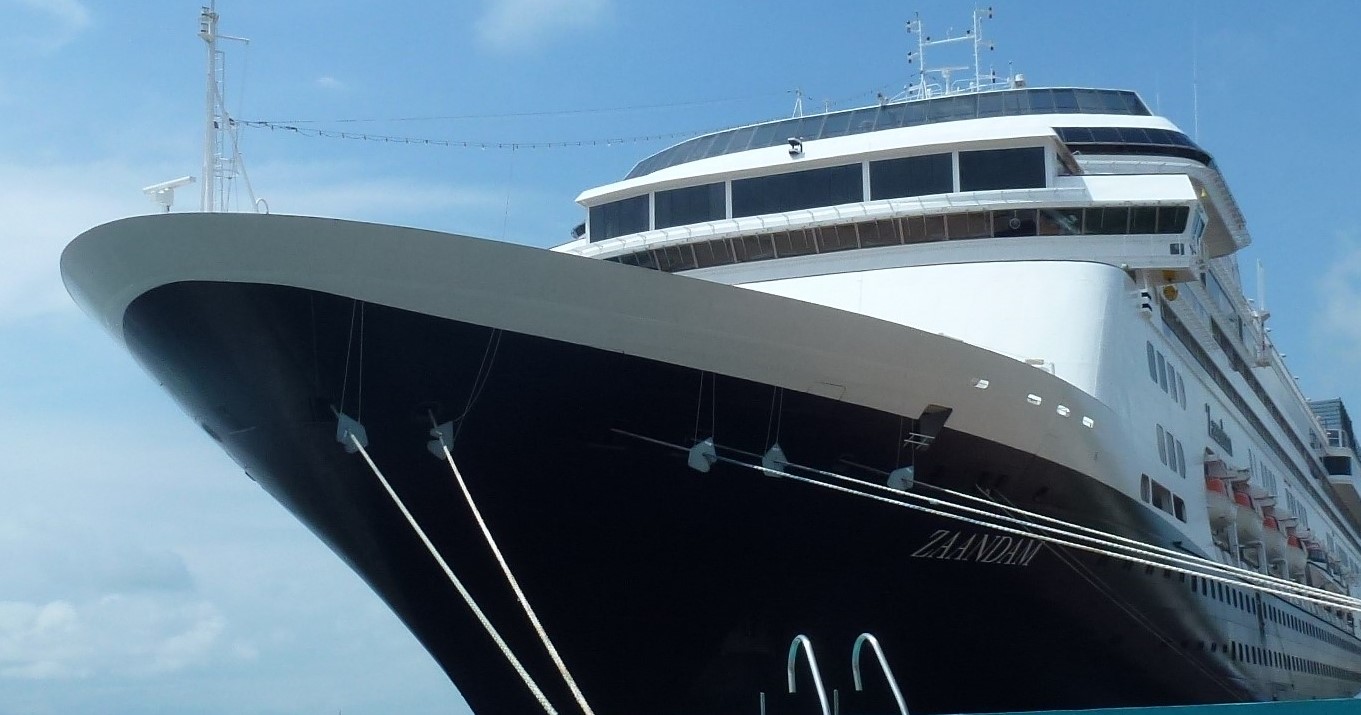 ms Zaandam in Ushuaia, Argentina in 2017 – southernmost city in world   photo by Tom

In 2018, we were on the ms Amsterdam, the Rotterdam’s sister ship, for 82 days, traveling from Los Angeles throughout the Far East and back. We visited 34 ports, three of which were in China, including a visit to the Great Wall of China. We traveled on trains and buses in Shanghai, mingling with hundreds, if not thousands, of Chinese citizens. We stayed healthy on that trip.

As the COVID-19 crisis started to evolve, Greta and I watched closely what was happening with cruise ships. We visualized passengers being quarantined to 392-square feet staterooms, some with no windows. Ships in all parts of the world were being affected.

We were saddened to hear that the Zaandam was not allowed to stop in a port in Chile because a virus had infected passengers. Four died. Some of the sick, not all, had COVID-19.

The Zaandam made its way to the Panama Canal but wasn’t allowed to transit through to get back to Florida—too many sick passengers on board.

And then, our old pal, the Rotterdam was sent to assist the Zaandam off the Panamanian coast. Oh my gosh, there they were—two Holland America ships that had been home to us for a combined total of 118 days—caught in the heart of the virus outbreak.

When we saw pictures on the news of those two ships stranded together, we looked at each other, saying, “It could have been us.”

Thankfully, the Zaandam and Rotterdam were finally allowed to traverse the Panama Canal, and, received permission to dock in Port Everglades, Florida.

Greta and I have always been impressed with how careful HAL has been with sanitation. Hand sanitizers placed throughout the ship. Constant reminders to wash hands. Staying in your stateroom if sick. Spraying passengers’ hands when leaving and returning to the gangplank. They are perfectionists for health; we always appreciated the crew going that extra mile.

Travel agents have been crushed by COVID-19. Airline travel down 96 percent. Hotels 80 percent empty. Cruising on hold. When things get back to normal, give them a call. They will be anxious to return to work, as the rest of the world will be.

Greta and I will be traveling again someday, and we’ll be cruising. We hope all of you will give your travel agents the green light to book you on a trip—maybe even a cruise. Trust me, the cruise ship companies will ensure those sea-going beauties will be sanitized from bow to stern and back again.

Here is the Bloomberg.com article link about the ms Rotterdam and ms Zaandam ordeal to which Ron and Lee alerted us:

With so much spare time over the last few weeks, I got busy creating a new ebook, titled, “Senior Dating: Does Age Matter?”  That book is now on the Smashwords.com website, the largest ebook bookstore in the world. It’s all about age and the age difference in senior dating. One chapter features women and what they have to say about age in dating.

Some Champs are quoted in the book.

Another chapter is titled “Cougars.” And another features what men say. Yes, it’s a hot-potato book with controversy. The cost is $2.99. But, I’ve created a 50-percent-off coupon for Champs which will be available for a week. The coupon code is: SC87U

To download the book, click on this link:. https://www.smashwords.com/books/search?query=Tom+Blake . You will see the new ebook cover on the top row. Click on it and click on purchase. Enter in the coupon code box this code SC87U. Your net cost will be $1.50. 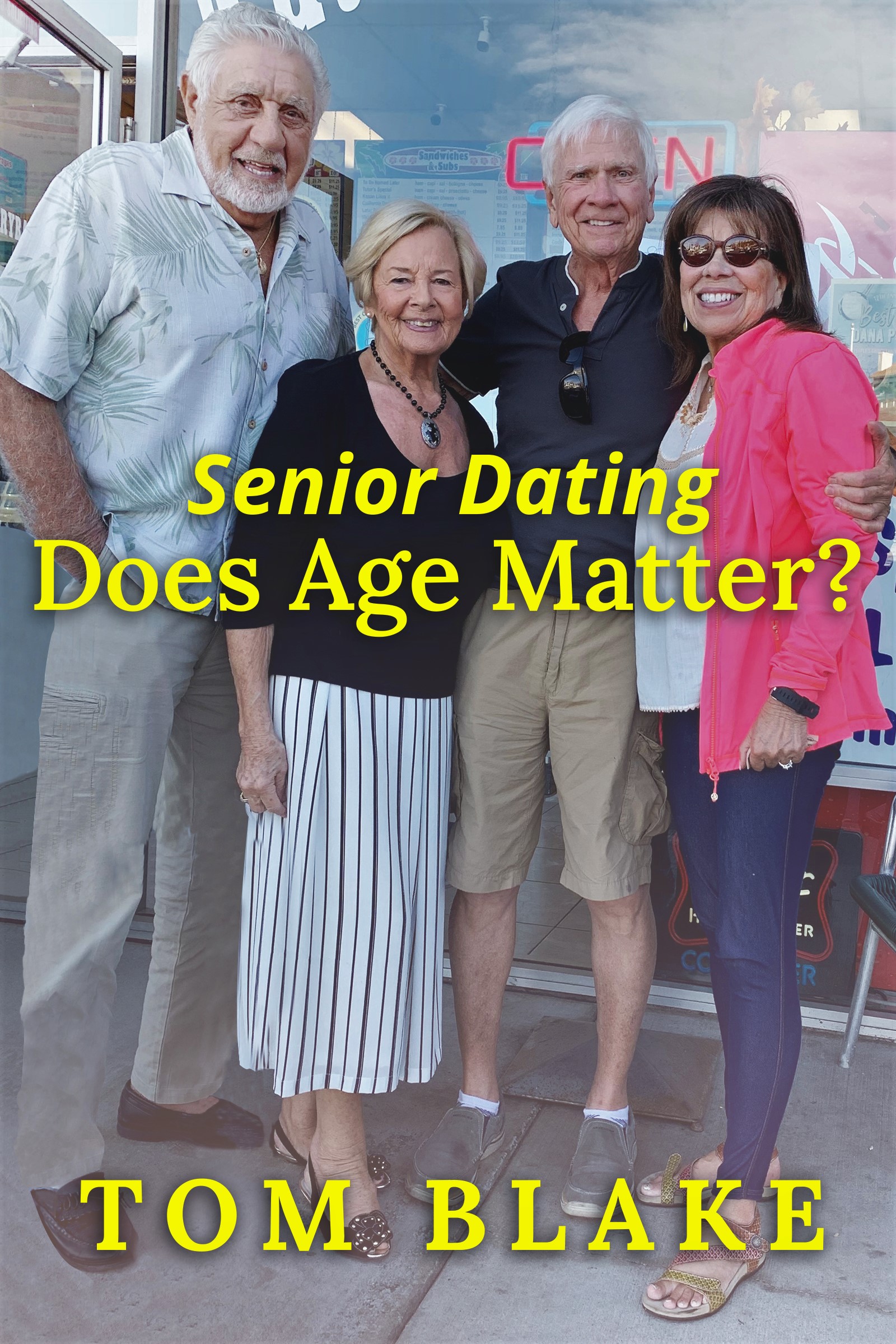 The couple on the left: Champs Chris and Tina and Tom and Greta on the right

After you read it, I would appreciate your comments.