Responses to what do unwed senior couples call themselves

My gosh, I received a bunch of responses to last week’s eNewsletter on what unwed couples living together, age 50+ couples call themselves. The responses were so good, I wanted to share some of them with you.

Kaitte responded with her suggestions, including her favorite:

Tom’s comment: As I pondered Kaitte’s list, I realized some were song titles or words from songs: “Cara Mia,” Jay and the Americans; “There Goes My Reason for Living, Engleburt Humperdinck; and “My True Love,” (an early 1950’s classic by Jack Scott, see link below). And the classic 1953 Dean Martin song, “That’s Amore.”

Art, Fla., “I enjoyed this article, since many of our friends are unwed senior couples. Joanie is 73 and I just turned 80. We’ve been together five years.

When I introduce her to friends who have not met her, I simply introduce her as “Joanie.” If I am referring to her with people who do not know her, I call her “My lady friend.”

I have never been asked if we are married, but most strangers assume that we are married. I see no need to complicate things, and just go on with the conversation.”

Trixie emailed: “This topic is mighty familiar. The only answer I’ve ever used that I like is, “He’s my main squeeze.” That isn’t an expression younger people are familiar with. I’m still refining my answers to suit the setting.

I notice my main squeeze seldom answers such questions. But several times he has said, “Friend.” Really? Hmmm.

Such questions can unintentionally call up personal issues the questioner isn’t aware of.

Repeat offenders get this from me: ‘He ISN’T my husband! We’re not married!’ (And as one restaurateur countered, ‘Really? Why not?’)

On cruise ships: open seating, same as you and Greta. We eat with different people almost every night. They just want to be correct, so my answers are not disputed.

Bonus story: we struck up a conversation with a young man at a cruise ship bar. He said he was traveling with his Father-in-law. A sentence later, he was waiting for his girlfriend to join him. That’s OK! Maybe we oldies aren’t The only ones without clear labels.”

Note from Tom: Hard to juggle—having a wife and a girlfriend on the same cruise ship-it better be a mighty large ship!

Trixie added, “Finally, loved your Sea View Pharmacy San Clemente story. We have a similar pharmacy, and a very special pharmacist. He has a gift for not caring about customers’ marital status, it’s never come up. In medical situations, I introduce my main squeeze as, ‘My friend, Main Squeeze.’ It’s never been questioned.”

Carmen, my Jackson High School, Jackson, Michigan, classmate, who lives in Mexico: “I introduce Karen as “My Lady.” She calls me “Carmen.” (his true name).

But we wear gold bands, so people almost never ask.

After a few months together, there was such a big smile on her face that I didn’t want her running around appearing to be unattached. So, I asked if she would let me buy her a gold band. She agreed.

The next day, she asked if I would wear one, too. How could I say no? I gave her a diamond ring on our 2nd anniversary.” 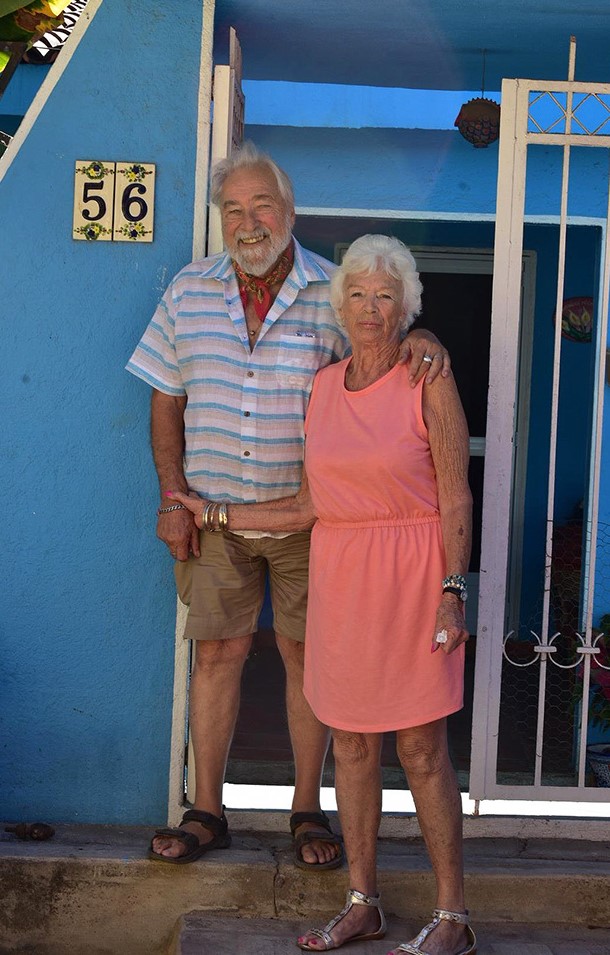 Tom comment: Awe shucks, Carmen, in the 60+ years we’ve known each other, you’ve always been a romantic dude.

Marilyn: “I was married for five years and last year we got a divorce mainly due to issues his family had with our marriage. Should not have been their business but he did not stand up to them on my behalf at the time. We are together now as? We get along a lot better now than when we were married. We travel and spend time together and still love each other. We are platonic.

What would you call us? Ex-wifey, past partner, semi-spouse (liked that one), or what? For simplicity, I just say my husband and people accept that. Any help would be appreciated on a creative introduction name.

Tom’s suggestion: “A DBTFC.” (Divorced back together for convenience)

Linda, “Craig and I have been Registered Domestic Partners for the last five years. We have been together for 18 years. The State of California recognizes it like a marriage but the Feds have just recently been catching on.

I am on his employer-paid medical insurance. It works for us. It’s an easy form to fill out and have notarized and sent to the State. The requirements: one of us needed to be at least 62.”

Tom’s comment: So, do you introduce him as your “Registered Domestic Partner?”

Lisa, “I like the semi-spouse with the hyphen, but also wanted to mention what a friend calls her live-in partner:

‘My undocumented husband.’ This may be met with raised eyebrows or worse in our heavily, politically-correct society, but it is said with a smile and is definitely tongue-in-cheek.

I wish that people would stop being so easily offended at every little thing and regain a sense of humor. It makes life so much better.”

Lynne, “I vote for ‘My Best Friend.’ That’s who I thought of my 20-year partner Joe as. We were together by choice, not a piece of paper or a ceremony.

I believe we were ‘Soul Mates.’ I felt like I’d found the person I’d dreamed of meeting and he felt the same. On our first date, he held my hand and it apparently joined our spirits.”

Mick, a co-worker with me at the Victoria Station Restaurant Chain in the 1970s, said: “I introduce Mary Ann as ‘My sweetheart.’ She likes it. Others accept it. Few ask the follow up question for specifics.

The details don’t matter much these days. I think most people understand there are an infinite number of permutations that fall under the broader concept of ‘committed couple.’”

Sarah, “In the end, what difference does it make? Whose business is it other than the couples? I love the idea of keeping it simple.”

And the winner is? Whatever term fits your situation and feels natural to you. Lots of ideas in today’s article. For me, I like significant other best. It’s worked for 20 years.