Part 1 – Is Barb being too fussy in dating men?
Part 2 – Information on the Finding Love After 50 Facebook page
Part 3 – An upbeat, update from a West Texas Champ

Part 1 – Is Barb being too fussy in dating men?

I admit that I don’t spend much time viewing the Finding Love After 50 Facebook group posts. I prefer to let members do their thing and have discussions among each other. But I do monitor it from time to time. This Facebook group is a closed group, which means I approve of anyone who wants to join. In this way, I try to keep the riff-raff out of the membership.

As of Wednesday, there were 501 members. I do review the posts from time to time and remove some posts that I feel aren’t appropriate to our group. Occasionally, a member will post too many cutesy little signs or sayings as if the site were his or her own personal site, so I remove the posts. Such has been the case recently where a member posts something every day, which can be a big turnoff to others.

Sometimes, I will see a post that stimulates discussion among the members. That happened a few days ago when Barb stated that she was thinking of giving up on senior online dating. She based her comment on experiences she’s had with four men while senior online dating, which she shared. She asked if she was being too fussy.

Barb wrote, “I have been off and on dating sites since I was 60 and now I’m 79. One man I met online was an hour and a half away, we dated two months.

He wanted me to move in with him. I was in the middle of moving in with him, when he found out his daughter was getting divorced. He decided it was not a good idea for me to move in, because he was going to remodel his house and have his daughter and her two daughters move into his house.

Plus, he didn’t like television so he wanted me to wear earphones when I had my television on. Well, that was the end of that relationship.

The second guy I met invited me out New Year’s Eve to a dance. He had a funny little step in his dance that was hard for me to catch onto. He kept telling me all night how well his ex-wife and he could dance together.

While walking me to my door, he put gum in his mouth, and in a minute, he said, “Oh my God, I just lost one of my teeth.” Well that was the end of that man. I just saw him recently, which was a year later, and the tooth is still missing.

The third guy I met seemed nice and we had fun together. My sister lived near me. When her husband was dying, I went to be with her the night her husband was passing and this guy got upset and told everybody I gave him up for my sister. So that was the end of him.

A couple of weeks ago, I met a fourth man online. We exchanged messages. He asked for my email address, so we could email instead of being on the dating site.

But I couldn’t get to know him as all he talked about was that he had lost his wife five years ago to cancer. He wanted to meet a woman who would make his house a home and be his special woman. He wanted me to forsake all others to be only with him.

I tried to talk about the future and what it would be like if we got together. It always went right back to the kind of woman he was looking for and how he wanted her to be his own and love only him.

So now, I’m giving up on trying to find someone. It’s too hard. I think I would rather go it alone. it seems like I can’t find anybody. I don’t know maybe I’m too fussy. What do you think?”

Joel said, “Dating and Mating is just plain hard, usually a long series of meeting people who don’t work out. That’s as good as it gets in my experience and it can lead to a constructive, loving relationship. Each person you meet is a learning experience about yourself and the others who are available.

The population of those still alone late in life contains a high percentage of dysfunction – that’s why we are alone.

It’s like shoes, you just keep trying until you get someone you like, that fits and is comfortable. You don’t quit just because you try on shoes that don’t fit.

I spent 12 years starting at age 54 rejecting and being rejected. I finally realized I had to change, and did, and have been in a wonderful relationship for 5+ years that gets better every day. I have a friend who found love at age 80.

Whenever I hear a story from someone who is discouraged, I suggest they look in the mirror because that’s where the solution is.

I love this part of the Serenity Prayer: May I have the serenity to accept the people I cannot change, the courage to change the one I can and the wisdom to know which one that is.”

Cheryl: “With or without a man, isolating yourself and becoming a couch potato isn’t fulfilling unless you really enjoy that. I find there are enjoyable things to do every day that I want to do (plenty of activities at the community center; movies; classes; visiting people; taking walks on the boardwalk, etc.). At home I have stacks of good books to read, music, and my favorite tv shows. Being without a man isn’t a punishment – there’s still life all around us!”

Cheryl added: “It sounds like you need a dating coach to help you select a man of your caliber.”

Tricia: “Barb, my experiences are similar to yours: I have been trying to meet someone for 10 years – it’s been that long since my last long-term relationship ended. I took a part-time job last year – in addition to my full-time job at a local home improvement company – hoping to meet someone with no results.

I am active on a couple of volunteer boards, I have joined some groups. I feel as though the men I’ve met are just looking for sex and I am not going to just jump into bed with someone.

I will be 60 at the end of this month. I am not sure there’s anyone out there for me but that’s ok – I have a good life and look forward to planning my retirement in the next couple of years.”

Phyllis: “I don’t know that I could ever move in with someone after knowing them for only 2 months– I might want to — but I know how bad my judgement (can be).”

Jeanie, “Keep on keeping on! One day you’ll have a good story to tell. These men are just part of the old story – create a new one with you as the center, standing strong for what you want.”

Carolyn: “Please don’t give up! However, do continue to make new friends (men and women), join clubs and enjoy ‘me’ time. You don’t have to settle, just enjoy life! If you had sat home alone during the past few years, you would not have such an illustrious story to share with us.”

Curtis: “Not too fussy, sounds like what I am finding in looking for a woman. I list I am outdoors, walking hiking & traveling around the area, the woman that contacted me has allergies and can’t be outside, or can’t hike or walk any distances, so why contact me, and then complain I am too active? Why am I not home more? I know what’s at home, nothing.”

Part 2 – More about our Finding Love After 50 Facebook Group

The name of our Facebook group is Finding Love After 50. If you want to join, you can apply on that Facebook page and I review your information. I need to know a bit about the people who want to join, to protect our 501 members from adding people who have ulterior motives that wouldn’t be beneficial to the group.

Last year, we published a column about Larry Coats, a West Texas, gentleman, rancher, and retired US Army Major. He had looked for love online, hoping to find a woman who’d be willing to leave the big city, bright-lights world, to move to be with him on his ranch.

Yesterday, Larry sent an update: “Thought I would just drop a note to let you know that Ellen and I are approaching our one-year wedding anniversary (13 July) and can safely say that we are both very, very happy.

I was initially afraid that she would have trouble adjusting from big city life to life in a small town, but that was never a problem. Anyway, guess things have a way of working out–provided both sides know that it still takes patience and honesty.” 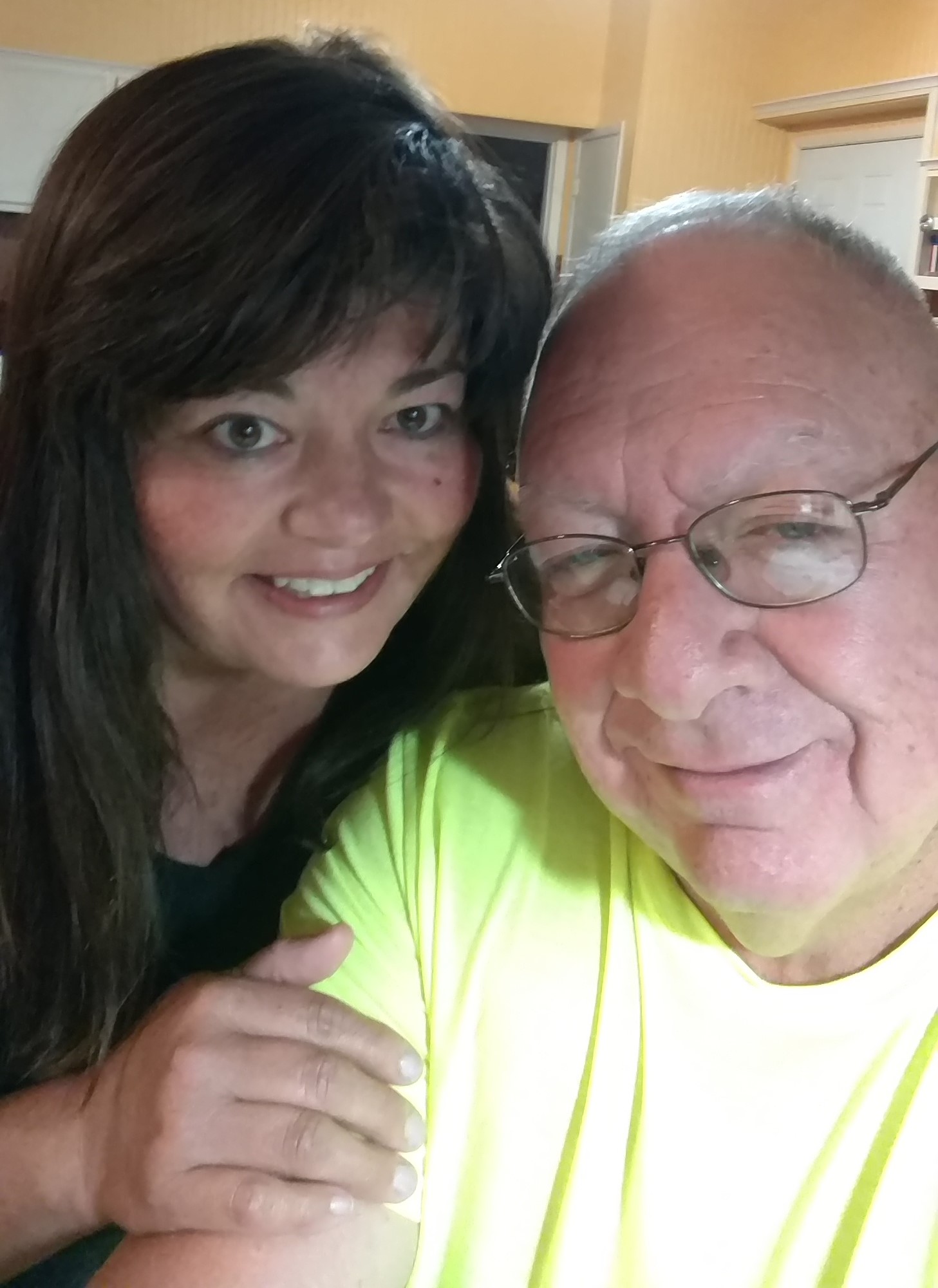 To read the entire August 18, 2017, article about Ellen and Larry, follow this link: