Last week, we shared Diane’s story about breaking up with her man friend of five years because of his adult children, mainly a 26-year-old daughter who said to her dad, “I won’t have a problem with Diane as long as she knows I am the number-one woman in your life.”

Not one Champ disagreed with Diane’s decision to end the relationship. Apparently, adult children affecting relationships is a bigger issue than I realized. Today, we share two other women’s stories that fall under the “interference from adult children” umbrella.

Lee Ann wrote, “I am in a domestic partnership of 10 years that is breaking up because of his adult children. They are 25, 27 and 30. None of them is completely financially independent even though we paid for their college educations and each of them has lived here at least once since they graduated high school.

The oldest daughter is the real problem. She has borderline personality disorder but refuses to seek therapy. She hasn’t had a long-term relationship in 12 years. She hangs on her father when we go out, sits on his lap when no one is around, and recently told him that she won’t come to our house even if I’m not here because he has to “Negotiate his relationship with her.”

Neither he nor I know what that means, and she won’t define it. I am tired of watching this strange dance they do. He seems to be completely dependent upon her moods and desires. She demands that he take her to restaurants every week.

We live on a small teacher’s retirement income and are tapped out. He has overdrawn our accounts five times in the last three months due to indulging his children. We can’t pay down our mortgage because he gives them money behind my back. The two oldest have bigger incomes than we do. But they never treat their retired father. I have a small business, but it doesn’t bring in much extra.

I can’t stay with someone who will allow his children to dictate his life. And who won’t parent them. My adult sons understand our situation. They treat him with respect.

His adult daughter treats me like she’s his girlfriend and I’m an interloper. Years ago, I thought she and I got along great, but she told me I was mistaken, and she resents me.

My advice to anyone considering dating someone with adult kids is meet them sooner rather than later. Assess the situation before you fall deeply in love. She was away at college the first three years we were together; I didn’t know the extent and damage that would be done. I have a step mother myself and at times I don’t adore her, but I totally respect my father’s right to choose whomever he loves and marries.”

Terri emailed, “I’ve enjoyed your articles for years. I’ve learned a lot about compromise, communication and more. I’m hoping you can give me guidance.

I have been divorced for over 12 years. I am friendly with my ex who is the father of my two children that are recently out of college and have moved out. I am very close with my children.

I am 55 and am lucky to have found and dated for four years a widower, 61, who I love. His wife died of breast cancer eight years ago. He is truly the sweetest, smartest, most caring man. We have so much in common and are best friends. He waited until his early 40s to marry and have a child.

He has a 17-year-old, highly functioning autistic son. When I first met them, my boyfriend did absolutely everything for his son including grabbing a spoon for him, tying his shoes etc., things his son could have done himself. Over the years, with my encouragement, his son now ties his own shoes, takes showers regularly and I’ve even taught him how to cook basic mac and cheese and other dishes.

I persuaded my boyfriend to send his son to a special-needs school when the boy was entering high school. He did, and his son is now blossoming. The son is finally learning to read. He has friends and even went to the prom. I taught him how to slow dance. His son and I get along very well. My boyfriend has told me he’s never heard his son laugh as much as he does around me.

The issue is my boyfriend doesn’t work with his son. He expects the school or me to be the teachers. He is very passive and overly spoils his son by letting him lay around and buying him things. His son has no chores and is allowed to be very lazy. I have stayed there many weekends watching his son wear the same pajamas and play on the computer from Friday night until Sunday night only stopping to eat and sleep.

Now that my last child has graduated college, and all my kids are out on their own, my boyfriend wants me to move in with him and his son.

I am afraid if I do this, I will be solely responsible for raising his son. Not financially because my boyfriend is very well off. I raised my own children as a single parent and don’t want to take on the responsibility of doing it again, especially with a special-needs child whose father is overly complacent.

My biggest concern is that I know my boyfriend will continue to over compensate for his son for whom he has zero expectation. I believe it will all fall on my shoulders. He is in his 60s and I’m afraid it’s too late for him to change. He once told me he wants someone to take over raising his son.

I am in a good stage in my life. I love this man and enjoy our time together, which is mostly a party of three with his son always with us. We spend every weekend together and sometimes have a week-night date. I don’t feel the need to get married. Living apart and dating (a LAT relationship) is enough for me right now.

He is questioning our future because I’ve expressed my concerns about moving-in together and me going back in time to raise another child. His son will be living with him for many more years or maybe even forever. I don’t want to sound selfish, but I feel he is being selfish expecting me to fast forward and take on this role which he has been passive in.

Is it crazy for me to believe at our age we can just keep dating and live separately? It’s been working for us. I believe this is all surfacing because I am now an empty nester; an empty nester looking for advice.”

Tom’s comments: For Terri’s situation, I turned to my partner Greta–a special-education teacher for 31 years—for advice. Greta advised Terri to have the boyfriend get outside help for the son. There are many programs that could help him. Terri should not take the burden on herself.

Not all relationships where adult children are in the mix have problems. Look at these happy moms and their children. 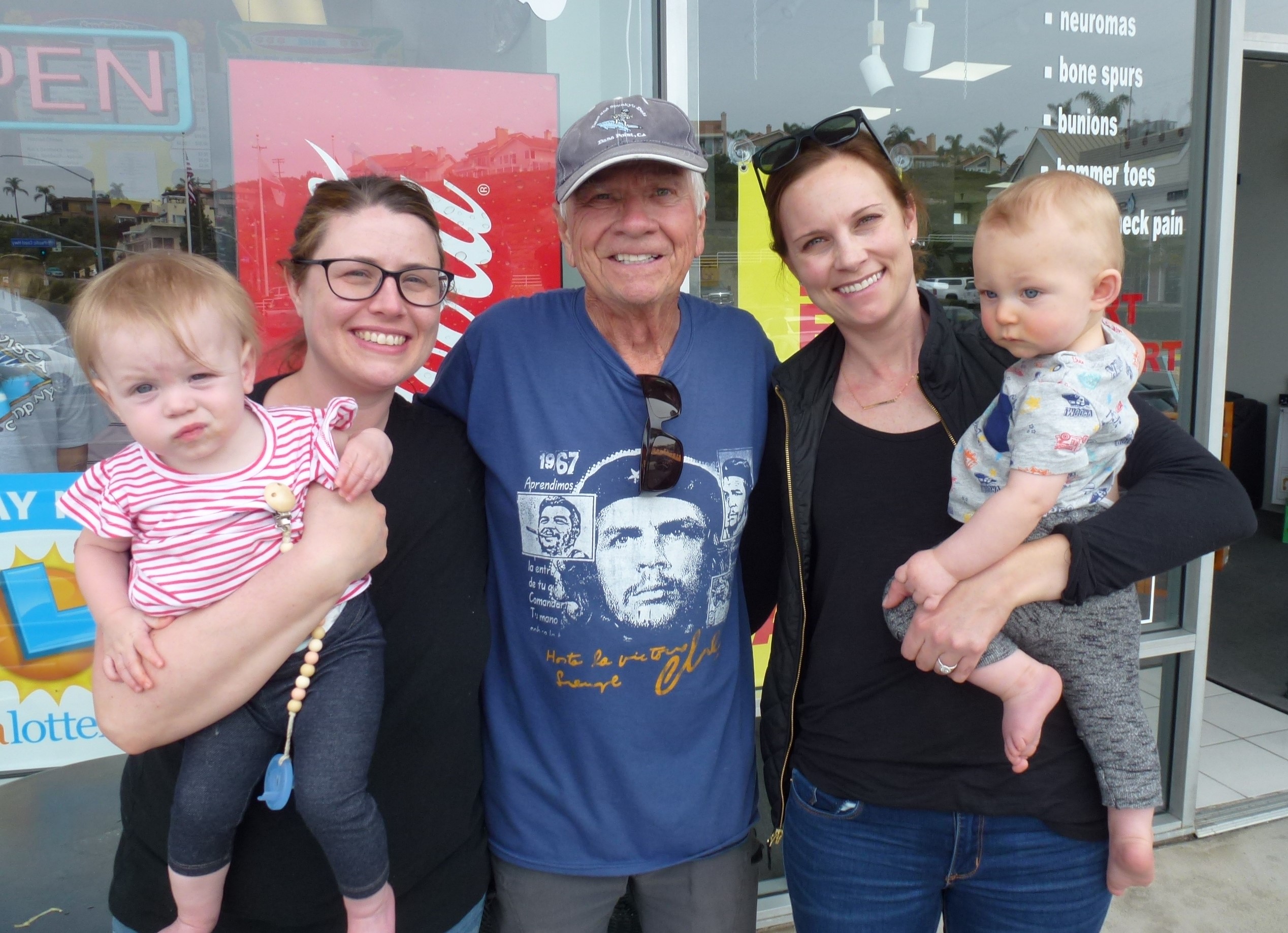 Photo by Tom: Tom and two of his former deli employees–Kelly O and Kelly D–with their children. The employees of Tutor and Spunky’s were one big happy family (most of the time).

I have no children. Greta has four children, eight grandchildren, and three great grandchildren. I have been fortunate. I have always felt complete support from her offspring about our relationship. And now that we are older, her children have personally expressed appreciation to me for watching out for their mom.

And while Greta and I share expenses, we have kept our assets separate. Perhaps that’s one reason her family hasn’t been concerned about our relationship, their inheritance has never been an issue with them. They only care about their mom’s happiness and well-being. I’m a lucky guy.

On my website, there are 12 articles I have previously written about how adult children can affect a relationship. Likely, Diane’s story will become number 13 and this story number 14. You can read those articles by following this link.