I’ve been to Disneyland twice in my life. I recall the first visit vividly, June 21, 1964, not because of the intrigue of the Magic Kingdom, but because while waiting in line there, I heard that Philadelphia Phillies’ pitcher Jim Bunning had pitched a no-hitter, perfect game, against the New York Mets.

Why do I remember that? I was a Detroit Tigers fan and Bunning had been a Tigers pitcher, where he also had pitched a no-hitter, and I was upset when he got traded away.

The second time was about 15 years ago when my partner Greta and I took her grandchildren for a fun day there.

Greta and I decided to go to Disneyland on February 4. You might be thinking, “Tom and Greta must not have realized that Disneyland was closed due to the pandemic.” Oh, we knew it was closed, which is why we went. Disneyland is the primary COVID-19 vaccination site in Orange County, California.

Where we live in Orange County, the nation’s fourth-largest county with more than three million people, the primary way to schedule a vaccination appointment is the website Othena.com. Greta and I had been on that site for five weeks trying to schedule an appointment. It was frustrating being put in a “waiting room,” as the site described it, without being able to get an appointment, but when you consider 610,000 people are registered on that site, also awaiting an appointment, the delay was understandable.

On Tuesday, February 2, we were each notified by email that it was time to book our appointments. We were able to both get the same day, time and location. It was Disneyland, for the Pfizer vaccine. We were told to bring a photo i.d. and a printed copy of our appointment confirmations.

People who go without appointments will be turned away.

Our appointment was for 9:30 on Thursday the 4th; we arrived at the main entrance to the enormous parking lot on Katella Avenue in Anaheim and were parked by 8:30 a.m. The people directing traffic were very helpful and friendly. Reminders to wear masks were everywhere.

In our eagerness to get in line, I did not write down the row where we parked. I just eye-balled our location among the hundreds of cars parked there and thought “No sweat. I know where it is.”

We were directed to get into the 9:30 a.m. line. Crashing an earlier line than one’s scheduled appointment isn’t allowed. Hence, arriving early, won’t get a person vaccinated earlier.

There was one woman ahead of us. It was cold and slightly windy. I was wearing a winter jacket. Greta had only a shawl over her blouse. It was cold for her; I opened my winter coat, hugging her and wrapping the coat around her to warm her up. I saw many men in teeshirts, shorts, and flip-flops with no socks. They had to be uncomfortably cold.

We watched as 100+ people in the 8:45 a.m. line advanced to the vaccination tents. And then the same for the 9:00 and 9:15 lines. As each line cleared, people waiting in the remaining lines cheered.

We passed through three check-in stations, showing our picture i.d and appointment documents each time. A fourth station was where we received our shots and a vaccination record card that also listed a February 25 appointment for our second dose. 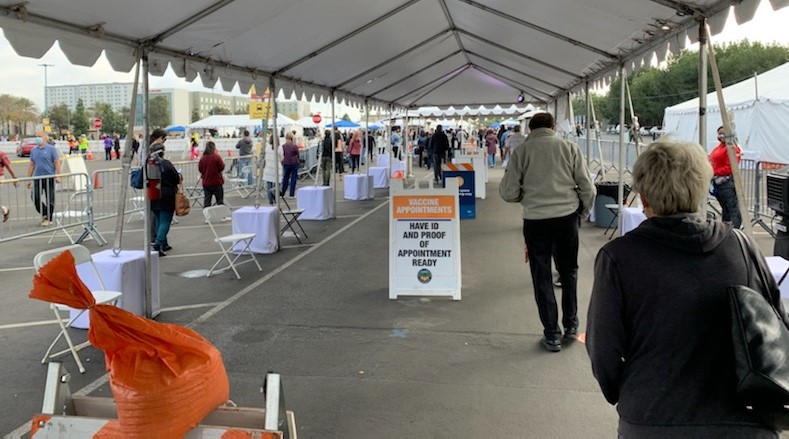 Before receiving the shot, everybody was questioned about the medications they’re taking. If any meds might possibly interact with the vaccine, those people were interviewed in yet another tent by a doctor to receive approval.

Greta and I felt the shot hurt less than a flu shot. After receiving it, we were required to sit for 15 minutes under a tent to ensure we had no adverse reactions.

While there, we discovered that Greta’s driver’s license (photo i.d.) was missing. Couldn’t find it anywhere in her pockets or purse. We mentioned that to a staff member and before we knew it, Mike Lyster, the Chief Communications Officer from the Anaheim City Manager’s office–who was helping out that day–was summoned and helped us retrace our steps. He was awesome.

After a frantic search, a triple-check of Greta’s purse revealed that her driver’s license had slipped behind another card. We embarrassingly revealed that to Mike.

He smiled and said, “You’d be amazed how often that happens. People show their paperwork so many times it’s easy to misplace something small such as a driver’s license.”

We made our way back to the car. Of course, it was hard to find because I hadn’t written down where we parked. I kept making excuses to Greta like, “My car usually has my Stand Up Paddle Board on top so it’s easy to see. But I removed it this morning before driving here.”

Our first-dose experience was positive. The people working there were incredible. We thanked them often. Hopefully, all Champs will do the same with all of the medical and service personnel who are putting themselves at risk to help us get through the pandemic.

Other than sore arms the following day, neither of us had any side effects.

Although we didn’t see Mickey or Minnie Mouse, and our outing wasn’t exactly a celebration of Valentine’s month, it had been pleasant to be there. Hopefully, by summertime, those two Disney characters will be walking the streets of Disneyland, greeting customers.

In Dana Point, where we live, there is a house on the Street of Blue Lantern (many Dana Point Streets are called Lanterns) that is decorated by its owners for every special holiday. Valentine’s Day is no exception. 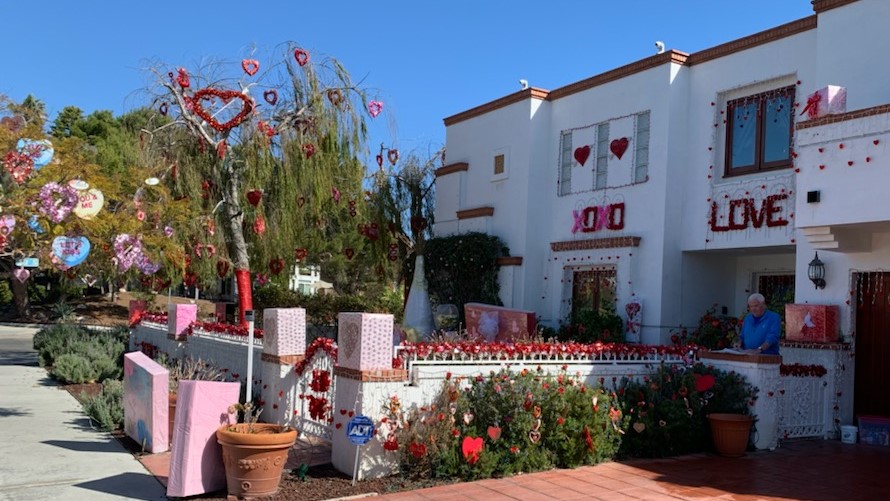 Have a good Valentine’s Day.