Goofy Together and Loving It. Finding love in their 60s because of a logo on a hat

During 26 years of writing about finding love after 50, readers and Champs have shared multiple romance success stories with me. I love hearing them.

In 2009, I included the stories of 50 couples—many of them Champs–in a book titled, “How 50 Couples Found Love After 50.” There are eight bonus stories in the book-so 58 couples are included.

As I hear more success stories these days, I’m wondering if a book titled, “How 65 couples found love after 65” should be written. The above book is available at https://www.findingloveafter50.com/tomblakebookstore or e-mail me at tompblake@gmail for a reduced rate.

The latest success story arrived this week. Heather, 67, a Dana Point, California woman emailed: “Love your articles and I’m so happy you have a gal that makes you happy. I wanted to share my story.”

Heather wrote, “My husband died in his sleep, May 2016, while we were celebrating our daughter’s 30th birthday on Oahu. It was horrible.

“Many people told me, look out, you are fit, funny, you cook, you are independent; men will seek you out. It was the last thing in the world I was thinking about. I had a pile of work to get through let alone the slowness of Hawaii for the death certificate and autopsy for my children.”

In January 2017, Heather and some women friends were enjoying themselves at the “Swallows Inn,” a popular country music bar with a dance floor in historic San Juan Capistrano, which is near Dana Point and San Clemente.

Heather said, “I was sitting by myself as they were chatting it up and then they hollered over, ‘Heather come here.’ I was smitten when I met Reuben.

“It took until March that he wanted my phone number. Our first date was on April Fool’s Day. We were the couple in the corner acting goofy. We went to Stillwater (a bar in Dana Point) and everyone wanted to be our friend.

“We are a biracial couple; I think my very tan skin and his beautiful black skin were an attraction to people. Also, we are both very friendly and accepting. He is the love of my life and partner.

Reuben and Heather at California Adventure. Notice his hat and shoes

“Within the five languages of love, Reuben, 62, is the Act of Service. He can fix anything in my home. I love to cook and bake for him and keep a clean home. I work out five days a week and he does too. We are fit, healthy, goofy together and we love it.

“I retired in June 2017 after 44 years in residential lending. Went to work at Trader Joe’s in Crystal Cove as I could not stop, cold turkey, from work. Such a fun place to work! Saw multiple celebrities. After 11 months and missing out on birthday parties for little ones.

“In 2018, Reuben moved in with me when his roommates disbanded. He was slowly bringing tools over and we were together all the time. Just made sense.

“Everywhere we go, Reuben has a Chicago Bears or Michigan cap and/or mask on. Always starts a chat.

I love this story. I admit I am biased because I grew up in Jackson, Michigan, 30 miles from Battle Creek. Plus, I graduated from U of M and am a big University of Michigan fan.

There are two dating lessons in Heather’s and Reuben’s story.

Lesson One. Hats with logos are conversation starters for seniors–and ice breakers

Wearing a shirt, face mask, or hat with a college, pro sports name, or something fun on the brim, is a good idea for singles who’d like to meet a mate. Those are conversation starters, ice breakers which is why those Battle Creek women approached Reuben, which led to this love story.

Greta and I observed this when we were on our traditional New Year’s day walk at Salt Creek Beach. I saw people wearing Alabama shirts/hats and Notre Dame shirts/hats and said to the people “Good luck today in the game.” (Alabama was playing Notre Dame in the college football playoffs). Some of them wanted to stop and talk about the game. (Later, the Notre Dame fans didn’t want to. Alabama won big.)

When Michigan fans and Ohio State fans see each with logos, they tease the heck out of each other. Still, that’s a conversation starter.

I have two maize and blue “M” face masks, several “M” golf shirts, a hat, and a pair of Go Blue Michigan shoes. (Greta’s daughter Terry has given me all my UM stuff as gifts. I think, singlehandedly, she has kept them in business).

Tom decked out – down to the UM shoes

If you don’t have a hat with an ice-breaker logo, and if you live in South Orange County California, on Saturdays, go to the Dana Point Farmer’s market and check out Champs Vince and Julie’s booth. They are the “logo hat specialists.”

Our Champs Vince and Julie in their Dana Point Farmers Market booth with a variety of hats. Talk sports with Vince–he’s very knowledgeable

A hat that I cherish from their booth: an old VW bus on the brim. Everyone needs a hat with a logo on it. 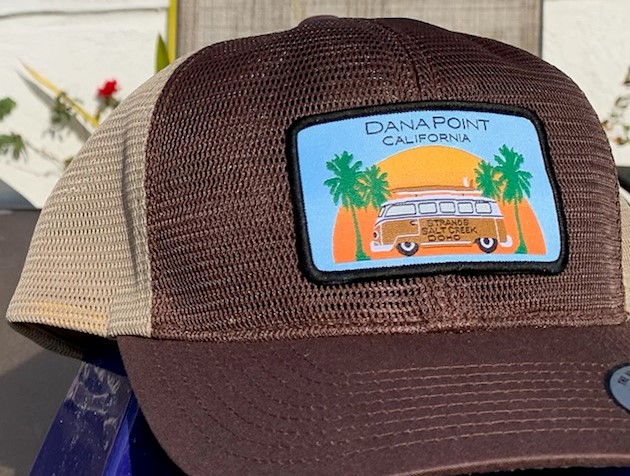 And lesson two: Hey guys, to win her over, slowly bring your handy-man tools when you are doing maintenance on her home. Leave them there. Soon, you’ll have so many tools there that she’ll have no choice but to invite you to move in.