Part One – Responses to: “I won’t settle”

Part 2 – What two Champs are doing during COVID-19

Part One – Responses to: “I won’t settle”

Last week, we wrote about Stacy, who, in four years, has settled for a man’s indifference towards her. She asked for advice. Comments from 10 women, some who’ve had similar experiences, follow:

“This is a classic case of a woman hearing what she wants to hear. She has allowed herself to be manipulated into a ‘friends-with-benefits’ situation. The only time the man has ‘integrity’ is when he states that he doesn’t want to get married. Maya Angelou said, ‘When people tell you who they are, believe them the first time.’

“This lady should immediately get a paperback copy of He’s just not that into you, a landmark relationship guide.

“This woman is a sitting duck for the scam artists that patrol online sites. They are experts in telling women what they want to hear. If this lady only lost four years, she got off easy. It could have been a lot worse.

“She should not even bother to tell the man goodbye. Just get the book, a coach if necessary, and start her new life. The man is not the problem; she is her own worst enemy. If he contacts her, she should not bother to play the blame game, since she was an active participant. She should simply state that she decided to ‘Get a life!’

“I can state this advice bluntly because I have had these dysfunctional behaviors myself and have recovered.”

Joanie, “Stacy is desperate, and Bob is offering her crumbs. He does not want more than a friends-with-benefits relationship. She, on the other hand, seems to have a very tolerant attitude towards men and is willing to compromise. She should look for a better man.

“Bob is continuing to look for ‘Mrs. Right,’ and he does it in front of her eyes. Stacy’s great challenge is the fear of being alone.

Shelley, “Stacy is settling; she wants to matter to this man, but he isn’t making her a priority.

“If a relationship is not reciprocal, it’s not equal. Stacy should date other men and take a ‘break’ from Bob. Keeping quiet out of fear of rocking-the-boat never works in the long run.

“Bob’s actions don’t demonstrate love. She is not respecting herself.

Susan, “Stacy seems to have visualized that this man is perfectly suited for her but is ignoring the red flags. A person needs to either accept who someone is or end the relationship.

“Yes, it is very hard to let go of the good parts of the relationship but as long as there are parts that don’t work and those parts cannot be accepted with peace and grace, the relationship will never work. Maybe that is what her man sees, but since he is in control, it does not bother him.”

Barb, “Stacy’s situation hit pretty close to home! I have been in a relationship with a guy for eight years. We are very compatible. He is just a GREAT guy, was such a hard worker (just retired), willing to help others. He’s been married and divorced three times, bad marriages, not looking to remarry!

“He’s always telling me how wonderful I am, beautiful, honest, and it’s quiet when I’m not there, etc., but he just moved 1600 miles away. I just returned from spending almost a month there; I’m hoping he will realize what he is missing!

“I will be moving too. Where?? not sure, just out of here. Can’t handle this Arizona heat and take care of my place without his help. Life is what you make it…in a sense, but it is better with someone you love!!

“Reading Stacy’s letter was particularly painful. I have been where she is. Why is it so much easier to see it in someone else?”

Sylvia, “I understand, Stacy, that you want the relationship so much you’re willing to delude yourself into thinking it will change, it will be different, he’ll figure it out eventually. He won’t.

“What he will do is meet someone else and move on while you’re left wondering what you did wrong. What you did was not value yourself. You’re so grateful that he is spending some time with you that you’re willing to overlook important signs. When he is gone, you will have wasted over four years. You can’t ‘fix’ him, you can only fix you.

Value yourself. Don’t settle. Find someone who appreciates you, but you must appreciate yourself first.

“I’d rather be alone than spend time with someone who makes me feel insecure and unsure of myself.”

Jackie, Georgia: “OMG! Is there a book- ‘I Stayed Tooo Long?’ If not, there should be. My heart hurts when ladies settle!

“I had someone pop into my FB about a month ago that showed interest who now lives in Texas but grew up in Michigan close to my home. He was a retired Chaplin and did a lot of spiritual outreach. We had many things in common.

“It didn’t take long for him to sign his notes with hugs and kisses. There was a silent time that I didn’t hear from him, so I showed concern he may have gotten the virus. He said, no, he had broken up with a lady and felt depressed.

“But he told me I was number-one now (what a joke)! He would say how he went to sleep with his ‘Jackie’ pillow. But when he sent me some red-hot lips, I asked him if he was wearing lipstick and mentioned I was interested in someone knowing my heart not the lust of the flesh!

“He blocked me and I haven’t heard from him since! I’m doing a happy dance!

“It’s been nine years since I divorced after 42 years (talk about staying tooo long) and now over three years that Randy, my second husband, passed away.

“I’m trusting in God to be the lamp unto my feet and a light unto my path. He led me to Randy and He can do it again without my chasing to look for someone who may not be right. However, I’m not sitting in a chair waiting!

Kaitte, “I don’t think she wants to hear it but if a guy broke it off with me the FIRST time, I would have said that’s it. What’s That old saying? Fool me once, shame on you. Fool me twice shame on me–because I let it happen again.

“I would rather be in the single, no-drama state I’ve been in for these 20 years than wonder if someone is screwing me over.”

Leslie, “Stacey says she’s never been as happy. She doesn’t sound happy to me. My bet is if she did as you suggested, she’d find someone who appreciates her.

“Bob sounds like guys I’ve known, so many women out there, he’s playing the victim from a previous marriage as an excuse because he knows he ‘has’ Stacey while he plays around.

“Well, Stacey, there are lots of men out there too. I’ve stayed in relationships too long, also. Out of fear. Wasted lots of time.

“I wish Stacey the courage and the knowing there are men out there who will love her, tell her so, and make a lifelong commitment.”

Diane, 59, shared: I was married 20 years. A year after my divorce, I met Lewis and spent 10 years with him on and off. In year four, his son moved in with him. He gave his son everything the son wanted.

“I should have left him then, but I loved him and thought I could change him. I ended the relationship after 10 years by moving out of state, so that I would not have the urge to contact him, or run into him, or see him again. Tried online dating three times–not for me.

“I’ve learned that I am the only person that can make me happy.”

Part 2 – What two Champs are doing during the virus

Last weekend, I visited Vince and Julie, who are Champs that have a booth at the Dana Point Farmer’s Market on Saturdays. They sell hats and other forms of merchandise with all sorts of different logos. 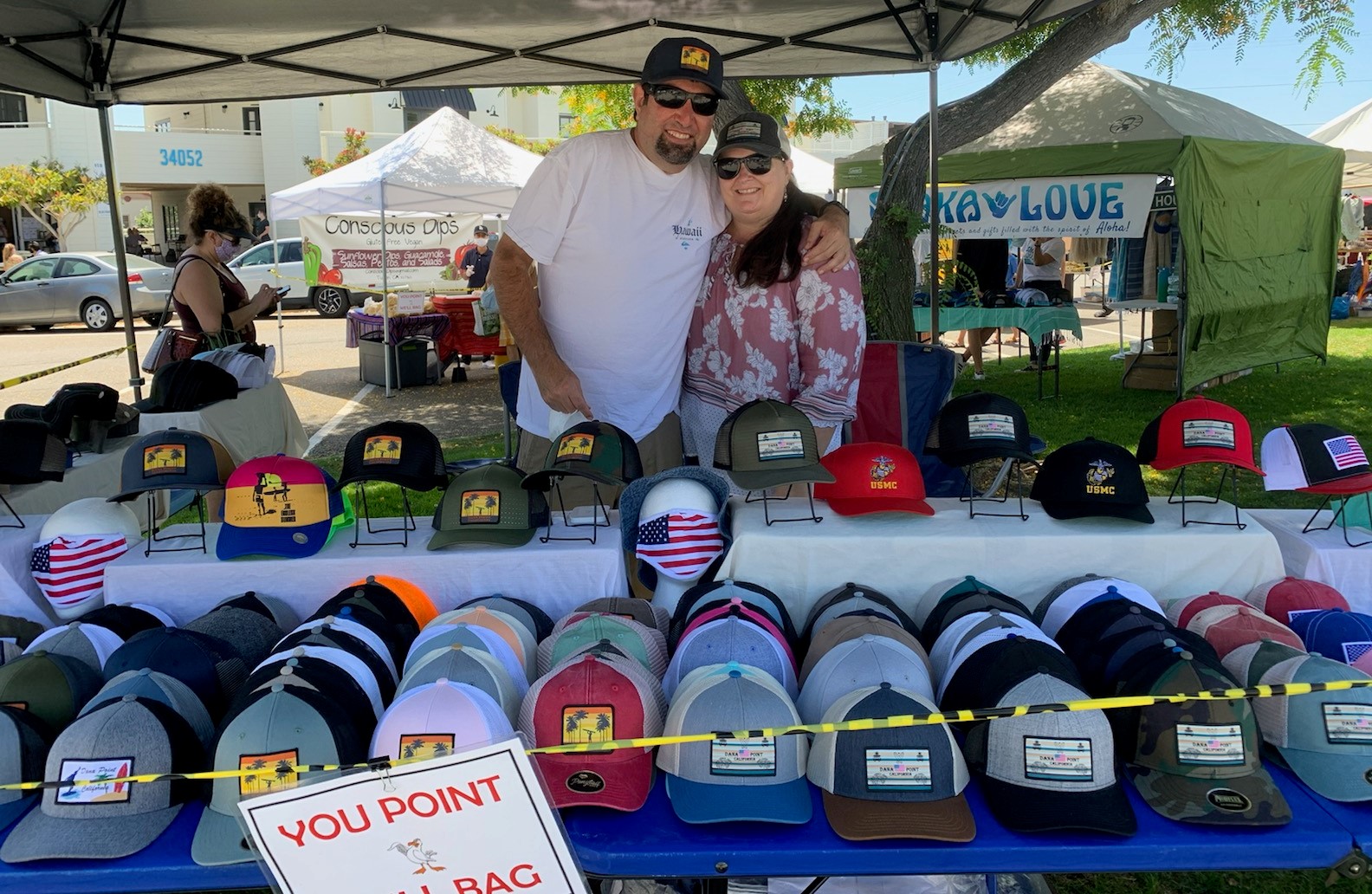 I’ve known Vince for 27 years when he was a tennis pro and later the manager of the Ritz Carlton Hotel Gift Shop. I asked him about possibly having some hats made with a “Tom’s Champs” logo, which I’m thinking of creating.

Vince gave me his business card to check out their company’s website. Oh my gosh, I had no idea his company does personalized logos, hats, clothing, and patches that can be pasted or sewn on to garments. They prepare items for people all over the USA, not just Dana Point.

There are actually three Champs living in Vince’s and Julie’s home. Julie’s Mom, Dee, a longtime Champ, lives with them. They are wonderful, helpful people and very talented. Their contact information is on the website. Check out the website at the end of today’s article; you might find something you’d like.

News came in this week that made Greta and I realize how fortunate we are. It had nothing to do with the virus. Nonetheless, it shook us up.

On May 25, 1999, my nephew Derek, who lived in Dallas, was able to get tickets to the Fifth Annual Blockbuster Entertainment Awards at the Shrine Auditorium in Los Angeles. He invited Greta and I to attend, along with his friends, Jim and Marci Kalina, who lived in nearby Laguna Niguel. The Kalinas never did anything second class, so they hired a limo for six of us to transport us to and from Los Angeles. Derek also got us tickets to a VIP Post Party.

And Derek somehow got us into an even more private special VIP party that was in an upstairs room for the entertainers. We met the members of NSYNC; I recall having a nice conversation with Lance Bass.

When Greta spotted a place to sit on a couch next to John Travolta and his wife Kelly Preston, she sat down. Kelly was 36 at the time. Greta struck up a friendly conversation with the Travolta’s and I took this photo. 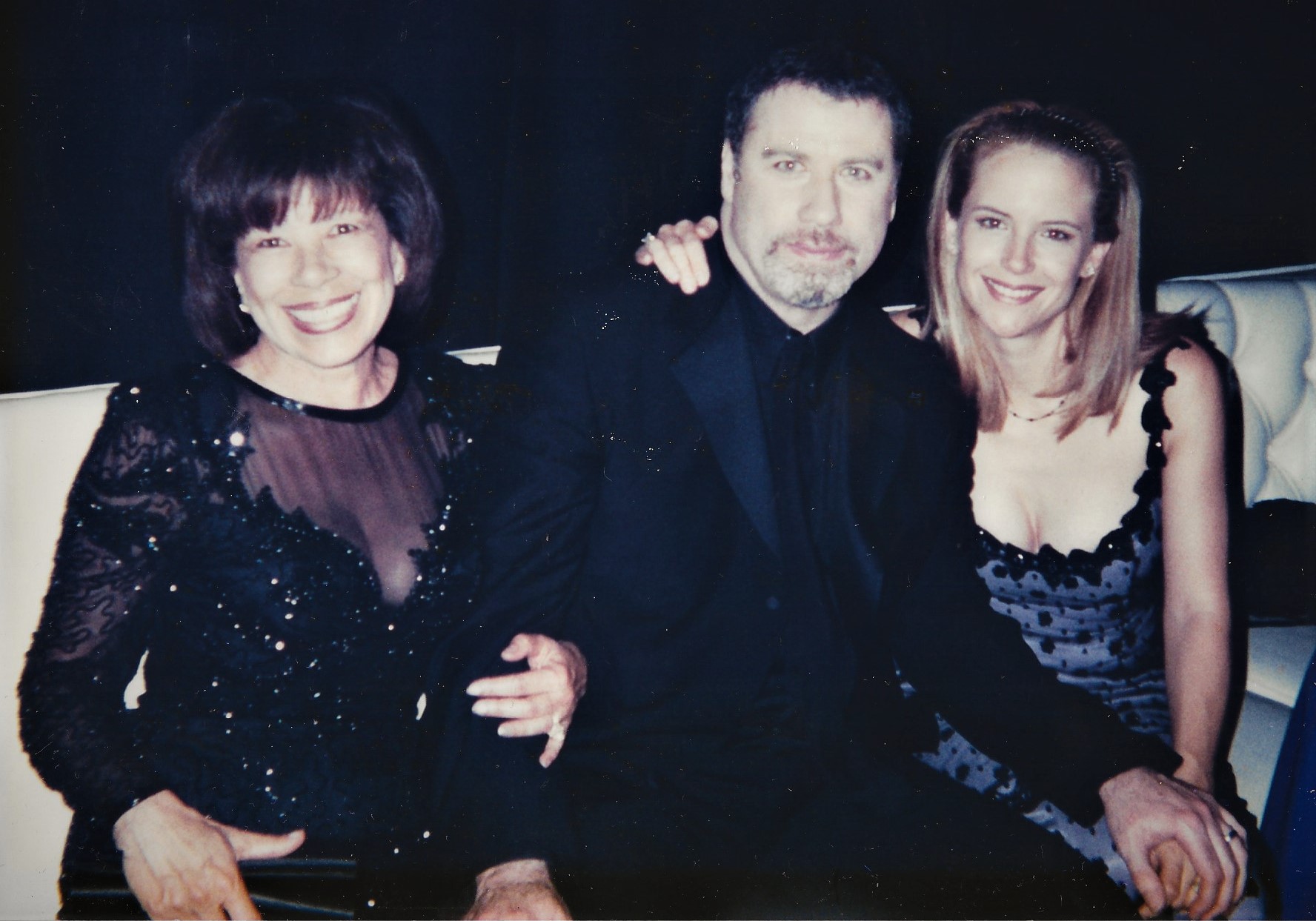 This week, Kelly Preston passed away at 57, from breast cancer. Greta and I were stunned. Having met her, it just didn’t seem right that she passed so early. We feel bad for John and the family. They’ve had tough sledding in their lives—a son, age 16, named Jett, passed away in 2009.

Greta and I feel blessed that we’ve been able to enjoy our lives for so long.