My 2019 Holidays eNewsletter is a tribute to people who were important to Champs, who passed away this year. Two world events in the last week triggered this thought. Both are coincidentally related to New Zealand.

Why this unusual topic? The idea came to me this week while Stand-Up Paddle Boarding in Dana Point Harbor. I was paddling with my usual paddling buddy, Russell Kerr, a native of New Zealand. Russell and his wife, Pam, have dual New Zealand/USA citizenship. He and I talk about events of the world whenever we are on the water together.

The first event Russell reflected upon was the White Island volcano eruption off the coast of New Zealand on December 9, in which 18 people perished.

I couldn’t help but think of the friends and relatives of those who died that have been affected by this tragic event.

And the second world event that Russell and I discussed occurred on December 12, with the passing away of Peter Snell, New Zealand’s greatest athlete ever, a middle-distance runner, who would have been 81 on December 17.

Why did Snell’s passing affect me?

In the summer of 1960, I traveled in Europe with four friends. We spent several days at the Rome 1960 summer Olympic games. On Friday, September 2, 1960, we watched in Olympic Stadium Peter Snell win the 800 meters run in track. It was the first time in 24 years a New Zealand runner had won an Olympic track and field gold medal.

I was a college cross country runner at the time and admired the grit Snell had shown in that race. Snell broke five world track records in his career. In the 1964 Olympics, he won both the 800 meters and the 1500 events.

Fast forward to 2011, when my partner Greta and I were on a cruise around New Zealand’s North and South Islands. One of the ports where the ship docked was Wellington, located at the southern tip of the North Island.

On our way back to the ship after a fun sightseeing day, we popped into a shop called the Olympic Games Museum. I was curious to see if Peter Snell was featured there. Did anyone in New Zealand even remember Peter Snell?

Inside, there was a pair of worn-out track shoes on a podium under glass. I asked a man working there if they were Peter Snell’s shoes. (They weren’t).

The man judged from my accent that I was from the United States. “Why is an American interested in Peter Snell?” he asked. I told him about being in Rome and seeing Snell win the gold. I mentioned I had admired Snell ever since.

The man’s name was Terry Daly, the Commercial and Marketing Director for the New Zealand Olympic Committee. He gave me an official New Zealand Olympic team lapel pin and told me he wanted to give me something else, but it was in his office in Auckland. I told him our ship would be there in two days. He gave me his card and asked me to come by.

After sightseeing in Auckland, Greta reminded me that we needed to go to Terry Daly’s office.

Terry gave us an Olympic team jersey autographed by the great Peter Snell. I was incredibly moved and honored.

Snell’s jersey hung on the sports wall of fame at Tutor and Spunky’s Deli, my Dana Point deli, from 2011 until I sold the deli, in 2015. Since then, it’s been on the wall in our garage.

When Peter Snell passed away this week, I went to my garage and took down the framed jersey to photograph it. I felt a heart-string tug. 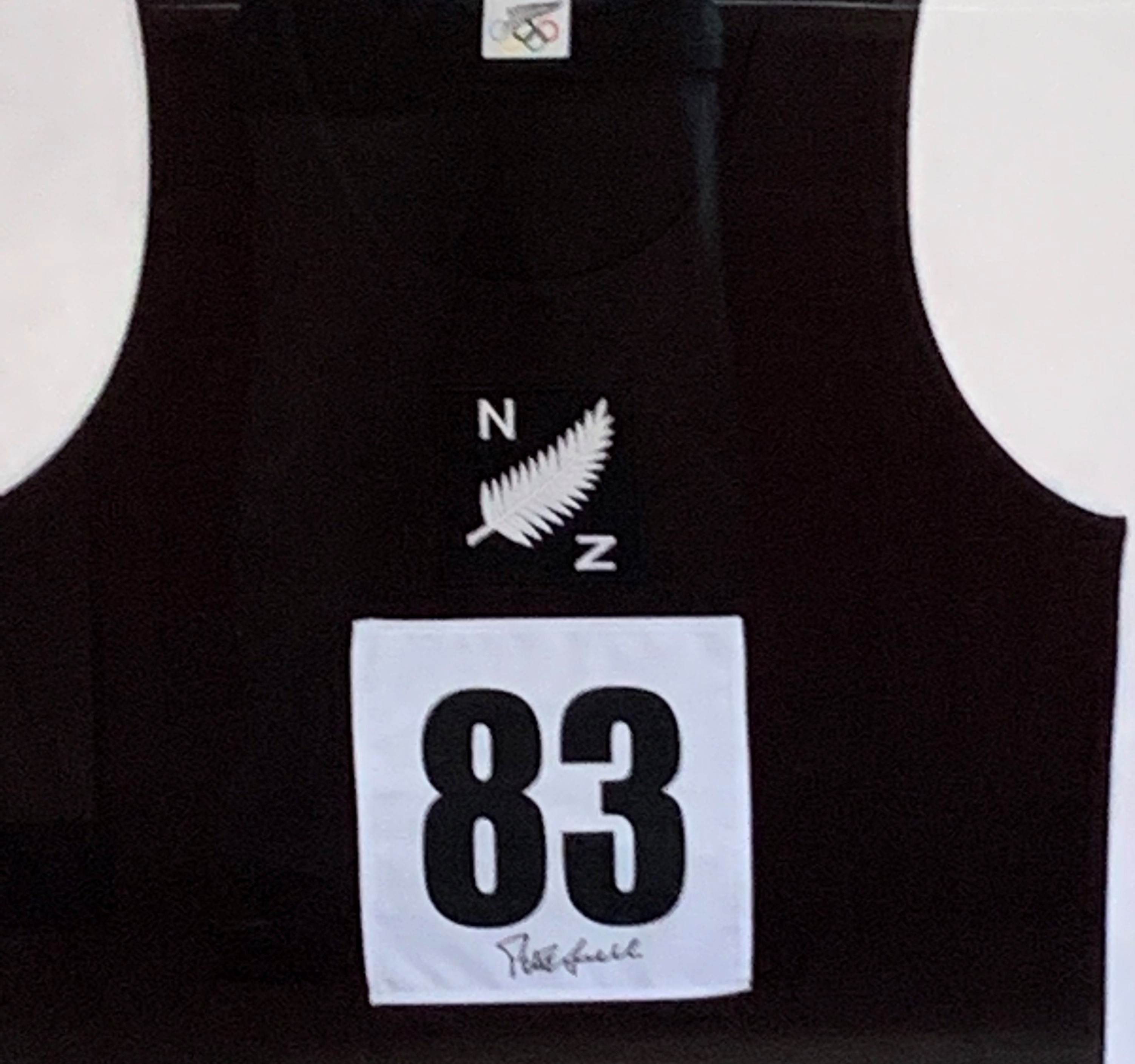 I took several minutes to ponder Peter Snell’s life, and how humble he was, and my life, and how fortunate I was to have seen him run, although I never met him. But my brother Bill did. Snell became a dentist in Dallas, where my brother lives. Their paths crossed one time. Snell passed away in Dallas.

So, to Peter Snell, and the people lost in that tragic White Island volcano, and my Dana Point deli customer, Vern McGarry, and my high school buddy Champ Carm, whose sweetheart Karen Jenkins passed away this year, and all the others, who have passed this year, or in all years, in fact, thank you for being in my life and/or the lives of our Champs.

Merry Christmas. Happy Hanukkah. May 2020 be a good year for all of us.