Widow Happy in Brooklyn not dating

Champ Michele wrote, “I enjoy reading the On Life and Love after 50 eNewsletter on dating, but I don’t participate much because I live in Brooklyn, NY. I have been widowed for 18 years (at age 49) and still miss my husband. I tried online dating but almost got scammed my first time. The few people that contacted me were beyond bizarre. I gave up on that.

“I have been to some dances, but the men seemed to ask the women to dance who were dressed very provocatively and that’s not me. I would leave the dances saying what is wrong with me. It was depressing. No one seems to know anyone. So, I gave up on that.

“Most single functions end up with the women far outnumbering the men. So, if a man, by some remote chance, asks you to dance, he acts like you should be so grateful that he chose you to ask over these other women. It’s like a meat market.

“I enjoy being with my friends and going on vacation. My attitude is, as my mom used to say, ‘If it’s meant to be it will be.’”

My answer to Michele

I’ve been writing about age 50-plus dating for 26 years, since 1994. My first few years’ articles focused on the challenges of dating later in life for both men and women. At that time, the ratio of single women to single men in their early 50s was approximately one-to-one.

As the years passed, that ratio slowly changed. More and more women contacted me, asking “Where are the men?” The single women to single men ratio drew closer to two-to-one for mid-60s people.

Men rarely wrote me. Either they had found somebody or became too inactive to participate in the dating game. Some men, me included, were still looking for a mate.

Some women said the ratio gap was even larger because many single senior men aren’t relationship material. I could see that finding a potential mate was becoming more difficult for women because fewer desirable men were available. But, good guys were and are still out there.

I remember the Dr. Ruth Westheimer response to a woman at an AARP convention who asked her, “Where are the men?” Dr. Ruth said, “The ratio is a fact of life. But, if you have a nice appearance and a positive attitude, and are willing to get out and socialize, you can effectively shrink that ratio.”

And then another phenomenon happened: A thing called the Internet emerged and online dating got its wake-up call. Women were drawn to it because they could reach out beyond their city and local boundaries to find men. A Brooklyn woman, such as Michele, could reach out to all the boroughs of New York City, which are nearby. Potential mates could meet without driving, by using the subways. 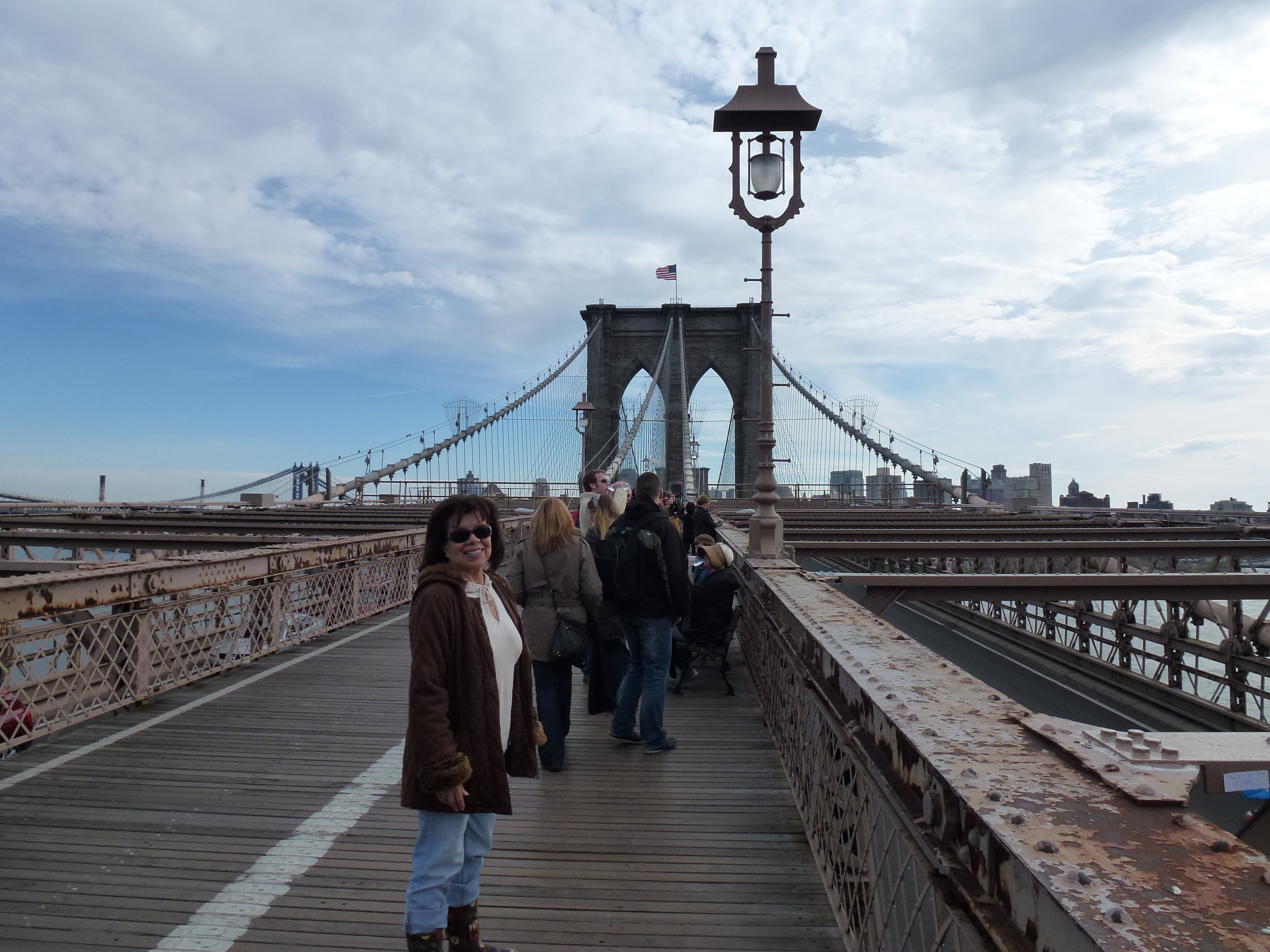 My partner Greta walking the Brooklyn Bridge, from the Manhattan side

It didn’t take long for senior romance scammers to figure out that lots of women online were lonely and vulnerable, especially widows. The romance scammers saw a fertile environment in which to rip off women.

Granted, lots of couples were formed as a result of the Internet but senior romance scams also bloomed. We try to educate the women about the scams.

Now, we find ourselves in our 60s, 70s, 80s and even 90s. That ratio has reached almost four-to-one by age 75. Women, such as Michele, share their stories of the lack of men at singles functions. Greta and I see it at our monthly Meet and Greet gatherings in Dana Point.

Saturday night, Greta and I were at the Greek Festival in nearby San Juan Capistrano. One of our woman Champs saw us and introduced herself. She even made the comment about the lack of single men at singles events. I found myself trying to explain the shortage of men to her, as I am to Michele today.

So, what can I say to Michele, who is “Happy in Brooklyn” spending time with her friends and traveling. She has given up on internet dating, singles dances, and singles functions. She is accepting her mom’s advice: “If it’s meant to be, it will be.”

Michele, I say, don’t give up on Senior Romance, keep your eyes open for opportunities to meet a potential mate.

Be assertive, not aggressive. By that I mean if you see a man when you are out and about, and he appeals to you (age close to yours, no wedding ring, no soup on his shirt, combed hair, no odor, no spinach in his teeth), make a friendly comment, such as: “Nice jacket, nice car, nice dog, what’s the dog’s name? Where do you buy your spinach?”

In the Post office, “Boy, these lines are long?”

On a cruise ship: “Where’s the dining room?”

At the California DMV (Department of Motor Vehicles): “How many hours have you been here?”

Anything spontaneous. He may be hoping to meet someone but he’s shy. Be ready to pop the question: “Want to have coffee?” Be ready to pay for the coffee (his and yours). If he’s worth his salt, he’ll offer at the least to go Dutch. Better yet, he’ll offer to pay the tab. If this makes you feel uncomfortable, at least smile and/or even wink. Have a positive attitude.

That’s where we are now, 26 years later.

I hope Michele doesn’t give up on Internet dating but if she does, I understand. Traveling by subway to meet blind dates would be scary now. But local New Yorkers could travel by subway to Brooklyn to see her. As I recall Brooklyn Heights has some nice cafes

There are so many Internet dating sites online I can’t believe it. Everyday, there is a new advertisement in my email inbox. I can’t imagine the ratios are any better on those sites when compared to singles functions.

Continue to get out and enjoy life and your women friends as best you can. But above all, don’t give up on Senior Romance. You are still a young pup and deserve happiness.