Senior travel: Is this a cruise singles would enjoy? And visiting Fiji

Champ Wayne asked, “Is the cruise you’re on one that singles would enjoy?”

My partner Greta and I are in the final two weeks of an 82-day cruise visiting the Pacific and Far East. We return to the port of Los Angeles on December 21. Our ship is the Holland America ship ms Amsterdam. I’ve thought about Wayne’s question often on this 82-day cruise that Greta and I are on. We are nearing the end with only two weeks remaining.

The first answer that comes to mind is: It depends what a single is hoping for when he or she signs up for the cruise. If the purpose is to meet a potential mate, I don’t think it’s the right cruise for that, although it could happen.

Why? On this cruise there are about 850 passengers. I’m estimating the average age of most passengers is 75. I’ve only seen a couple of singles under 50 on the trip. A few times per week, there is a “Singles & Solo Travelers Meet” event listed in the daily calendar, which is placed in each stateroom.

Greta and I attended one of those events, an afternoon gathering, and there were 22 women and eight men (besides us) who attended. That isn’t too bad of a ratio for senior singles events—about 3-to-one, women to men. The average age for that event was closer to 80.

But, from what we observed, we didn’t see any potential couples forming at that event. And, as women often say to me regarding singles events, some of the men were not relationship material.

Granted, couples may have met on this cruise that we don’t know about. But after 82 days, you develop a pretty good idea who is hanging out with whom, and we didn’t notice any newly formed couples.

We’ve met five or six couples, usually at dinner, who met on previous cruises and now travel together.

How about the cruise positives for a senior single who isn’t hoping to meet a mate on board? There are many:

True, if a cruise ship doesn’t have a single supplement, the cost for a single can be the same as for a couple, or double. That can be a huge drawback. To my knowledge, singles paid full fare on this cruise.

If singles want a little more singles-type action, there are other cruises that would be more suited to that. Plus, at 82 days, if you’re looking for love, you might take a considerably shorter cruise because once you’ve met everybody on this cruise, you will still have a lot of days with the same people left with no new prospects. That could be a bummer.

Part 2 – “Bula Bula” and “Fiji Time”: A description of the ship visiting Fiji

On Wednesday, the ship anchored at Port Denarau, which serves as the port for Nadi (pronounced nandy). When Greta and I got off the tender boat that brought us ashore, we didn’t have a plan for the day other than to visit the Garden of the Sleeping Giant, Fiji’s largest orchid collection. On the way there, we passed sugar cane fields near the Nadi International Airport. I took this photo through the front windshield of a truck carrying sugar cane. 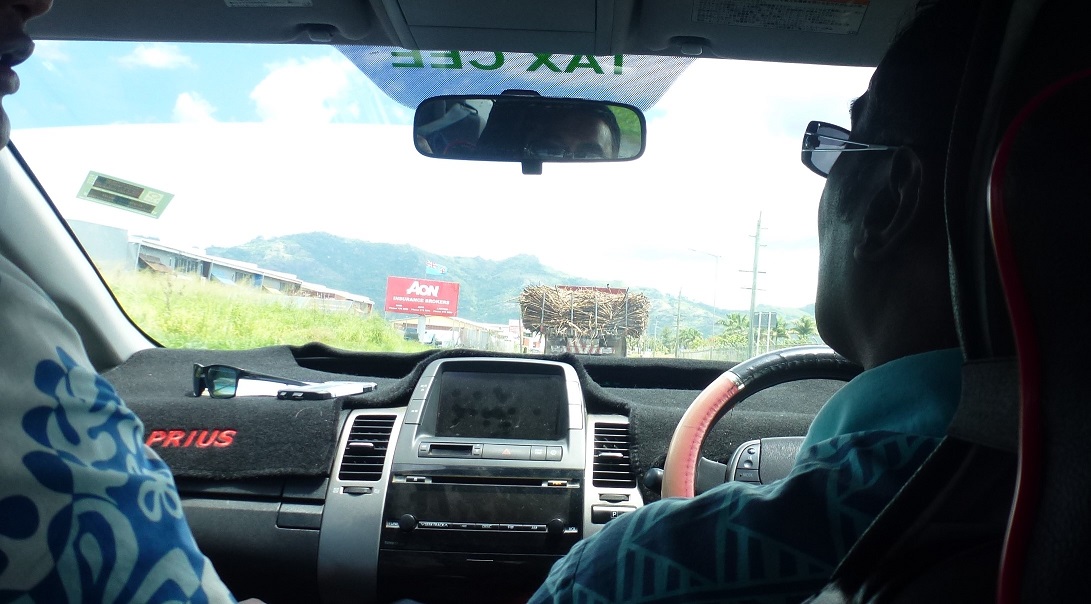 Sugar cane truck in front of our taxi

The garden was founded by actor Raymond Burr in 1977, who wanted a place to keep his own orchids. The garden was a 20-minute ride by vehicle from the port. We ended up hiring a guide with a taxi for a three-hour visit, including the garden plus some other highlights in Nadi.

When our taxi didn’t arrive at the scheduled time, our guide, Peter, explained to us the term “Fiji Time.” He said, Fiji is a relaxed, laid-back society. If something didn’t happen as scheduled, it was “no worries, life is good, we’ve still got the earth and sky, and beauty all around us.” As we passed the Nadi International Airport, I wondered if they operated on “Fiji Time,” but didn’t ask him.

I did, however, ask Peter if he played Rugby. I was only guessing, but at about 6’4”, 250 pounds, he looked like he could play the part. He was so big he could barely fit in the front passenger seat of the taxi. He smiled and said yes. Then, he proudly told us about Fiji winning its first Olympic gold medal in 2016, for its Ruby 7 (7 players) team. He said, “The government printed a special $7 bill to honor the team.”

I have a friend from New Zealand who is a rugby nut. Loves his New Zealand “All Blacks” rugby team. I said to Greta we’ve got to get one of those seven-dollar bills to tease him a bit. New Zealand and Rugby are big rugby rivals.

The second term we learned in Fiji was “Bula, Bula.” That means hello or good-bye or both. That was especially apparent to us in our second day in Fiji when we docked at Suva, the capital of Fiji, a five-minute walk to one of the largest fruit, vegetable and seafood markets we’ve seen in our lives.

From our stateroom on the ship, I counted at least 30 buses parked in the lot next to the market, and another 10 or more waiting on the street to come into the market lot until another would leave. People arrive by bus from all around the island to pick up their produce for home. From what I could see there is no rail system in Fiji, a sharp contrast to the major cities we had visited earlier in the trip. 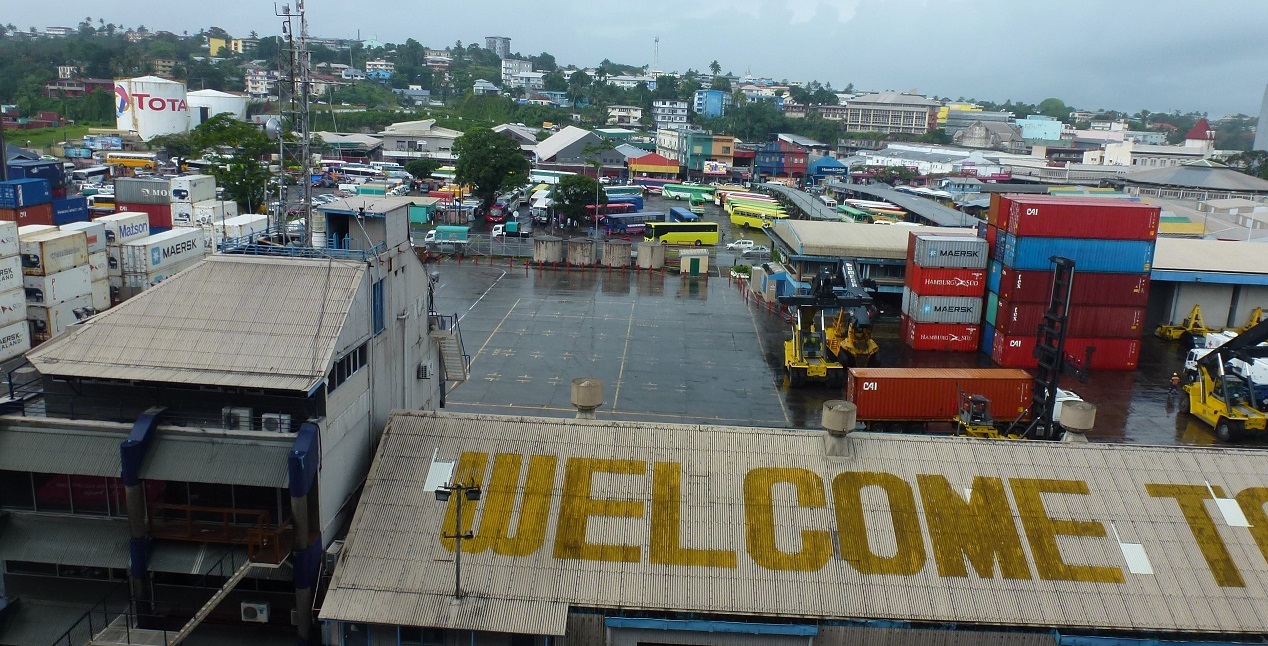 Everybody in Suva says “Bula” or “Bula Bula.” I mean everyone. And as we walked beyond the market to the heart of downtown Suva, the natives, probably recognizing us as foreigners, love to say Bula. I think Fiji is one of the friendliest countries we’ve ever been to.

And yes, in Suva, we went into a sporting goods store and asked if they had a $7 rugby bill. They did. I bought it. Cost me $5 USA. I’m gonna surprise my buddy with it.