Greta and I were in Palm Springs last week-end. On Saturday, the temperature was hovering around 106 degrees. It was a perfect day—to be inside in air conditioning.

Greta said, ”You’re invited on a senior daytime date. And what better place to be inside than a movie theater?”

Along with Greta’s brother Carl, and his wife Kathy, we went to the 3:10 p.m. movie, Mama Mia! Here We Go Again, the sequel to the earlier Mama Mia that had been released the same week, 10 years before.

I mentioned a month ago in the Book Club column that I’m not much of a movie-goer. But, since the Mama Mia! soundtrack was ABBA’s music, my favorite group of all time, I was game for the matinee.

I have loved ABBA’s music since I first heard of it in 1974. I was sitting on a yacht in Sydney (Australia) Harbor having adult beverages with business clients. My Australian hosts raved about ABBA, a new singing group from Sweden, that had gained great popularity in Australia.

I bought the album, ABBA Greatest Hits. How could you not love the upbeat music of four Swedish singers named Anni-Frid, Bjourn, Benny and Agnetha (ABBA is an acronym using the first letters of each member’s first name)?

Benny and Bjourn wrote almost all their songs. I’ve listened to each song hundreds of times. For me, their music has never grown old. For this movie, they were listed as executive producers and both had cameo appearances.

In 2013, Greta and I were on a Holland America cruise that stopped in Stockholm for two days. We saw on a tourist map that there was a new ABBA museum in Stockholm. No ship crew members, including the captain, knew anything about it.

On day-two of our port visit, we took a city bus to a park on the far side of Stockholm where the map indicated the museum was located. After an hour, the bus passed a building with a red carpet leading up to it. That’s the museum, we surmised, and got off at the next stop, and walked back.

Lo and behold, it was the ABBA Museum. Lots of people milling around. Near the red carpet, there were TV cameras showing the peacock logo, as in NBC. At that moment, I didn’t connect the dots.

Opening day at the Abba Museum in Stockholm

We lined up to get tickets to tour the museum. The lady behind the counter said, “I’m sorry, this is our very first day, we are sold out, there are no tickets.”

Greta said, “We are from California, here on a cruise ship. Our ship leaves today at 5 p.m. We will never see it.” Then, Greta gave the woman one of my Picket Fence Media business cards. The lady said, “You are a journalist from Southern California?”

“Let me check with my boss.”

We spent an hour in the ABBA Museum on it’s first day of being open and loved it. My biggest regret: not buying a “I was there first” t-sheet.” 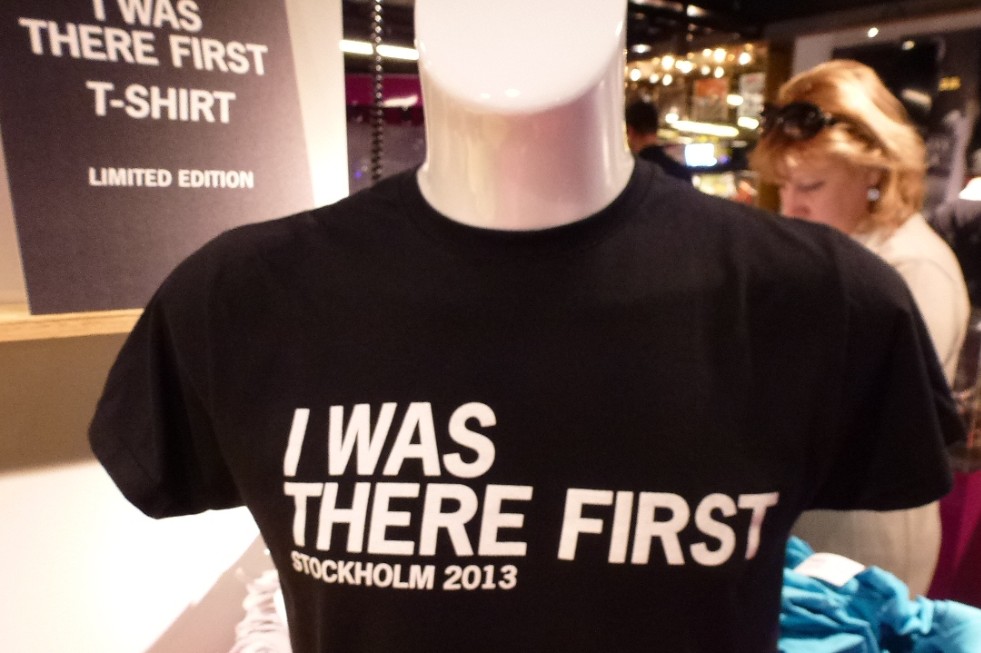 When we came out, we took advantage of a photo opportunity. 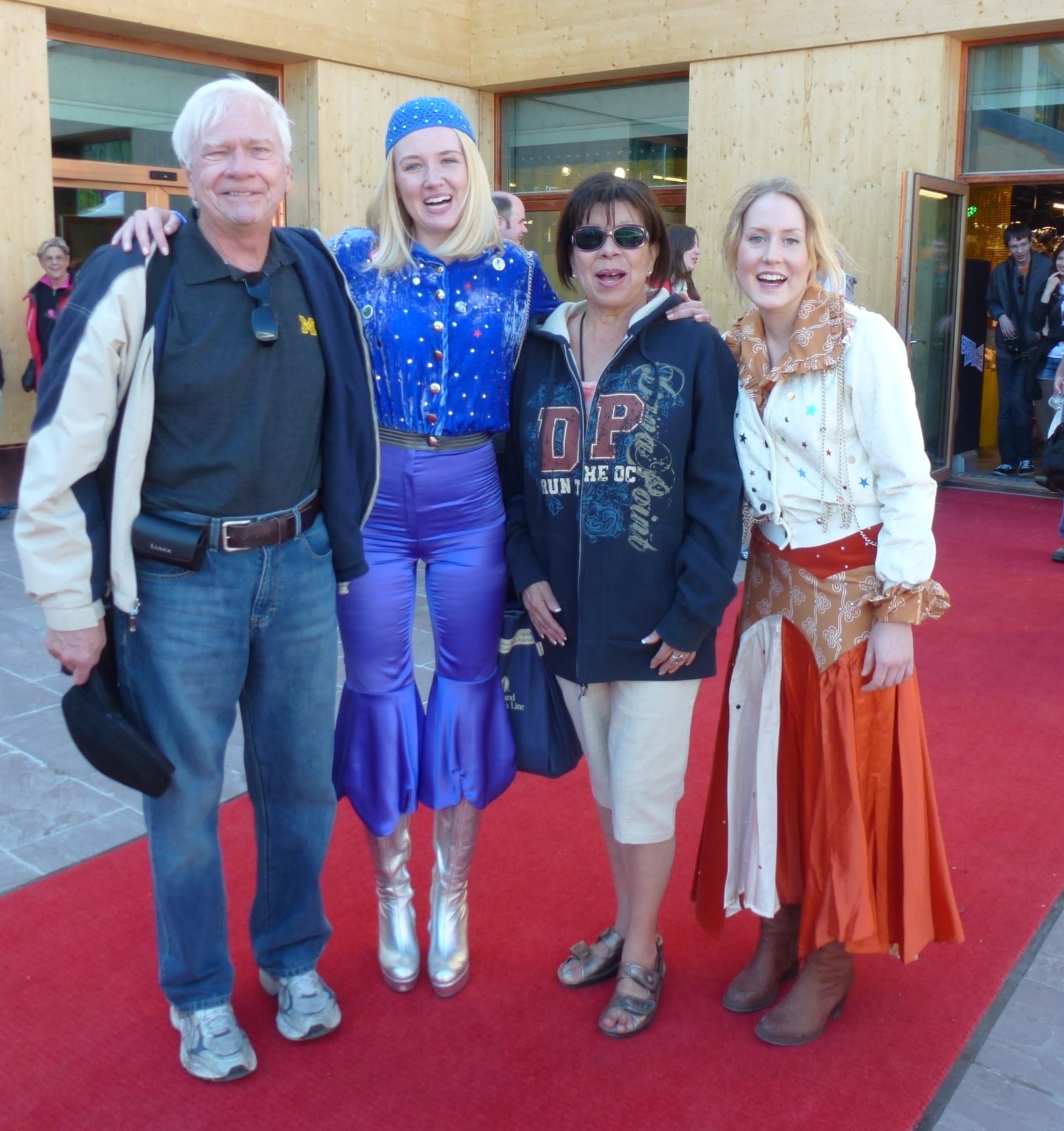 ABBA impersonators of Anni-Frid and Agnetha, with Tom and Greta

We checked out the peacock cameras. I had seen similar cameras before, when I had been on the Today show twice. I said to Greta, “We aren’t leaving. The Today show is going to cover the opening. And, there is Natalie Morales-Rhodes, doing sound checks with Today in New York.”

We established a position four feet from Natalie. There were maybe 100 people gathered around. 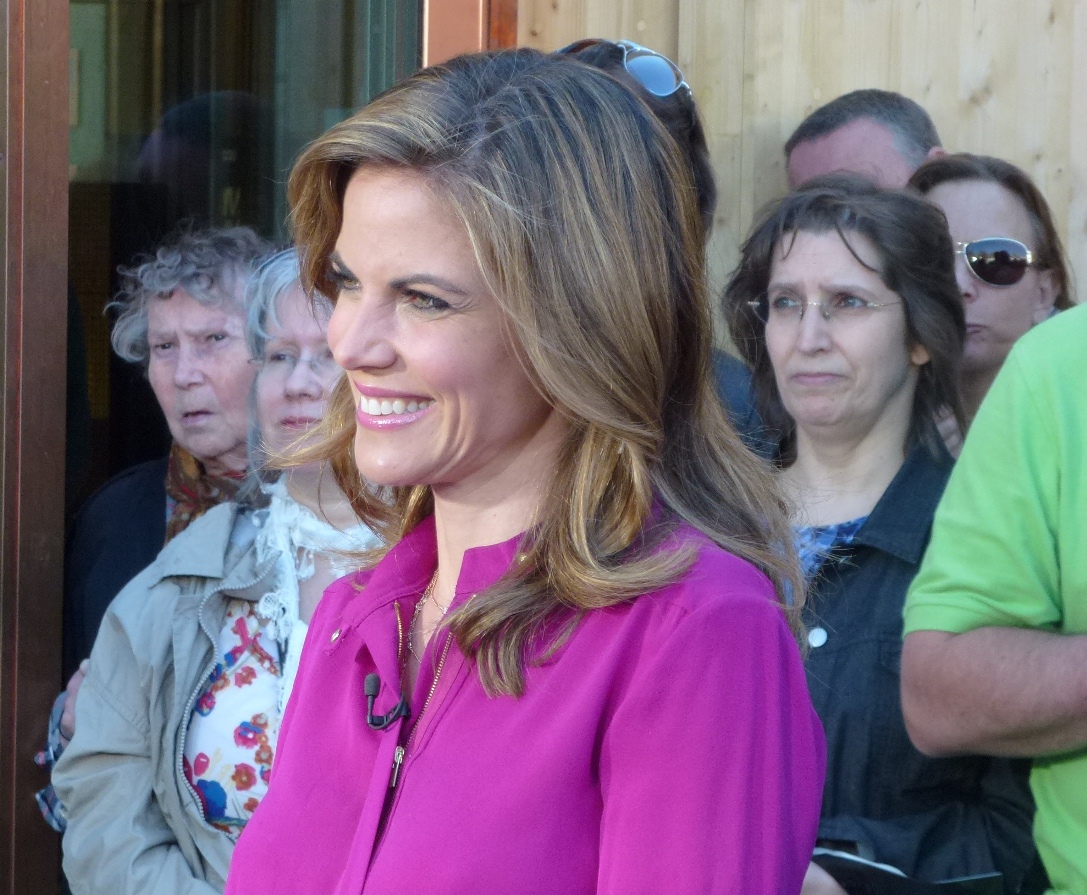 Natalie Morales-Rhodes at the ABBA museum in Stockholm 2013

Then, a rumor started to spread that Bjourn and Anni-Frid were going to be interviewed by Natalie. With that rumor circulating, within minutes, virtually 10,000 Swedes descended on the red-carpet area. We could hear Natalie talking to Matt Lauer. There was a Swedish-buzz in the air; seldom did any ABBA members make public appearances.

Our ship was scheduled to depart at 5 p.m. We were at least one hour away by bus. It was 2 p.m. Delay, delay, delay. I started to think: Greta and I had to leave. But, finally, with easily 15,000 Swedes surrounding us, Bjourn and Anni-Frid appeared. It was exciting.

Bjourn and Anni-Frid (in sunglasses, to right of hand holding camera)

Greta had moved over to be in the shade, it was a bloody hot day. She was two inches from the two ABBA members when they entered and exited an adjacent building. She said, “They practically bumped into me.”

When the interview ended, I couldn’t find her, amidst the crowd. We had to catch a bus.

We made it back to the ship. Late. It hadn’t sailed yet. There were 15 other passengers on the bus with us. The ship wouldn’t dare leave with so many passengers ashore. And it didn’t.

So, going to the new Mama Mia! movie had special meaning to us. Because of the ABBA music, the beautiful Croatian setting, the talented actors and actresses, the movie was very entertaining, albeit a little trivial. There were flashbacks and flash-forwards that were confusing, especially for people like Carl, who hadn’t seen the original. Kathy kept explaining to him what was going on.

Also, Kathy’s family roots are from Sweden, which helped her understand all of the movie confusion.

For me, the “Dancing Queen” scene was the most enjoyable. Also, “Waterloo,” set in France, was lively. And the song “Fernando” was well done with Cher, playing a grandmother, singing a duet with Andy Garcia.

If you are an Abba fan, do not miss this movie. You’ll be on your feet dancing! It won’t win best picture, but it will contend for best musical score. Ah, it was a pleasant daytime date in Palm Springs in the sweltering heat.