I don’t often go to movies. My partner Greta loves movies, and usually goes with friends or alone. I surprised her–and myself–by suggesting we go on Saturday over the Memorial Day weekend to the 4 p.m. Book Club movie. Date night for us.

The TV ads for Book Club suggested that the movie might deal with topics we cover in the newsletter: The need for seniors to have social interaction, to get out with friends, and to incorporate mental stimulation into their lives. The genre was romantic comedy—nothing too heavy, which appealed to me.

Also, the four primary characters were mid-60s women, which is pretty much my target audience. I knew it would be primarily a “chick flick,” but thought it would be entertaining.

Greta belongs to a book club that meets once a month; she hosts the group once a year. In my opinion, her belonging to the book club is good for her; she has female friends and they have a great time. This photo shows members holding the book To Dad From Kelly, about Denver Broncos and former University of Michigan tailback Rob Lytle, written by his son, Kelly Lytle. Kelly autographed a copy for each member.

Rob passed away in his 50s from CTE, a brain disease caused by brain trauma, which has happened to many football players. Rob Lytle was a friend of mine. 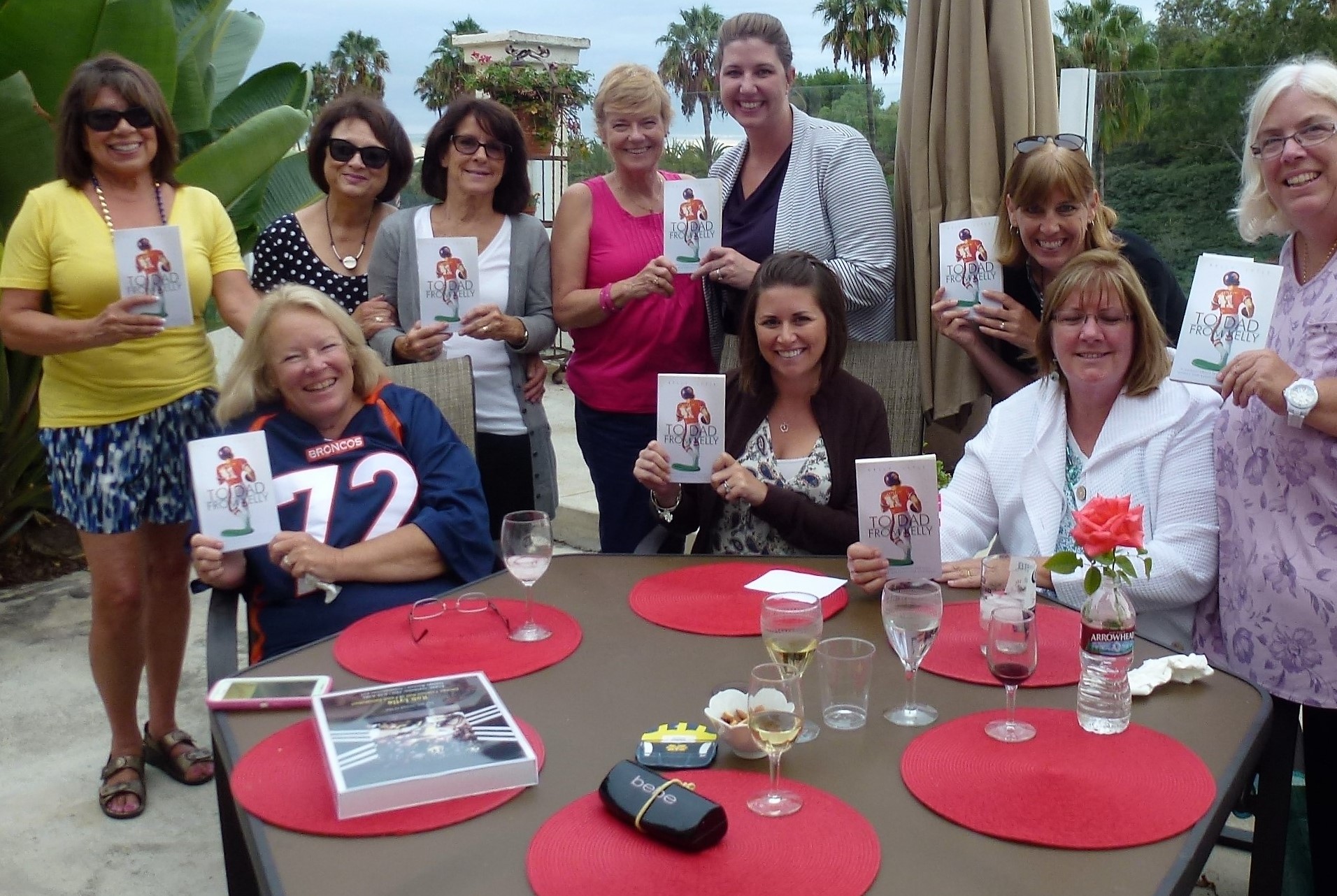 Greta’s book club with autographed book, To Dad From Kelly

“Did you order tickets on line ahead of time?” she asked.

“No,” I said, “it’s an early show on a Saturday, there will be plenty of seats available.”

At the ticket window, I was surprised that there were only a few available seats, and they were in rows one and two, so we were closer to the screen than we like. OK, I admit, I should have listened to her and ordered seats online.

Since we were in row two, I didn’t notice how many men were in the audience. But I did notice that most of the laughter, and there was plenty to laugh about in the movie, came from women. From the male perspective, I thought the movie was great. Very funny.

The four accomplished actresses had been in a book club together for years:

-Diane Keaton, widowed for a year, after a 40-year marriage, has two daughters who live in Arizona, who think she should come and live in the “cleared-out basement” of one of their homes.

-Jane Fonda, single, a successful hotel magnate, wanted no strings attached to any man because years before, she had gotten hurt by then boyfriend Don Johnson, (of Miami Vice fame), who resurfaces during the movie.

-Candice Bergen, divorced, a federal judge, had been celibate since her marriage ended 18 years before, attends her son’s engagement party, and sees her ex-husband with a woman about 30 years younger than he, which opens her eyes that she should start living again. She turns to online dating.

-Mary Steenburgen, married, but her 35-year marriage is in a funk. Her husband is depressed and in love with his aging Honda motorcycle, and doesn’t want to be bothered taking dance lessons with her.

It was a feel-good movie. Very funny, great script writing with humorous lines. A surprising amount of focus on senior sex issues but done with class and humor. There is a scene where Diane Keaton, who has a fear of flying, climbs over an airplane seat, in which the male passenger is asleep, which is hilarious.

Keaton is also involved with a department store escalator scene that is also funny, but has an underlying message: because we’re seniors, doesn’t mean we can’t hop on and off escalators without injuring ourselves, although our kids think otherwise.

Much of the movie’s book club discussion is based on the members reading the book, Fifty Shades of Grey, and the book’s two sequels. The books inspire the actresses to reexamine their lives. Some critics I read feel the movie’s multiple references to the book were too much commercialism, but I didn’t have a problem with that.

Another issue that was dealt with is children trying to overly influence their older parents lives.

The movie’s settings are in Southern California and Arizona, with much beautiful scenery around Scottsdale and Sedona.

There were approximately 20 songs in the movie’s soundtrack. I loved the nostalgia of Paul Simon singing, “Late In The Evening,” Tom Petty & The Heartbreakers,’ “Runnin’ Down A Dream,” and Meatloaf’s “I’d Do Anything For Love.”

Life Messages for seniors from the movie Book Club:

-Don’t worry about what other people think. Do what’s right for you

-Give love a chance in later years

-If you are too set in your ways, lighten up, loosen up. Take chances. Fonda tells her women pals why she breaks up with Johnson: “He doesn’t want to change me, he listens, he cares for me.” The honesty scares her. The other three set her straight

-We are never too old to enjoy life. Go for it. Spice it up. Don’t worry about tomorrow

-Venture out of your comfort zone. There are plenty of examples of that in the movie with all four actresses

**
No movie is perfect. Not everyone will like it or approve of it. But I sure the heck enjoyed it. I won’t spoil the movie for you other than to say it ends on a warm and fuzzy note.

After the movie, as we walked next door to Hendrix restaurant, Greta took my arm and said, “What a great date night! I loved it.”

As we sat at the bar, enjoying a drink and snacks, I took out a piece of paper and jotted down some notes about the movie for this column. The bartender said, “I know you owned that Tutor and Spunky’s Deli; I hope you aren’t writing a critique of our service.” I smiled and said, “Nope, I’m just making notes for my column about Book Club, the movie we just saw.”

A 60-ish woman, Cindy, and her husband, Jim, were sitting next to us. She heard my comment to the bartender. She said, “Oh my gosh. We live in San Clemente and read your columns in the San Clemente Times newspaper.”

I said, “You’ll read about this one in next week’s paper.”

I thought about the evening. I had stepped out of my comfort zone and it had paid off—my partner was happy, and we made new friends, with a bartender, and a San Clemente couple, who live in the same neighborhood where Greta has had a home for 35 years.

Good things happen when you get out of the house.

Three weeks ago, I wrote about the Paramount Pictures movie Book Club in this newsletter and in my newspapers. Somewhere online, the publicity department at Paramount, read my column. They contacted me. They are going to use my article in the press release they are sending to 2,000 regional and local newspapers and their websites, to promote the movie when it gets released on Blu-ray and DVD. Should be in late August or September.