Senior Romance on the back of a Harley. Why not?

In a November, 2007, Finding Love after 50 newsletter, I included a quote from a woman who lived in San Luis Obispo, California. She emailed, “I have been on Match.com off and on for several years, but I am not attracting the type of person I want. Twenty-five percent of the responses are from bikers, so I must have something in my profile that attracts them.”

In the same newsletter, I responded to her: “You are likely attracting bikers because they like to drive there and would enjoy having someone to party with while ‘in town.’ For some reason, I picture those two buffoons in the movie Sideways, which was filmed near there.”

A Champ, (before you were called Champs) Patricia, was disappointed in my response to that woman: “I live in San Luis Obispo County (Paso Robles) and I actually live in the town where they filmed a lot of Sideways. Many ‘bikers’ live and work in the area and aren’t just passing through to party with someone.

“I was also on Match, Yahoo, eHarmony and other sites, had quite a few dates and a couple of short-term relationships over a five-year period.

“Two years ago, when I was 52, I read a profile of a man, 53, whose road name is Cowboy, that said: ‘Don’t let the biker thing scare you off. We are not a bad group; you might want to meet me before you make a judgment. A lot of us are real nice men.”

Turns out, Patricia had a first date with biker Cowboy for coffee. A couple of days later, they had a second date: “We went for a motorcycle ride down to Morro Bay on Saturday, he bought me two dozen roses on Sunday and we have been together ever since,” Patricia said. Now that is a nice way to begin senior dating in a relationship.

In 2009, when How 50 Couples Found Love after 50 was published, Patricia’s and Cowboy’s story was included (Chapter 12, Love on the Back of a Harley). At the end of each chapter, there is a brief Lessons Learned section. One of the lessons from their story was: “When searching for a mate later in life, expand your horizons, your reach, and, even your thinking. Open your mind to new adventures and new activities.”

This week, Patricia sent an update on their relationship: “My husband, ‘Cowboy,’ and I are still together after 12 years (married for over 10 years).

“Life is good and older singles should not give up on finding that someone special. My advice: Broaden your mind and consider the unexpected. I never expected to be some biker’s “Old Lady”, but I’ve never been happier and more in love.

“We both still work at a military installation and are starting to think about and plan our retirement together. We are taking a 10-day cruise to Alaska in September. This has been on my ‘bucket list’ for years so I’m very excited!

“Here are photos from when we first met, and from now, just for fun. 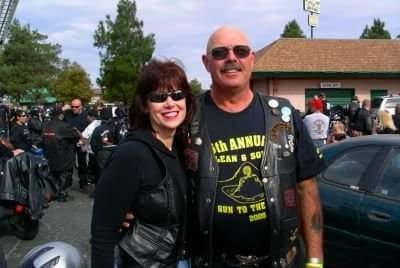 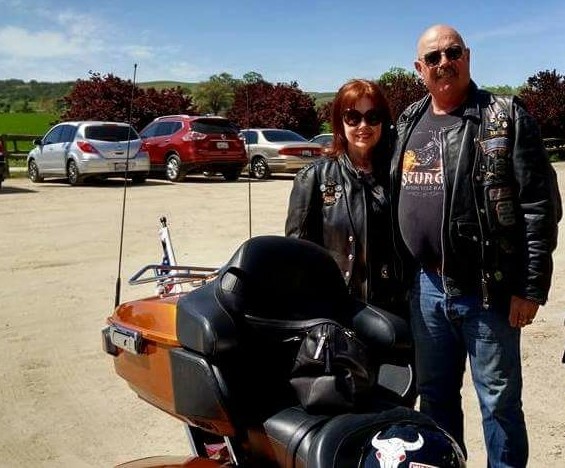 Patricia and Cowboy – 2017
As a coincidence, along the same line, Champ Stella recently emailed, “A good man is hard to find, and so, apparently is a good woman.​ The few gems out there are quickly snapped up. So, always cast your net into the waters for you never know when there will be fish.”

Older singles can improve their chances of meeting a potential mate by jettisoning old stereotypes and beliefs, which can mean being open to people of different religious beliefs, ethnicities, income levels and family situations.  I am in no way suggesting that people settle for less than they desire.

As Patricia discovered, if a nice biker man enters your life, give him a chance, you never know where you might end up, it could be on the back of a Harley holding two dozen roses.

Note from Tom: My book, “How 50 Couples Found Love after 50,” is about senior dating, senior romance and senior love of 58 couples. The book was to have 50 couples featured. But, just before it was printed, eight fun and wonderful senior love stories were sent to me. So, I included them as a bonus.

For seniors wondering how to meet a mate, this book has 58 suggestions.

The book is available on Amazon, in hard cover or ebook format:

Link to How 50 Couples Found Love After 50