As Super Bowl LII (52) approaches next week, I can’t help but think back to 1968, 50 years ago. Two events happened that year that I’ve been reminded of every year since.

After serving three years in the Navy, much of it on a troop carrier in the South China Sea, at the start of the Viet Nam war, I spent a year at The University of Michigan getting my MBA degree. Upon graduation in 1966, I was fortunate to be hired by American Airlines.

In 1968, when Super Bowl II came around, I was a regional manager of public relations, working at the American headquarters at 633 Third Avenue in New York City.

Four days before the Super Bowl, the Vice President of Public Relations, a distinguished man named Holmes Brown, summoned me to his office.

He said, “Tom, I just got off the phone with the president of American Express. They have invited our two world stewardess queens, Patty Poulsen and Jill Spavin, to be their guests this week-end at the Super Bowl festivities in Miami. But, I can’t let Patty and Jill go on their own. I want an American Airlines escort to go with them to be sure they are safe and treated with dignity.

“As the only single man in our department, I would like you to go. Will you do it?”

He patted me on the back and handed me five one-hundred-dollar bills. “All expenses are paid for, but I want you to have money in case you need to pick up a tab. I want American Airlines to always look good.”

On Friday night, Patty, Jill and I flew to Miami. A representative from Amex picked us up at the airport and took us to the hotel. For the next three days, my focus was to keep them safe. 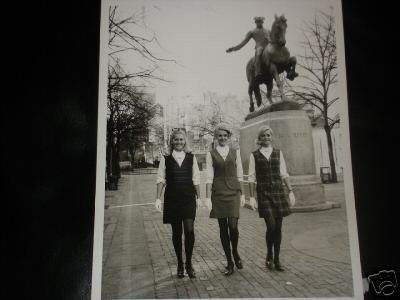 Jill Spavin on left and Patty Poulsen on the right near Paul Revere Statue circa 1968. Photo courtesy of Pinterest

Of course, it was an incredible week-end. The three of us sat on the 50-yard line in the Orange Bowl with George Mira, a former University of Miami All-American and San Francisco 49ers quarterback. Hundreds of Mira’s admirers stopped by to greet him; they were curious about Patty and Jill who looked beautiful.

I remember riding in the bus to the game sitting next to a young kid named Mike Garrett, a Heisman Trophy winner, who years later would become the athletic director of USC for 17 years. He asked me what was in the cooler on the back seat of the bus, I said, “Chilled beer.” He said, “Oh, I wanted a Coca Cola.”

It’s hard to believe there have been 50 Super Bowls since that experience. Each year, I smile when I watch the game.

In 1970, Patty appeared as a flight attendant in the movie Airport.

There was a singer/songwriter from Brooklyn named Neil Diamond who was starting to get noticed. I heard him sing a song called “Brooklyn Roads” on a NYC radio station. Having lived in Brooklyn myself for a while, I loved the song, which was about Diamond growing up there, living two floors above a butcher shop. He attended high school briefly with Barbara Streisand.

I didn’t realize, of course, that he would become my all-time favorite singer. In 1969, songs such as “Sweet Caroline” and “Holly Holy” topped the charts. Later, the album “Beautiful Noise” became a part of my permanent collection. As did, “Jonathan Livingston Seagull,” with songs I treasure to this day.

I’ve seen him perform in concert about 15 times.

This week, Neil Diamond announced his retirement from performing. Greta and I were fortunate to attend his 50th anniversary concert last August at the Forum in Los Angeles. It was fabulous.

He performed my favorite Neil Diamond song, “Dry Your Eyes.” This song is not as popular or well-known as many of his others. But for me, it’s the best. He co-wrote it with Robbie Robertson of The Band, as a healing song after the assassinations of Martin Luther King, JFK and RFK. The trumpet solo near the end is staggering; it reminds of “Taps.”

Diamond cancelled the last part of the 50th Anniversary tour that was scheduled for New Zealand and Australia. He has Parkinson’s Disease. He will continue to write music and work.

So, yup, I’m looking back over the last 50 years today. Pardon me for the nostalgia. I’ll be smiling once again when watching the Super Bowl next week. I wonder where Patty Poulsen and Jill Spavin are now?

And, to acknowledge Neil Diamond for his incredible 50 years of music, I’ll play “Dry Your Eyes” one more time. But, it won’t be my last.

Here is the link to Neil singing “Dry Your Eyes” at the concert Greta and I attended last August. Note that he dedicated this performance to the English terrorism victims in London and Manchester. Put it on full screen for maximum enjoyment.

Here is the link to Neil singing “Dry Your Eyes”