One of the offshoots of the pandemic is that Champs are tapping into their personal reservoirs of creativity.

Several Champs have mentioned they are working on creative projects. Perhaps it’s because they have more free time than usual. Or, they are reflecting on their lives and what’s really important to them. It’s interesting that several men are working on writing projects such as autobiographies, blogs, or books. Women are painting, gardening, and exercising more.

Patrick Hynes, a native of Australia, is writing a postcard blog that he emails to his friends. It’s titled, “Patrick’s Brief Encounters…Snippets of my life in America.” Working as the Public Relations Director for the Anaheim Hilton Hotel years ago, he met many famous people. Each weekly postcard contains a photo and about 150 concise words. Patrick’s first postcard was about meeting Muhammad Ali. Here’s the photo of him and Ali: 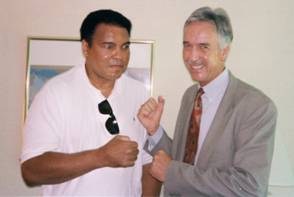 Champ Pam Peters, San Diego, has created more than 100 paintings during the pandemic. She has created boxes of gift cards that feature her paintings. (By the way, Pam happens to be my sister; she’s the creative one in the family). Here’s one of the 100 she’s created during this pandemic. 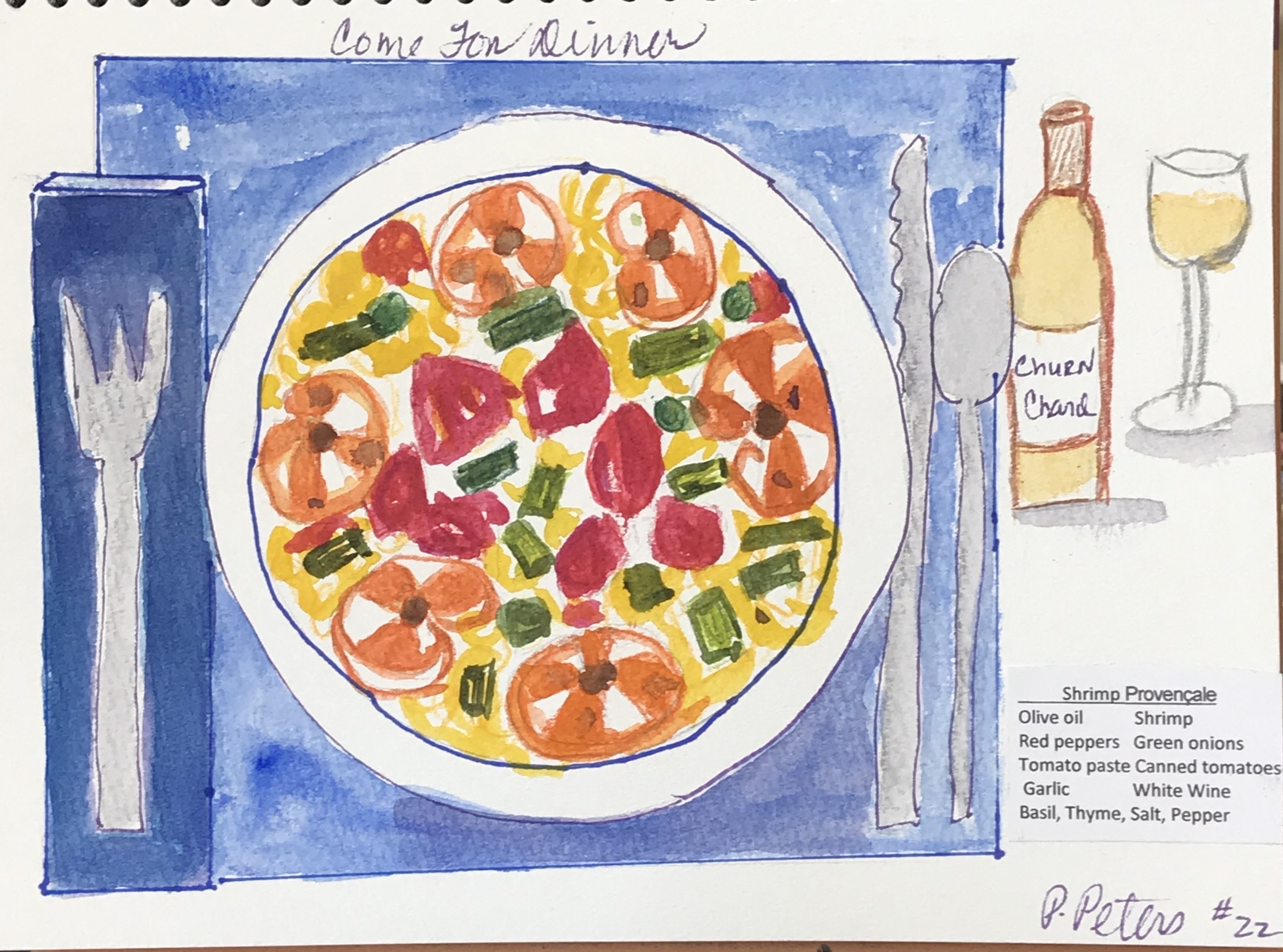 Champ Sandy, Sonoma County, California, also paints, “I have been painting more and creating cards from it…just a lot of fun. I’ve been dormant on writing but have started writing in my head again..and I can feel it about to jump out.”

Champ Rick O. is writing about his career as a former professional baseball player. His writing project is temporarily on hold while dealing with several serious family-health issues, which, understandably, take a higher priority than the writing.

Champ Teresa has been creative in a different way, one that has taken time and patience but is changing her life. In the August 21 eNewsletter, I wrote about refinancing my home. Teresa capitalized on the information. How so?

This week, she emailed, ‘Wanted to thank you for the referral to your broker Vanessa Schwartz. My refinance/loan closes Tuesday, a day after my 64th birthday. Yea! I am really jazzed as my monthly payment will be about $300 less than before, allowing me to stay in my home for a few more years after I retire at 70, probably (Italics by Tom). My neighbor refinanced with Vanessa as well. We are both grateful for this opportunity to lower our interest rate and payment.

“I’m doing a little ‘happy dance’ right now, in honor of your willingness to help a stranger.”

In a coincidence, Teresa and I (and Patrick Hynes) worked for the Victoria Station restaurant chain, eons ago, but we didn’t know each other.

I’ve been friends with Rick Lenz for merely 65 years—we were classmates at Jackson High School, in Jackson, Michigan in the 1950s. Rick is a retired successful actor (played opposite Ingrid Bergman, John Wayne, Lauren Bacall, Walter Matthau, and Peter Sellers among others). He has written several books, including his latest novel, which will be published early next year.

Here is my favorite piece of art that Rick has created. This painting hangs on my wall. 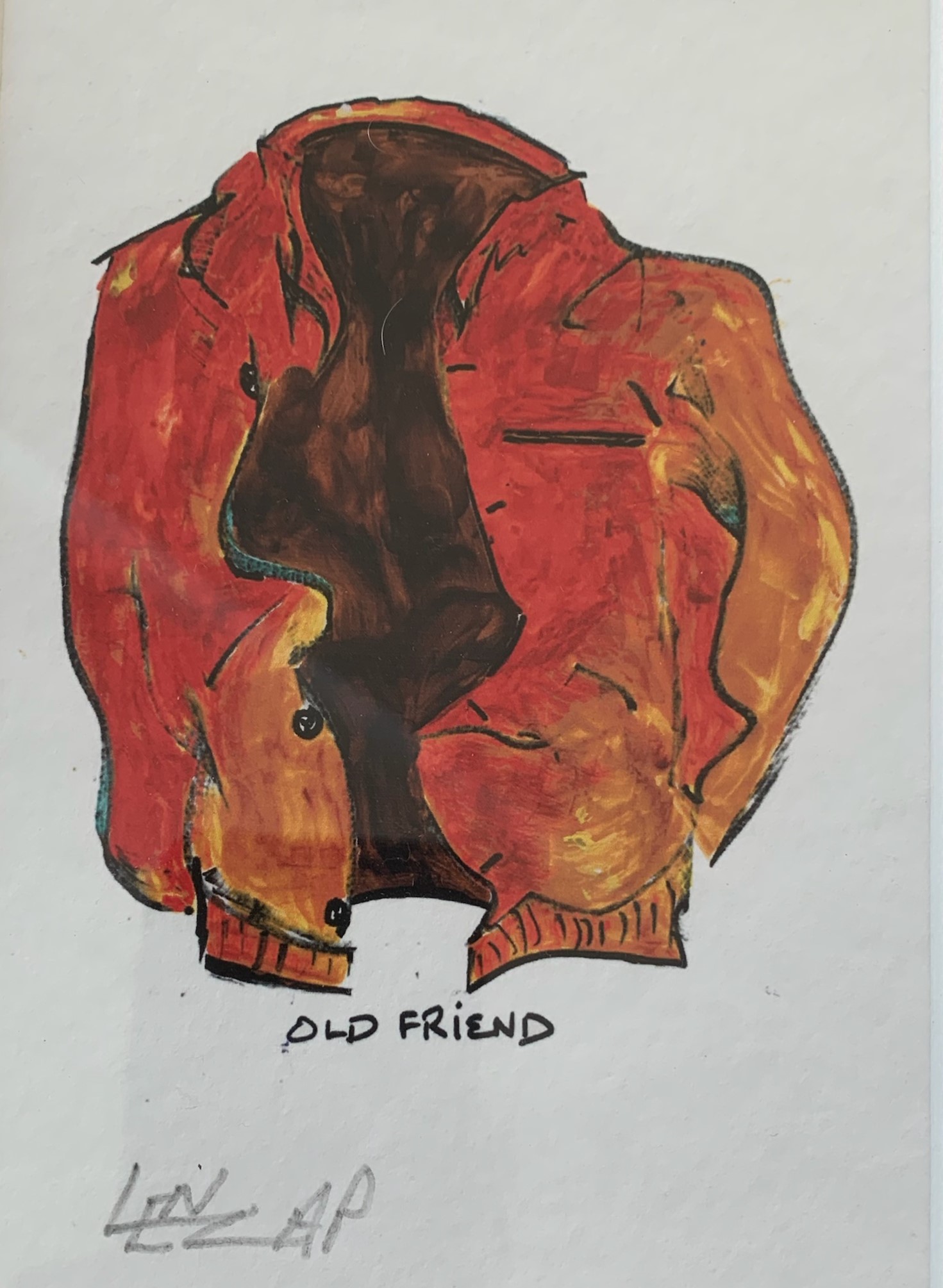 Check out this creative man at http://www.ricklenz.com (Lots of wonderful art like this)

Another high school classmate is Carmen (Carm to me), who lives in Barra de Navidad, Mexico. Carm was featured in our May 29 eNewsletter which is posted on the FindingLoveAfter50.com website. Carm is writing an autobiography. He and Patrick Hynes often send me rough drafts of their work for my comments.

Last Friday, Carm sent a draft of Chapter 10, titled, “My Life with Karen.” Carm was a friend of Karen and her husband Charlie, and when Charlie died, Carm spent time ensuring she was doing okay. The relationship grew and they had five special years together before she passed away on August 1, 2019.

As I was perusing Carm’s Chapter 10, I noticed he included a cluster of four pictures of Karen and him. The caption under the photos reads:

Loving her was easier than anything I’ll ever do again.  –-Kris Kristofferson

That caption blew me away. You’ll see why in a minute.

During Greta’s and my 23 years together, I’ve occasionally mentioned to her that when I pass away, I don’t want a funeral. An upbeat, fun, small, positive, memory-celebration is ok, but only if five songs that express how I’ve felt about her, are played on a video for the people attending. I wrote down the titles of the five songs on an old, tattered, envelope for her to keep in her files.

Three weeks ago, Greta left that envelope on my desk with a written request to put those songs into a word document, so she could access them on her computer desktop (I don’t know why she made that request, perhaps Greta knows something I don’t know!).

Here are Tom’s five songs (and the links to each)

Note from Tom: That’s the same song Carm used in the caption under Karen’s pictures. That’s why I was blown away. I found it hard to believe that a guy I’ve known for 65 years and I picked the same song to honor our partners.

5) Dry Your Eyes (co-written and sung by Neil Diamond)

Note from Tom: This Neil Diamond video I took on my phone at one of Neil Diamond’s last concerts, August 2017, at the Forum in Los Angeles. It’s not a perfect video as I didn’t zoom in until later in the video. But the sound is terrific. Note the trumpet player solo near the end. He is spectacular. It’s nearly impossible to find videos of Diamond performing this song–he rarely played it in concerts. It was originally written honoring Martin Luther King after he was assassinated.

Do you have a song that has special meaning to you or to a loved one? Are you working on a creative project?  If so, please share it with us and tell us why it’s special.